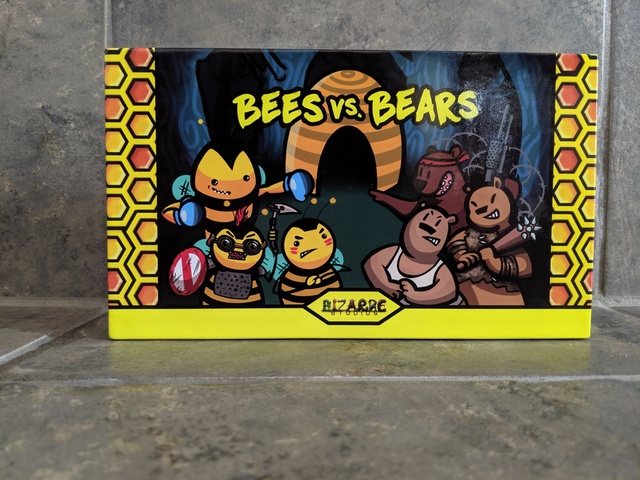 No. of Players: 2-6
Ages: 8+
Playing Time: 10-30 minutes
Find more info on BoardGameGeek.com
From the Publisher:

Bees vs. Bears is a strategy card game in which you play as a hive of bees, defending your honey against the horde of hungry bears. Each player starts with two honey tokens and tries to outlast the other hives. During the game you use special abilities as well as your army of bee defenders, attempting to simultaneously fend of the bears and weaken the other hives!

Bees vs. Bears is a high action, fast paced game with games averaging 10 – 20 minutes. It can be played with 2-6 people and though the game is easy to pick up, it is hard to master as there are sixty different cards, some with more complicated abilities than others. 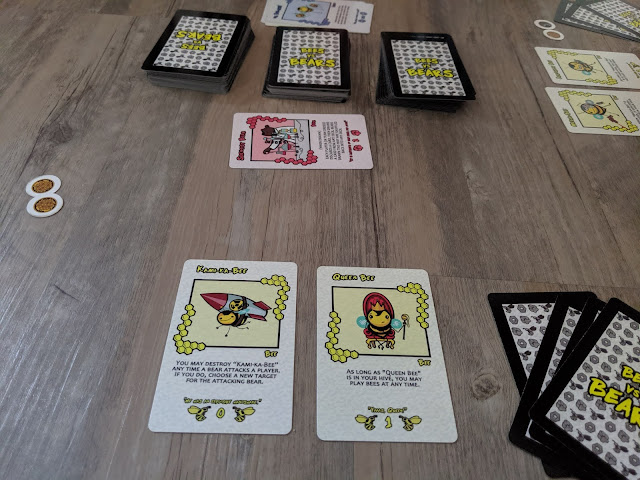 My first thought when I heard the title “Bees Vs. Bears” was: “There’s a sequel to “Bears Vs. Babies?!…Interesting.” So let me clear this up for all you “Bears Vs. Babies fans,” in case you haven’t done your own research yet, these two games are created and published by two different companies, and the game play is VERY different. So continuing on with no preconceived notions, “Bees Vs. Bears” is a malicious backstabbing your opponent, strategic type of game with cute bee & bear graphics and of course includes some fun puns. If you have no sense of humor and get upset when being targeted you may find this game “un-bear-able!” However, if sabotage and strategic tactic games are the genre you enjoy then you will have a blast destroying the bees or sicking bears onto your opponents hives!

I like that it’s a short game, estimated time is 20 minutes which is pretty accurate, I could see it being a bit longer if played with the max of 6 players, regardless, even with a larger group of players it’s a fairly quick game and compact enough to bring with you to a friend’s or a small family gathering.

The rules were simple to read and to understand, however, prior to playing the game it seemed there was some information lacking. For instance, I received the honey tokens along with 6 other tokens that showed a queen bee on one side and a bear on the other, we didn’t use them because I could not figure out their purpose. I learned via Bizarre Studio’s facebook site that this is actually meant to be the metal coin for the cards that require a coin toss. Being that my version is a prototype I really can’t fault them for omitting this information as I’m sure a metal coin would be much more obvious to its’ purpose, although it would still be helpful to know that the queen bee is “heads” and the bear is “tails” since heads or tails is the terminology stated on these types of cards requiring the coin toss. 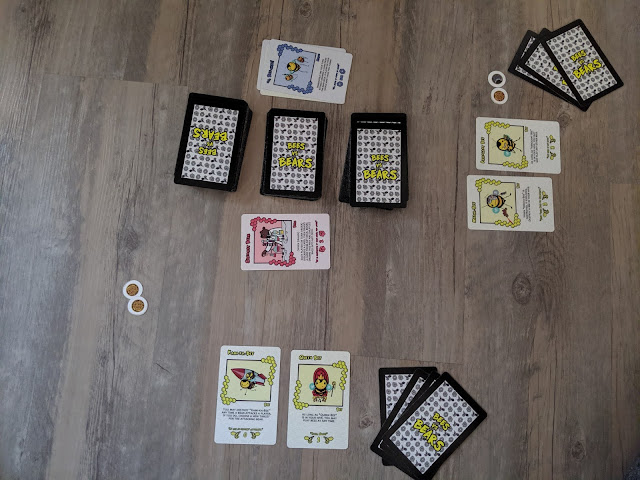 Another card that stumped us briefly was the bear cards that state “(upon feeding)…” Do we willingly give up our honey to feed this bear in order to gain the effects? Or do the effects only occur if the bees in our hive cannot defeat the bear and we are forced to give up one of our honey tokens? We decided to continue play instilling the latter option. As the rules suggest, it really does help to look through the deck and familiarize yourself with the cards. Had I done that first I’d have realized the bear cards have 3 different parenthetical remarks, (if defeated), (when drawn), and (upon feeding). Once we realized this, the cards seemed very self-explanatory.

In conclusion, “Bees Vs. Bears” is a quick and enjoyable card game, the tokens were too thin though and hard to pick up/flip over; also, it wasn’t much fun with just two players, having only the one opponent to focus on and destroy, a minimum of 3 players would’ve been better. I look forward to playing this game with a larger group of friends and have more of a strategic challenge and battle to be the last one standing with honey in their hive!

Like what E.V. had to say? Back it HERE!

Check out Bees vs. Bears and Bizarre Studios on: