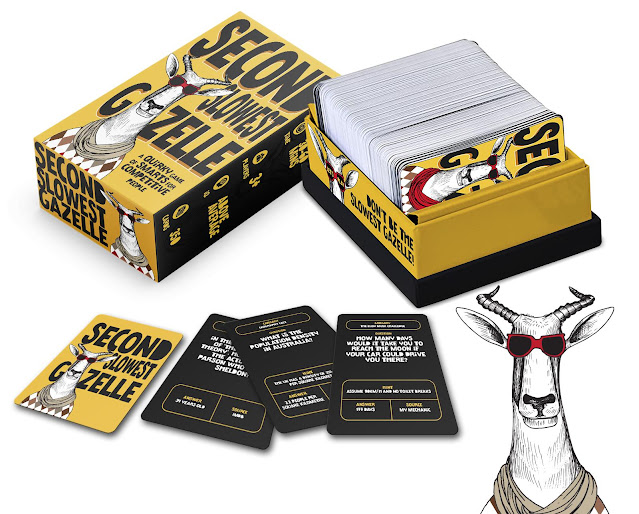 No. of Players: 3+
Ages: 17+
Playing Time: 30-60 minutes.
Find more info on Amazon Australia
From the Publisher:
A quirky game of smarts for competitive people. On the Savanna survival is success. Mediocrity has it’s place. Each round, one player reads out a question. All other players give their best guesstimate of the answer. Not coming last is winning. Don’t be the slowest gazelle! REVIEWS “Best. Game. Ever.” We wish the New York Times said this. “Not shit” Random dude with a ponytail in a game store. “They tried really hard” Our Mums.

Second Slowest Gazelle is a card based trivia game for 2-8 players. In a round one player “the lion” will draw a card from the deck and read the question and the hint (if there is one). The questions are ridiculous and hilarious at once.
The other players “Gazelles” write down their best guess, and hand it to the lion.
The Lion will then read out the other players guesses before revealing what the closest answer was, and shame the player with the worst result.
The player with the highest result becomes the lion and the player with the worst result gets handed the card.
Stop when you feel that you’ve played enough rounds, have gone through the entire deck or dinner is ready!
There are multiple official game variants: you can double down if you feel like you are the expert in the category, removing a card if they are correct, but being given two, 1 from the lion and the question card if they have the furthest answer. Another mode is being knocked out if you have 5 cards in your pile.
The game has some crazy facts and figures, with some jaw dropping cards.
I really enjoyed playing this game with 4 people, but it can definitely be played 1v1 or with a bigger group.
This is one of the best new trivia games from an independent publisher, that I’ve seen in quite a while!
Note: Currently this game is only available via Amazon Australia
Disclaimer: The publisher provided the prototype copy of Second Slowest Gazelle. The opinions expressed in the review are completely my own.
Check out Second Slowest Gazelle and Nicolas Pasquier on: 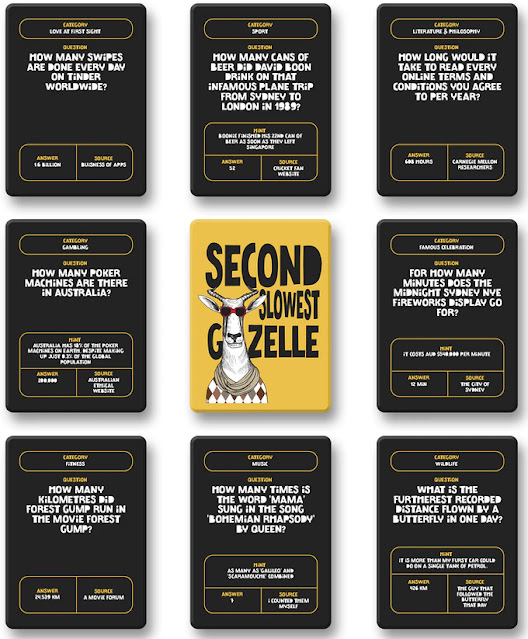 Reviewed by: Harry from Australia