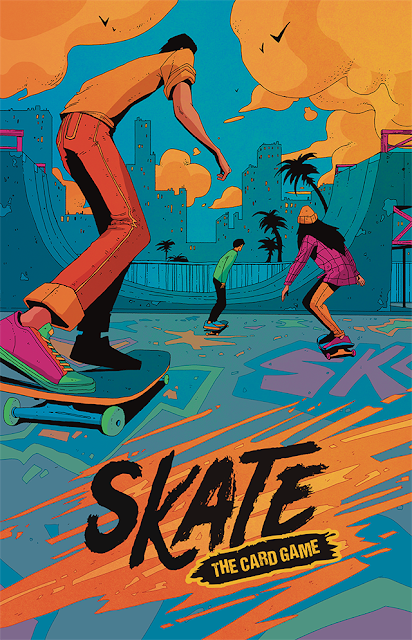 Skate: The Card Game
Publisher: Self-Published
Designer: Christian Shelton
Number of Players: 2-4
Ages: 8+
Time: 15-30 Minutes
Find on KICKSTARTER HERE.
Skate: The Card Game is a casual, fast-paced tabletop game for 2-4 players (or up to 8 players with two copies of the game). The goal is to land five tricks before your opponents — without eating pavement!
An average session lasts between 15 to 30 minutes and can be enjoyed by skaters and non-skaters alike. A unique, two-card hand limit lends itself well to the fast-paced nature of the game while offering the opportunity for strategy derived from sparsity.
On a player’s turn, they must perform one of the following four actions:
Push to get the right cards.

Plant cards to set up the trick.

Kick players to hinder their progress.

The game ends as soon as a player has successfully landed five tricks.

Skate: The Card Game was designed by Christian Shelton, a digital marketer who has worked with Hunters Entertainment to bring multiple tabletop games to life via Kickstarter, such as Alice is Missing and Altered Carbon: The Role Playing Game. It melds together two of Christian’s long-time passions: tabletop gaming and skateboarding. It was designed for fans of one, the other, or both!
Skate: The Card Game will be live on KICKSTARTER until Thu, February 4 2021 10:00 AM PST, and has a funding goal of $10,000.

Back it on Kickstarter today