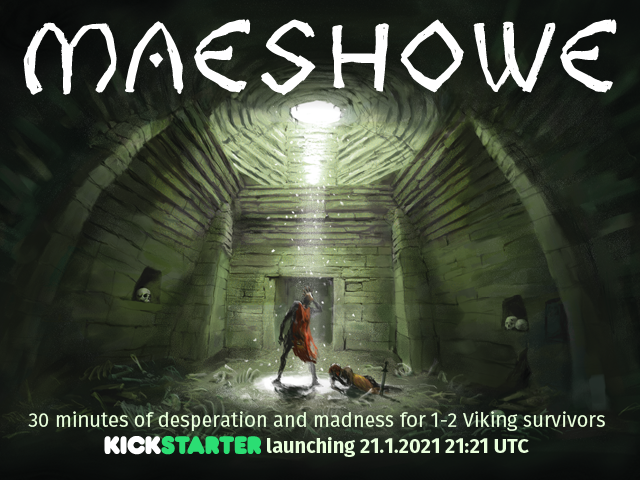 Maeshowe: an Orkney Saga is a small, co-operative hand- and resource-management game for 1-2 players. The game plays fast – 15-30 minutes –  but it offers a surprising amount of depth and decision space in that timeframe. The theming of the game is pretty unique – vikings and tomb-breaks may be commonplace in boardgames but do you know of any where you’re not looking for treasure? This is a survival game – your only goal is to make it out alive. To do that you must cooperate and the discovery of treasure is a distraction from your goal… Trapped underground and praying to your gods, Maeshowe: an Orkney Saga is short, brutal and dark.

The game takes its inspiration from real-life events – something else unusual in boardgames unless those events are wars or natural disasters. The Icelandic sagas are commonly thought of as proto-histories – that is they mix real history with myth and legend. In fact, though the sagas can be divided into two broad types – those written several centuries after the events they chronicle, which do contain elements of myth, and those describing contemporary events in the eleventh and twelfth centuries AD. These are more historical in nature and one of these is the Orkneyinga Saga, which tells the lives of the Jarls of Orkney (an archipelago off the northeast coast of Scotland) in the twelfth century.

One of the more fantastical events in the Orkneyinga Saga describes how Jarl Rögnvald Kali Kolsson broke into the Neolithic Tomb of Maeshowe – a place which had many legends told about it at the time – to look for treasure. It’s said that he did find a vast amount of wealth there and that, about to leave for a crusade, he buried the treasure for safe keeping. Three years later, in AD1153, Jarl Harald Maddadsson was travelling between two of the islands in Orkney at Yule. When a sudden and violent snowstorm broke out, he and his men desperately sought shelter. Spying, through the swirling snow, what they thought to be a house, they climbed the roof when they couldn’t find the door – and so they tumbled into the tomb of Maeshowe. The saga tells how they had to dig themselves out and how two of Harald’s men went mad whilst trapped in the tomb.

Rögnvald’s buried treasure has never been found but, amazingly, when the Victorian antiquarian James Farrer excavated Maeshowe in 1861, he found an empty chamber – the walls of which had been carved with the largest collection of Runic graffiti outside of Scandinavia. Some of it even purports to be carved by Rögnvald’s men. The most fantastic stories in the saga thus appear to be true!

In Maeshowe: an Orkney Saga, you’re cast as Jarls Harald and Rögnvald. Trapped in the tomb, you must dig yourselves out in order to survive. To do this, each turn you must play and discard one card from a hand of five. Playing a card activates that card’s effect but discarding many cards also has an effect. For example, playing four ‘Excavate Passage’ cards in a row, to make a set, will help you escape the tomb by clearing a section of the passage that leads to the outside. Discarding a ‘Run out of Food’ card will see you lose one health. Health and food resources are both tracked on the game board, as is your progress in escaping from the tomb – recorded by removing passage tokens from the board.

Difficulty in the game can be easily increased or reduced by changing the number of passage tokens added to the board during setup. The game also comes with several mini-expansion sets of cards with unique effects that interact with the core mechanisms in different ways, adding to the variety and replayability of the game.

This is possibly the best small-box solo or co-op game since Onirim and the most challenging since Friday. It’s going live on Kickstarter on the 21st of January at 21:21 UTC.

Maeshowe: an Orkney Saga will be live on KICKSTARTER until DATE, and has a funding goal of $1500.
Find out more at BGG.