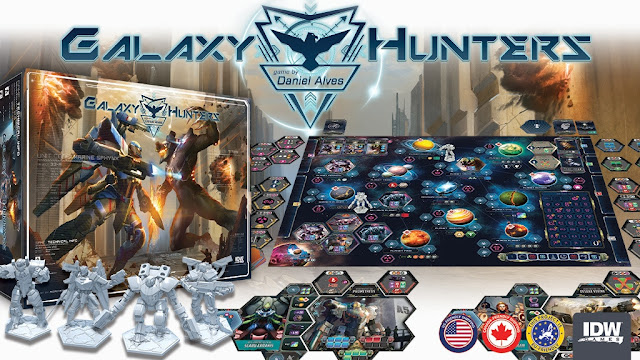 Galaxy Hunters
Publisher: IDW Games
Designer: Daniel Alves
Number of Players: 2-4
Ages: 14+
Time: 60-90 Minutes
Find on KICKSTARTER HERE.
You’ve been recruited by the MegaCorps to pilot the pinnacle of humanity’s technological advances. Choose your mech wisely, for your skills in the hunt depend on your synergy!
IDW Games dives back into deep space with Galaxy Hunters. Designer Daniel Alves (Masmorra: Dungeons of Arcadia, The Towers of Arkhanos) seamlessly blends the excitement of crafting a unique character with the deep strategy of classic worker placement. Featuring an innovative neural link system, your choice of pilot and mech guides your interstellar strategy from first deployment to final scoring.

This fully competitive game launches 2-4 mercs into the star system. Traditional Euro-style worker placement takes you across fourteen planets as you gather resources, buy upgrades, and recruit specialists to your cause. Once your weapon systems are online, you can begin your fight against the mutant threat to harvest their DNA, accomplish Megacorps missions, and become the most famous hunter in the galaxy. Between mech/pilot combinations and extensive upgrade options, the replayability is exponential for endless adventure.

Don’t take our word for it, take theirs!
“Combining the different mechs with the different pilots can really change up how you play each game! You’ll end up with the same pilot you had in a previous game but with a different mech you’ll say ‘Wow, that’s an ability I’ve never used before so I’ll play this a little bit differently’. Which makes me super excited to play more!” – The Dice Tower
“What I like is there’s a lot of combos hidden within these, especially across your player board, the upgrades, even your pilot upgrades. There’s synergies…it almost feels like a light engine builder! It feels really satisfying to make those combos happen.” – Man vs. Meeple
Take the helm and join the fight today on Kickstarter!
Game Name will be live on KICKSTARTER until Fri, September 18 2020 2:00 PM MST., and has a funding goal of $80,000.
Find out more at BGG.