ARMPAL is a cross-age 3D wooden assembly tabletop game suitable for entertainment between 1-4 people, which could be perfect for either party games or family entertainment.

We designed quick-removable and replaceable head kits to expand the playability of Armpal.

Based on the same set of control system and robot arm, we have designed three sets of components: manipulator caliper, excavator bucket, and magnetic crane.

In only a few seconds, you can quickly transform your device.

ARMPAL can be used for multiple entertainment modes such as single-player entertainment, two-player battles, and multiplayer cooperation.

📦The players can use the mechanical robot arm-calipers kit to stack up the wooden cube blocks in turn in the central areas on Armpal exclusive table mat.

If one side fails to stack or the wooden block tower falls down, the other side wins the game.

⏳The time limit of this mode is 3 minutes.

⚖️The players can use the magnetic crane kit to scramble for the goods in the central area and move them to your own stacking area.

The game is over when all the goods are moved out. The very side who moves heavier goods wins.

One of our reviewers had a look at ARMPAL: 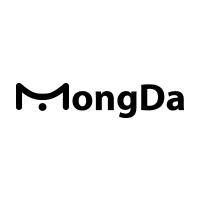