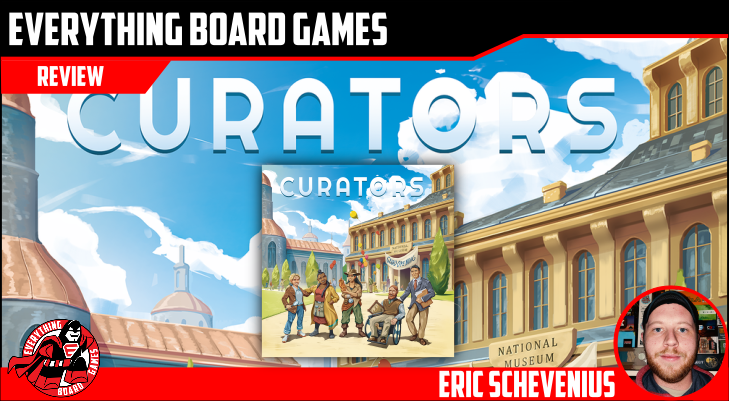 From the publisher:
Curators is a Euro-style, tile-laying game for 1-4 players in which players build museums and their collections to attract visitors.

Your job as curator is to expand the museum and its collection. With help from your employees you will build new wings and collect objects to put on display in the museum. When the game ends only one museum will stand as the victor and take home the “Museum of the Year Award”. 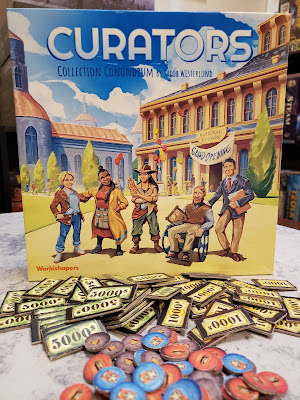 Overview
Who knew it could be so stressful curating a museum? You have to oversee all the operations! You need to build new wings, find new objects to display, restore, and exhibit the objects, buy objects from the auction house, and manage all of the finances! On top of all of that, you are also trying to compete with other museums to win the prestigious “Museum of the Year Award”! Best of luck to you! 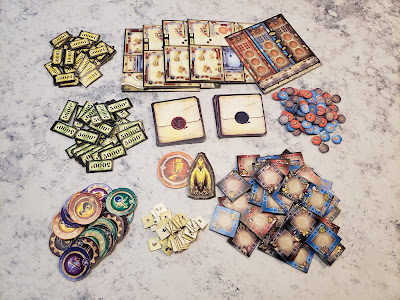 Components, Setup, and Learning the Game
What’s in the Box?


The majority of the setup is getting the different tokens out (money, visitors, and objects) and placing them in easy to reach piles. You will also place the wing tiles in a spiral pattern in the center of the table, ending at the end game disc in the middle of the spiral. Lastly, pass out to each player their employee chips, a museum entrance board, $4000, and their contract cards. Get ready to start curating!

There really aren’t a ton of rules to remember, but the rulebook for Curators was well laid out and thorough in its explanation of the game. Most of the rules make thematic sense, so it makes it a fairly simple game to catch on to. During my first play, I only referenced the rulebook a few times and that was just to remember some of the details of a couple of the actions. It is a very condensed ruleset and I mean that in a positive way. You are not bogged down with a bunch of rules, but there is still plenty of depth and strategy to the game. Moreso than a typical game that shares roughly the same rules density. In other words, it punches above its weight. 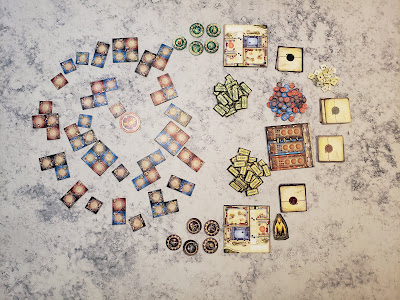 Gameplay
The goal of Curators is to end the game with the most victory points. Victory points can be scored through a variety of ways including, Exhibited objects, completed wings, completed contracts, unspent money, and the (optional) advanced scoring rules. On your turn you will allocate one type of employee. The different employee types are carpenter, archaeologist, collection manager, restorer, and financial manager. I will summarize the actions of each, but please know that there will be finer details involved. 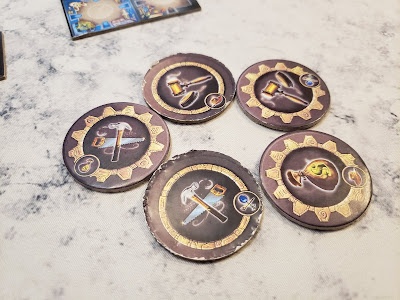 The carpenter will build wings for the museum. The archaeologist obtains objects to place in your storeroom and items also go to the auction house. The collection manager buys objet=cts from the auction house to place in your storeroom. The restorer exhibits items in your museum and gains visitors, and the financial manager collects money from the visitors.

On your turn, with your employee chips in front of you, you choose an employee to allocate and thus doing their corresponding action. If you have two of the same type of employees (2 carpenters for example) you can double allocate and do the action twice. The neat part of the action selection process is that when you do an action, you flip over that token and it reveals a different employee. This mechanic really allows you to manipulate how and when you are going to do what actions.

The contract cards give you a goal on how to build your museum. If you build your museum in the pattern shown and have exhibits in each of the rooms, you will score the indicated victory points. 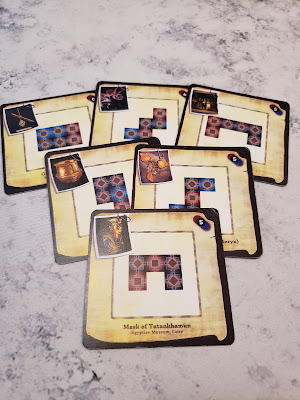 Play will continue like this until the last wing is built, then players have 2 more turns each to try to maximize their points. At the end of the 2 rounds, end game scoring occurs. You will score 1 VP for each $4000 unspent money, VPs indicated on your completed contract cards, VPs indicated on your completed wings, 1 VP for each object in your museum, and any additional advanced rules if applicable.

The curator with the most victory points wins! 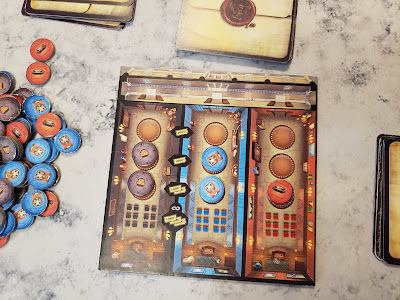 Theme and Mechanics
In the game, you take on the role of a museum curator. Who doesn’t enjoy that theme? Everyone has been to a boring museum, right? One that you aimlessly walk through imagining how much better you could make it if you run the place (No? Just me?). Not only is it a unique theme, but it all also works seamlessly together with the mechanics of the game, as well.

Curators is equal parts pattern building and action selection that combines for a game that is not only a puzzle you are trying to piece together, but also an engine you are trying to keep running smoothly. The puzzle of the pattern building is great, but I had the most fun with the employee allocating. You can get a really nice flow of turns in which your employee engine is running smoothly and then you have a little hiccup and scramble to get back in sync and running smoothly again.
The Good
Ths game really forces you to think ahead. You are trying to figure out how to build your wings so that you can get more contracts and how to order your employee actions to get the flow of turns you need to curate a successful museum. It can all be overwhelming at times, especially for people like me, who don’t have the best spatial puzzle-solving abilities, but you’ll have a rewarding feeling when you pull off a string of efficient and well-planned turns.

The various ways to score victory points allow you a little wiggle room on forming the best strategy to curate the best museum. While, most of your VPs will probably come from completed contracts and wings, you can still score a lot of points from exhibited objects and unspent money, if you play your cards right. It can be a tight game and a few points here or there can be the deciding factor between winning or losing.

Without question though, my favorite part of the game isn’t a clever mechanic or a feeling I get when I play it, but rather how the rules compare to the depth. I’ll say it again, it punches above its weight. It is a simple game to learn and a quick game to play, but it will have you thinking the whole time. 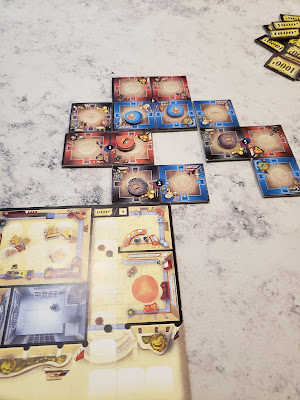 The Other
I really don’t have many complaints about this game. Most of which would be small annoyances anyway, rather than major problems. It does what it sets out to do and does it very well. There is something that bothered me about Curators, though. To be fair too, not all groups will experience this, but we had some major downtime issues at some points during our plays. The spatial awareness and memory of that spatial puzzle is absolutely what caused it. Don’t get me wrong, I enjoy that part of the game, but it can cause analysis paralysis in a hurry. What I mean exactly is, at times, you will have any number of contract cards that you are trying to place together in a puzzle “Tetris-like” fashion, so that you can maximize your space and points, but you also have to do most of it in your head because it is not all laid out in front of you. Some people have a brain adept at thinking like this, others may have to take a few minutes to sort it out in their heads.

It hit me hard a few times during one particular game. I guess I don’t have good spatial awareness and memory, so I took several minutes trying to map everything out in my head. I thought I made the right move, but it soon became apparent that I didn’t. What happened was, I set myself up to fulfill a contract, but I placed the wing tile wrong and ultimately missed out on those points. 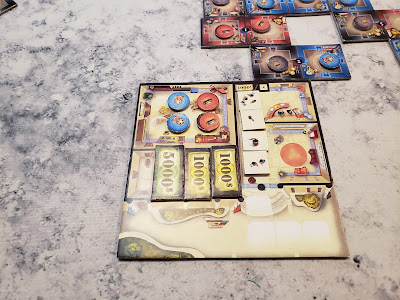 Final Thoughts
There is so much to like about this game, the depth of strategy, the clever action mechanic, or even the unique theme. What really stood out to me was, how all of the different employee actions and systems in the game lent to the theme and how they all worked together. Overall, the game has a balance and flow to it that makes it such a fun experience!

Players Who Like
I can honestly say, there would be very few people that I wouldn’t recommend this game to. That’s not to say that everyone will necessarily like it, but I think that it can cover a wide range of player types. Most people will be able to find something that they like about Curators.
Check out Game and Company on: 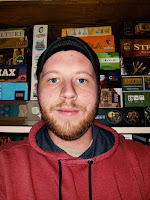 Eric Schevenius – Reviewer
Full-time father, part-time nerd. When not spending time with my family, I try to fill the rest of my time playing tabletop games. Some call it an obsession, I prefer the term passion. Either way, I will play any game, with anybody, at any time.
You can find Eric’s articles HERE.