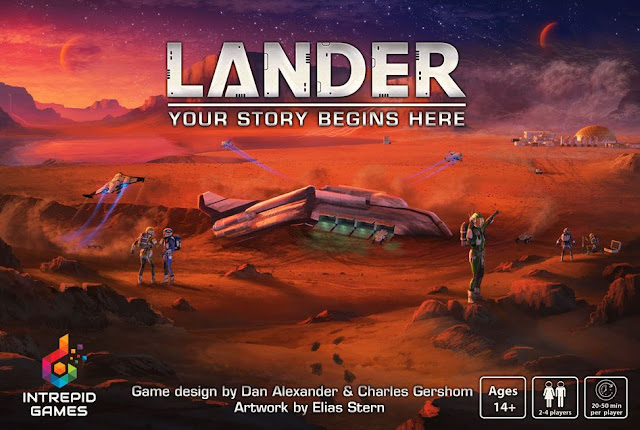 An advance party of 60 highly trained scientists and other personnel set out ahead of the roughly 5,000 initial pioneers to establish a preliminary colony base. However, the landing craft overshot its target site on Kaimas-2 and the ship split in half upon impact, instantly killing half of the crew on board. Only a few were awakened from stasis, as their resources were now desperately low. The other surviving crew—still in stasis—would be awoken once more resources became available. To put an even heavier crunch on things, the pioneer ship was still on its way, unaware of the difficulty the landing craft had sustained.

Lander is a strategy game with resource management at its core. Players take on the role of one of the corporations that set forth to Kaimas-2, an Earth-like planet in a distant system that has high potential for sustaining life. Players must explore the area, competing with the other corporations for a share of the natural resources found on the planet. Develop your resources, train crew, and compete for the most mission stars. The player with the most mission stars by the end of the game wins. 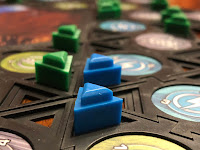 Each round has players taking free actions (exchanging resources and training crew), and one main action, known as an Official Order. These orders let players explore and expand, upgrade their discovered sectors for more resources, play action cards, trade with other players, complete missions, and more. Once a player passes their turn, they are out for the round, unless they choose the Observe order. Be careful how much you Observe, however, as those are limited throughout the game.

Lander also has various modes to play, ranging from shorter to longer, as well as a team-based variant. These differing modes allow for fast and easier games when time is short, or games of a longer nature with deeper strategy and decisions.

A highly strategic game that mixes elements of both European- and American-style mechanics,  Lander creates a challenging and immersive experience. With variable player powers, tile placement, set collection, take-that, a modular board, and more, Lander has something all gamers can connect with. Lander plays 2-4 players (more with the expansion), and has a play time of 20-50 minutes per player (depending on game mode selected). 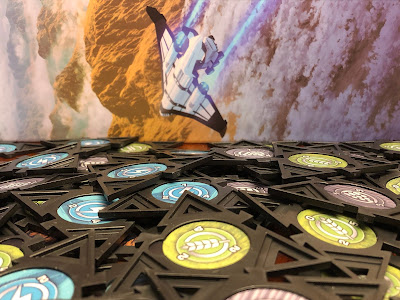 When the pioneers arrive with their spacecraft, will it be your corporation that receives the most praise for getting things ready on time? Or will Kaimas-2 even be ready for them? The decisions you make will affect the lives of countless others. This is your story, and it begins right now.
Lander is live on KICKSTARTER from now until March 23, 2020 and has a funding goal of $25,532 (£20,000).