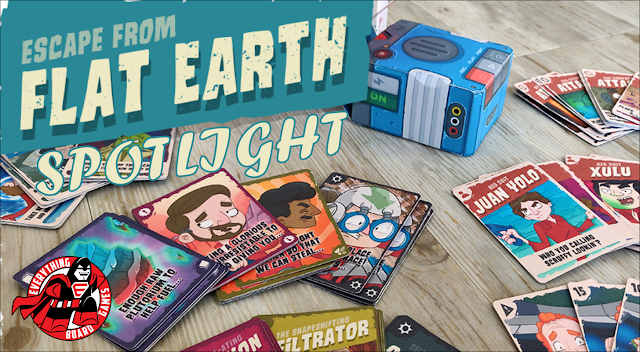 Having found a planet that mocks both physics and reason, it is only natural to send your Red Suits to the flat planet to snoop around and collect vital resources. While perhaps not in the best of colors to be wearing on a dangerous mission, these stalwart Red Suits brave the unknown, narrowly missing hidden dangers (and sometimes almost narrowly missing them) and kind of working together to accomplish their goals. Welcome to Flat Earth. Now…can you escape? 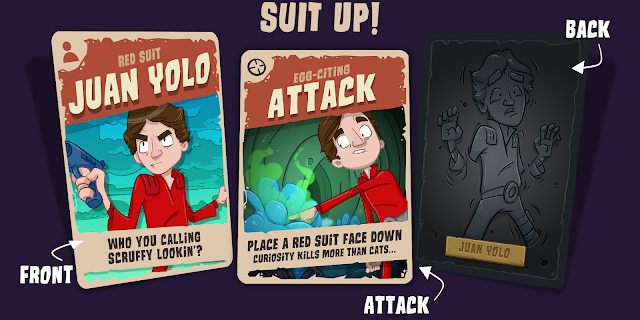 Escape from Flat Earth is a semi-cooperative, narrative-creating card game for 1-6 players. Throughout the game, players discover events, take actions, build a timeline, and ultimately try to avoid the myriad attacks the plant is hiding just for you. If you’re lucky, you’ll find a new color of shirt. Worst case? Well, you don’t make it off this rock. 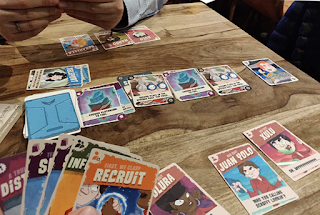 Each player is dealt three random Red Suits, which represent you and your crew. Players start their turn by playing any number of actions from their hand as they like. Then, events are placed on the timeline. To end your turn, simply draw a card from the draw pile. Drawn cards may be events, actions, or attacks. Attacks can make you lose precious Red Suits. Any player who loses all of their Red Suits is out of the game. The first player to place one of their Red Suits on the final event in the timeline wins! Alternately, the last player with any remaining Red Suits is another way to win the game.

Play proceeds in a clockwise manner unless players jump in out of turn by playing certain cards. With a timeline to disrupt and cards that both protect and destroy, Escape from Flat Earth provides a quick, enjoyable experience. For you, the player, at least. For the Red Suits…well, they really should have changed their shirts before heading down.

Escape from Flat Earth is a card game for those of us who know better than to step onto an alien planet while dressed in red. And especially for those who don’t.