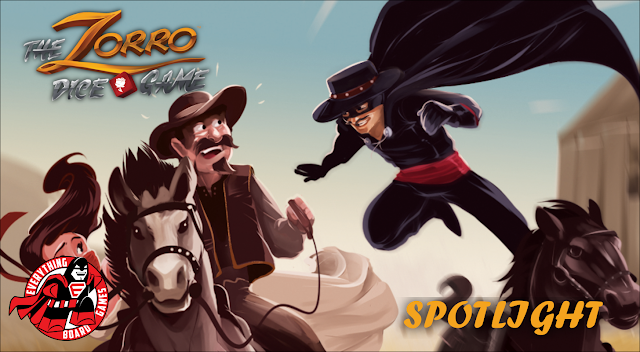 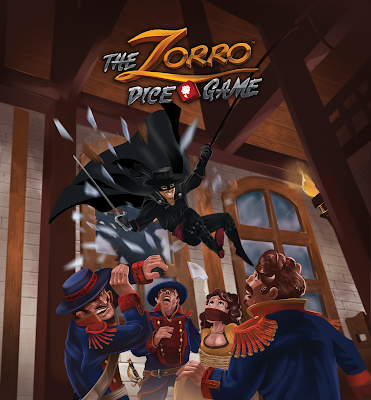 An aging and battle-weary Zorro can no longer adequately defend the people from oppression so he must now find a worthy successor. Prove yourself to him by showing your heroism and proficiency in battle by defeating the scoundrels and villains that are persecuting your fellow citizens. After the final battle, it will be clear who deserves to wear the mantle and become the next Zorro! Will it be you?

Use your dice rolling skills to complete Heroic Feats, earning Equipment and extra dice that will increase your effectiveness. Fend off the Scoundrels to earn even more powerful Equipment to prepare yourself for an epic final battle against the Villain. The base game takes 15-35 minutes and plays 2-6 players. The Heroes and Villains expansion has solo play rules and allows you to play up to 8 players. 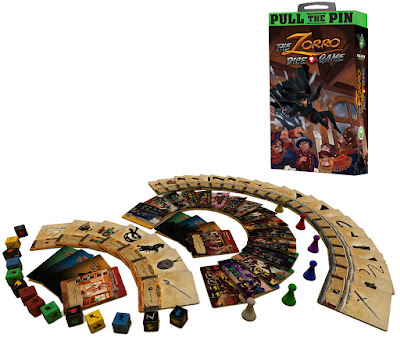 By backing the Kickstarter campaign at any physical reward level, you will get a free pack of extra Equipment that will help you in your adventures. You can also pick up the first expansion, Heroes and Villains, which will come out in stores a few months after the base game, so you’ll have it way before anyone else. You can also get the fancier Kickstarter-exclusive deluxe version of both the base game and expansion with upgrades like metal dice, custom meeples, custom sleeves, and more!

The Zorro Dice Game is live on Kickstarter now until November 16, 2019, and has already surpassed their funding goal of $5,000.