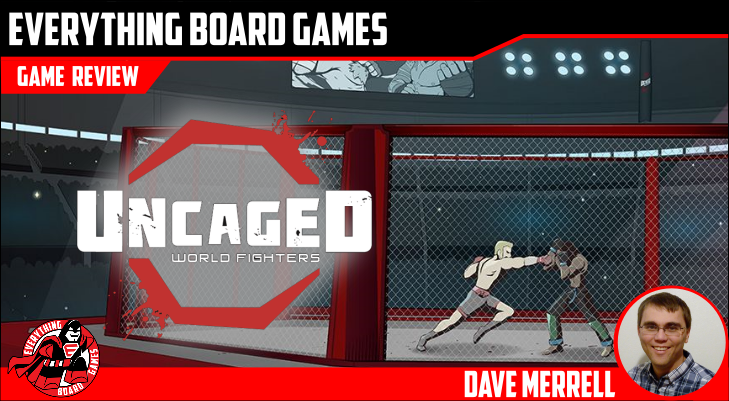 Oh boy! Mixing MMA and a card game. Let’s see how this goes!

Uncaged: World Fighters is a two player game trying to mimic the action of a real MMA fight. The game is played over three rounds (if both fighters last that long). Each round consists of four combinations, and each combination consists of five “moves.” In each round, each player is on offense twice and on defense twice.

On offense, the player is trying to cause as much damage to their opponent as possible while the defense is trying to break up the combination or dodge as many blows as they can. Some moves cause the fight to go from a standing fight to the ground, and some bring it back up to the standing position (each round starts in a standing position). Some moves in your combination can only be effective from one of the two positions, while others work on the ground or on your feet.

Players first choose a character. Each character has unique health, stamina, and a special ability. The level indicator card is placed to standing, and each player takes either the offense or defense deck. The players shuffle their deck and draw five cards, plus an additional card for each stamina point their character has. From those cards, the player selects five to lay down in a combination trying to anticipate what the other player may do. Then, in order, the offensive player reveals their first card and determines if it is valid (i.e. you can’t use a ground move if you are standing); if it is, then the defensive player reveals their card, checks to see if it is valid, and damage is recorded for each player as necessary. If both players still have health, then the combo continues in this manner through all five cards. Once the combination is done, players swap decks and each assumes the opposite position of offense or defense. This happens four times per round, and when a player’s health is reduced to zero, they are knocked out and the game is over. If neither player is knocked out, each round is scored by how much damage was done in that round, and the player with more round wins is the winner.

There are also special cards in the defense deck that can change everything. They are called combo breakers and they are played on defense. If the requirements of the combo card are met (usually a specific move by the offensive player), then the combo is broken and the rest of the cards are not played in that combo. Offense and defense also switch immediately, which is a tough blow to the offense.

The game components arrive in a fairly small box and are convenient for travel. The components are high quality with exceptional artwork and a theme that is well matched for its intent. The rulebook is very well written, and players will be scoring takedowns in no time with a quick setup and easy mechanics. 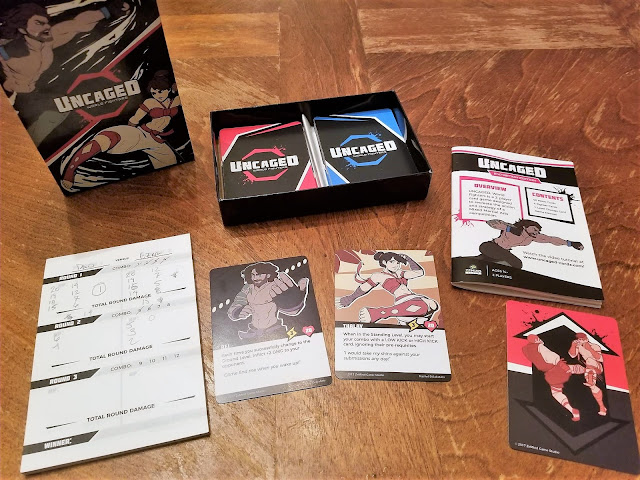 The game plays true to its advertised recommendations. Most of our games were on the shorter end of the time frame, as we never made it to the end of three rounds. I think the age recommendation might be a little high. I think an 8+ or 10+ would be more appropriate (perhaps the designer is concerned with content, but I think most 8-year-olds know about MMA, and the cards are far less violent than the real fighting).

For those that are intrigued by Uncaged, there are currently Kickstarter expansions in the works for this game. The Good: This game is ready to play. Quick setup, solid rules, and great components make this game quick to get to the table and quick to play. The size and one-on-one style is also a plus for many players.

The Bad: I didn’t love the combination play; it seemed like out of the 20 cards you would play in a round, you might actually use seven of them. It felt like a lot of time flipping cards over and then moving on because they were not valid. That is definitely part of the strategy, but to me, if you aren’t even “playing” for half the game, it seems like a bit of a waste. Others may love this idea as it does relate to the theme slightly.

Final Thoughts: Uncaged: World Fighters didn’t live up to the action of a good MMA fight for me, but it seems to come as close as you might be able to play with cards. For a light, quick, and strategic game, it might be worth a try if the MMA theme gets you going. 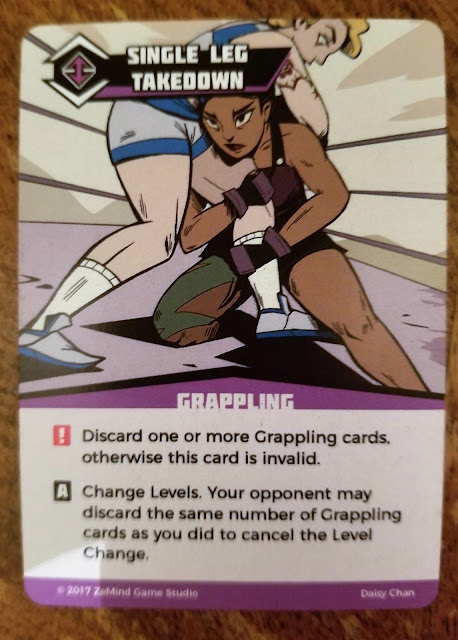 Players Who Like: War, MMA anything, convenient and quick travel games with a little strategy.

Check out Uncaged: World Fighters on:

On KICKSTARTER now. Campaign ends September 25, 2018.
About the Author: