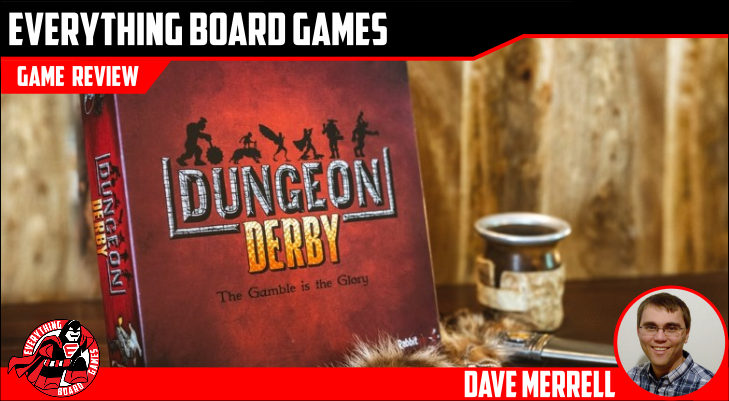 WARNING: This is a preview of Dungeon Derby. All components and rules are prototype and subject to change.

Wanna race? Come to my Dungeon!

Dungeon Derby is a game mostly unlike any I have ever played before. In the game, you take on the role of one of the six Champions of the dungeon. Each Champion is racing for prize money (1st, 2nd, and 3rd in varying amounts for each race). In addition to the prize money, each player bets on as many Champions as they wish in each round, with varying payouts for winning bets. Players have various Treasure cards that can affect the Champion’s ability to speed up or slow down in each race.

Each player starts the game by selecting their Champion. I’m a huge fan of the blue guy with the roller. Each player has treasure cards to start the game and each round. These treasure cards contain one of three items: Armor, which has an effect on the individual hero for the duration of the round; Encounters, which have an effect if the Champion lands directly on it; or Spells, which affect the gameplay during the actual race. When the Dungeon Master turns everyone loose, players race to play Armor or Encounters on the Champions or the race path. The reason it is a race because if items clash, then the Armor played first controls. Likewise, with Encounters, there can only be one on each space of the track and there can only be two similar Encounters on each track. With players being able to see the possible Encounters a Champion may have to deal with, and knowing what Armor they played on each Champion, but with other Armor still a mystery, and based on the spells in their hands, each player bets on the Champion(s) they think will win. The Dungeon Master then rolls two dice repeatedly, one with the 6 Champions on it and one D6. The Champions move the number of spaces indicated plus or minus any modifications created by Armor, Encounters and/or Spells. When one Champion crosses the finish line, money is divvied out. The game lasts for the prechosen number of races (rounds) with the player having the most money at the end being the winner.

For my review, I only had the prototype of this game as the Kickstarter is in motion and the designers have told me they are working on some things already so I won’t dwell too much on those issues much. The biggest issue we had was the rulebook. We had to ask some questions to where we got to the place where we were playing the game as correctly as the designers intended. The crazy thing is, it did not matter much. This game is fun no matter how you play it. We played three times wrong and enjoyed it every time. When we got it right, it did not matter much. But the designers have assured me that the rulebook is a focus of efforts through the Kickstarter process.

Setup for this game was surprisingly easy. When I opened the box, I assumed that it would take a while to set up, but it was very simple. Each player takes a Champion board, either through selection or randomly. Each player takes a set of bidding tiles, $250 and three treasure cards. To set up the board, you decide how many rounds you want to play (depending on your time constraints) and place that many round cards on the board. Sort the Encounter tiles and lay them in their slots and stack the couple of draw decks to play. That’s it, amazingly simple.

The theme of the game is pretty fun. Who doesn’t love a good dungeon game? The Treasure cards also follow the theme well. The real issue with that is that you are playing the game so fast that there isn’t time to slow down and enjoy the theming of those cards. The speed of the game adds to the intensity and fun, so it isn’t a problem except that the designers probably spent a lot of time making them cool and nobody has time to enjoy that part of it.

The game plays almost exactly to the published information. I think the age is appropriate because of the speed. The number of players is appropriate, except that this is listed by the designers as a “party game.” I think this could be a good party game if players team up, but it plays just fine as a regular tabletop game which is a neat feature. The game time is adjustable, which is always appreciated.

The components are solid (for a prototype). The chips and tiles are all a heavy cardboard. and I can’t wait to get my hands on the miniatures. I even need to see if I can get the roller guy (Roque & Roller, get it?) in a gnome size so I can put him on my lawn. That would be awesome.

The Good:
Dungeon Derby is a mix of everything you love about your favorite games. Fast Paced, Betting, Miniatures, Strategy, Dungeon, Luck and the list goes on. This game will scratch any game itch at any game table.

The Bad:
At this point, I don’t love the rule book, but I have all of the confidence in the world it’s going to get fixed. I like this game so much, I’ll help them do it!

Final Thoughts:
I think this game scratches a lot of itch points for a variety of different people. It’s very unique in that way. This is one that is an insta-back for you Kickstarters out there. I promise that no matter what kind of game you like, this fits on the list of those games.

Players Who Like:
Any game. I did see just a touch of Camel Up in this one, but other than that, it’s unique.

Check out Dungeon Derby on:

On KICKSTARTER now! Ends September 6, 2018.
About the Author: