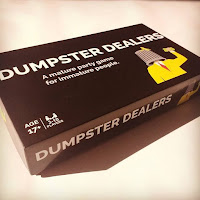 In Dumpster Dealers you will be playing the role of a salesman with the ultimate goal to be the ultimate sleazy salesman. There is only one problem: you do not have any actual products to sell. You will have to rummage through the dumpster and get creative using cards which you will use to create clever sales pitches to other players. The first player who collects the most dumpster dollars in the three different game modes is the winner! 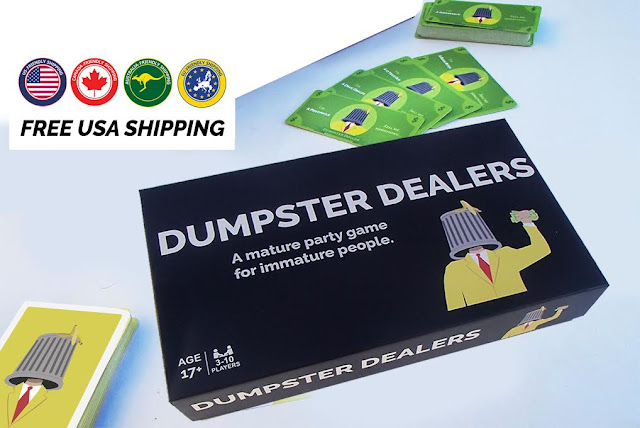 The game can be played in three different modes: Circle of Jerks ,which is recommended for beginning players; Scumbag Salesman, which has players using their creative skills to secure victory; and finally, the Urban Fictionary, which has players guessing who came up with the sales pitch.

In the Circle of Jerks, after each player’s product has
been discussed, the Customer
chooses the product he thought
was the most terrible as the winner
of the round, and awards them the
Dumpster Dollar. They also become
Customer for the next round. The first player to 5 dumpster dollars wins!

In the Scumbag Salesman mode, after each player’s product has
been pitched, the Customer
player chooses their favorite
product as the winner of the
round, and awards them the
Dumpster Dollar. The winner
also becomes Customer for the
next round. After each round,
players draw 2 new cards to get
back to 8. The first player to 7 dumpster dollars wins!

In the Urban Fictionary mode, at the end of the round, everybody gets
to vote on their favorite definition
submitted (besides their own). If there is
a majority favorite, that player earns 2
Dumpster Dollars. The person to the left
of the Reader becomes the Reader for
the next round. Once all dumpster cards are out it ends the game and the player with the most wins!