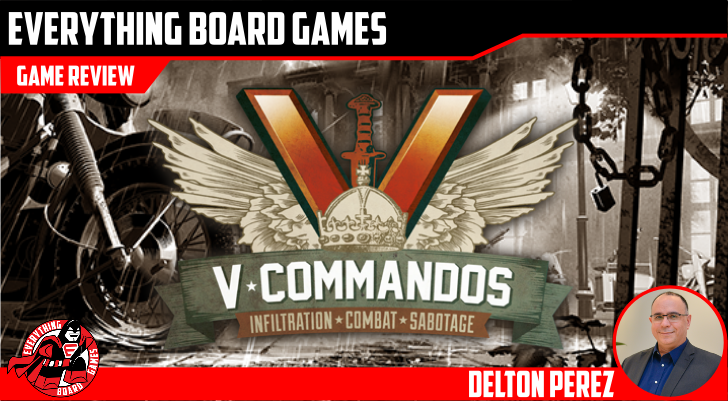 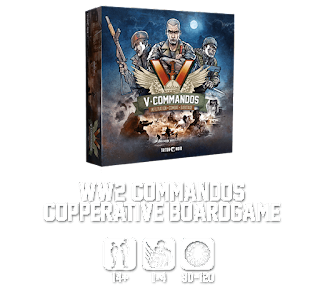 The German army occupies the majority of Europe and nothing seems to be able to slow its progression. The Luftwaffe launches air attack upon air attack against London and the major industrialized British cities. Great Britain withstands and gets ready to face an imminent invasion.

But Winston Churchill was not one to sit back in a defensive stance. Convinced that the Allied Forces must take the initiative and strike blows behind enemy lines, he orders the creation of elite airborne units. Simultaneously, the Special Operations Executive (SOE) is established with the objective to “set Europe ablaze.” After intensive training, these units will conduct audacious operations of all kinds, striking like lightning bolts before withdrawing into shadows. Their numerous successes, although often unknown, weighed heavily in the outcome of the conflict.

Rules and Setup:
V-Commandos is a great cooperative game that supports between 1-4 players who are working against the game’s enemy forces. Each player will be choosing their starting commando, each one with a unique ability, and form the squad that will be sent on the mission.

V-Commandos comes with two booklets to help guide you through the game. Not only does it come with two booklets, but the game comes in both English and French, with both book and all the cards provided in both languages. The first guide covers all the rules and options available in the game, going into detail using multiple examples and images to help you understand the flow of the turn and game. The second guide contains a few training missions that will walk you through the basics of the game. 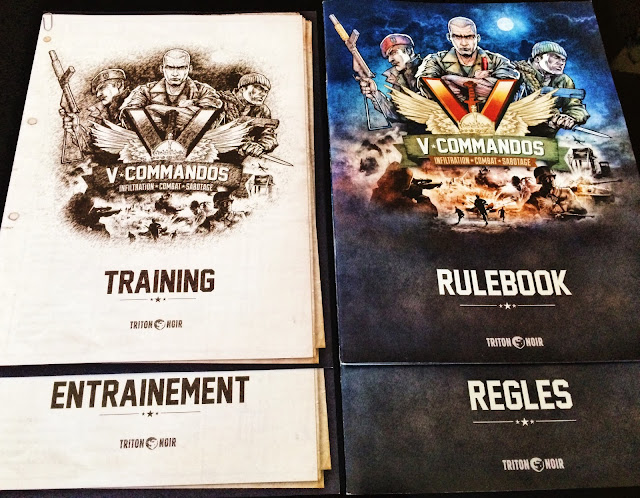 The team at Triton Noir actually took a little bit of a different approach in creating the rule book. Instead of going through how to set up the game and right into what turns look like, they start with taking the time to explain how the main mechanism works in the game, which is how movement and stealth work. Using examples from the game, before you even work on the setup, you will know how it will all come together as you setup the missions.

With V-Commandos, the setup for each mission is outlined on the scenario cards that are included with the game. Within each scenario, it will show you a layout that consists of tokens that need to be used and areas where you can use any of the tiles/scenery to fill it. For example, the initial training setup consists of a total of 7 different tiles that will be used. It also has chits and layouts in it. The tiles all come in 3 different sizes (square, rectangle, large square), and are clearly marked with indicators so you know which to use, and what the facing should be. 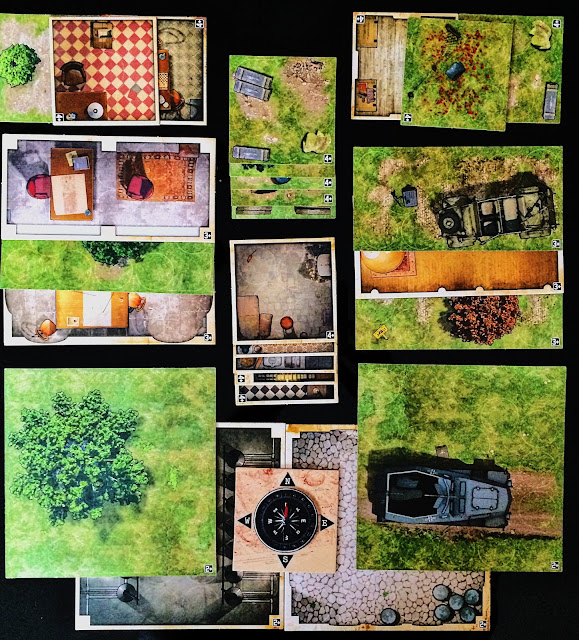 Play is fairly straight-forward, with a total of 4 phases in each round. Each round starts with the Event Phase, where you will draw an event card for every terrain tile that is in play. What is a terrain tile? Glad you asked! A terrain tile is a tile that has an objective on it, related to the mission you are on. For, you see, when you pick the scenario card, you will be given multiple objectives to complete on the missions, and what the win condition is for the game. Not only will you have different objectives, but multiple spawn points for both you and your teammates, as well as for the game. Played a mission and failed it? Maybe try spawning in a different area and using a different character. Or split up the team and try it using multiple breach points to get to the objectives.

The event cards allow, well, events to happen changing the game state. The game comes with 37 different event cards, and you will be using multiple on each round. Once you resolve the event cards, we move to your turn (known as the Commando turn). 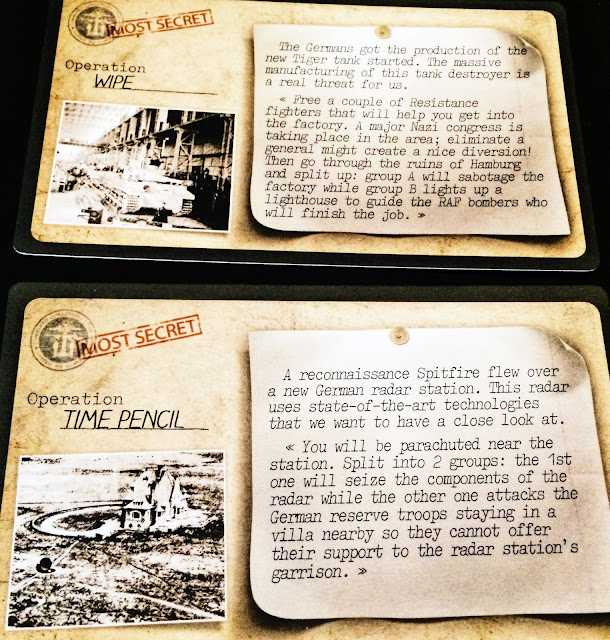 On the Commando turn, the first thing you’ll decide is the order that your commandos will play. As this is a cooperative game, you will want to talk to your teammate(s), and see what the order of play is. You will each have up to 3 actions that you can take, and each action has a cost associated with it. Need to pick or drop something? That costs 0 actions. Need to go through a doorway? That’s 1 action. Move up to a larger tile? That’s 2 actions. Once that player is done, the next commando plays their actions, and play continues until all commandos have taken their turn. 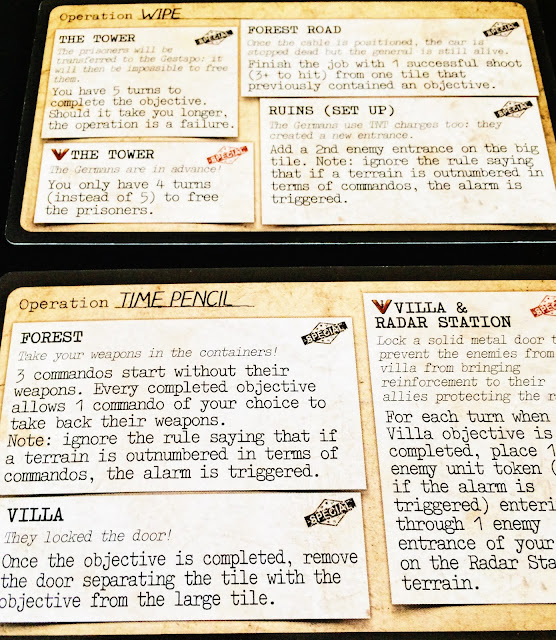 Once we’re done with the Commando phase, it’s time for the Enemy phase, where they have up to 3 different actions that they’ll take. On this phase, there is the Reinforcement step (spawning additional enemies), Movement step (if one or more of the commandos is visible, move towards them, otherwise walk to the adjacent tile), and finally the Shooting step (this will only happen if the enemy is on the same tile as a visible commando).

The final phase is the End of Turn phase, where game state is checked. If the objective of the missions has been met, and at least 1 commando has escaped, then you have won!

Theme and Mechanics:
With V-Commandos, the marriage of the game mechanics, and the theme of World War II have combined to form a fantastic union that really shines. I’ll talk about the artwork later on in the review, but thematically it all works and fits.

Mechanically, the game is solid, using tried and true game mechanics in a logical manner to bring the game together. Using a simple point system to determine which actions each player uses on their turn, and a solid AI playing the enemy, the game flows smoothly and does not take a lot of time to learn and move through.

Game Play:
V-Commandos is based on a solid core, and offers very good replayability in the core box. The game is a mid-weight game, offering challenging missions in the core box. With the inclusion of the training book, which includes 3 different scenarios to learn with, after playing through these, you’ll have a great understanding of the game and how the gameplay is. 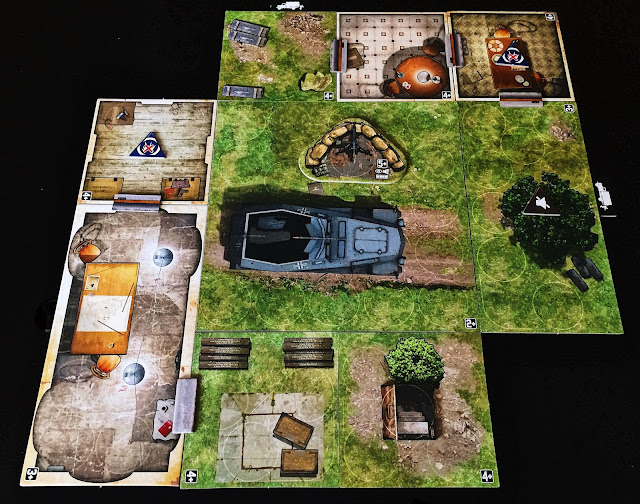 Triton Noir has also published 2 expansions (not reviewed at this time) that offers more tiles, missions, and specialists to the game, bringing larger variety into this world.

Artwork and Components:
The artwork for V-Commands is fitting for a WWII game. You will see lots of brown, green, and tan colors in the game, and while that sounds as a negative, it really works and fits in the game for that era. The artists have done a great job on the tiles and cards to match the theme of the game.

The Good:
Solid game play that is very easy to learn. The inclusion of a book that has training missions allowing you to learn the game, starting with the basics and moving to the more difficult missions is a fantastic aide that helps people learn the game. Supporting solo play by playing multiple characters is a logical part of the game, and doesn’t change the way the AI works.

The Bad:
V-Commando’s is not readily available at either FLGS’s (Friendly Local Game Stores) or some of the major online board game retailers, as it is not available from the major distributors, but is available direct from Triton Noir.

Final Thoughts:
V-Commandos is an incredibly solid, turn-based experience full of difficult decisions, strategic planning, and artwork that drips WWII. I’ve put in just over 10 gamep lays of V-Commandos with various play groups, and we’ve all come away falling in love with the game. With built-in support for up to 4 players (solo play does require you to play more than one commando), the game offers lots of replayability and hits that strategic itch more than once without you having to get into a large game. The sweet spot seems to be at 3 players, where game play really flows smoothly. If you want to bring in the young kinders to try the game, age 12+ does work, as the more complex missions can take more time to complete. 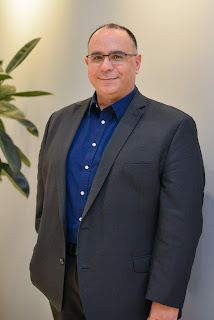