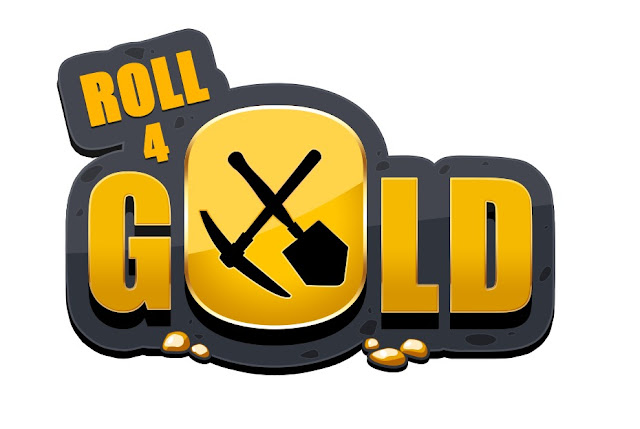 Ready to strike it rich and stake your claim? Can you be the first to become an Expert Prospector? Maybe you are ready to Roll 4 Gold. Pull up a chair and let’s see who’ll be the first to hit the mother lode. 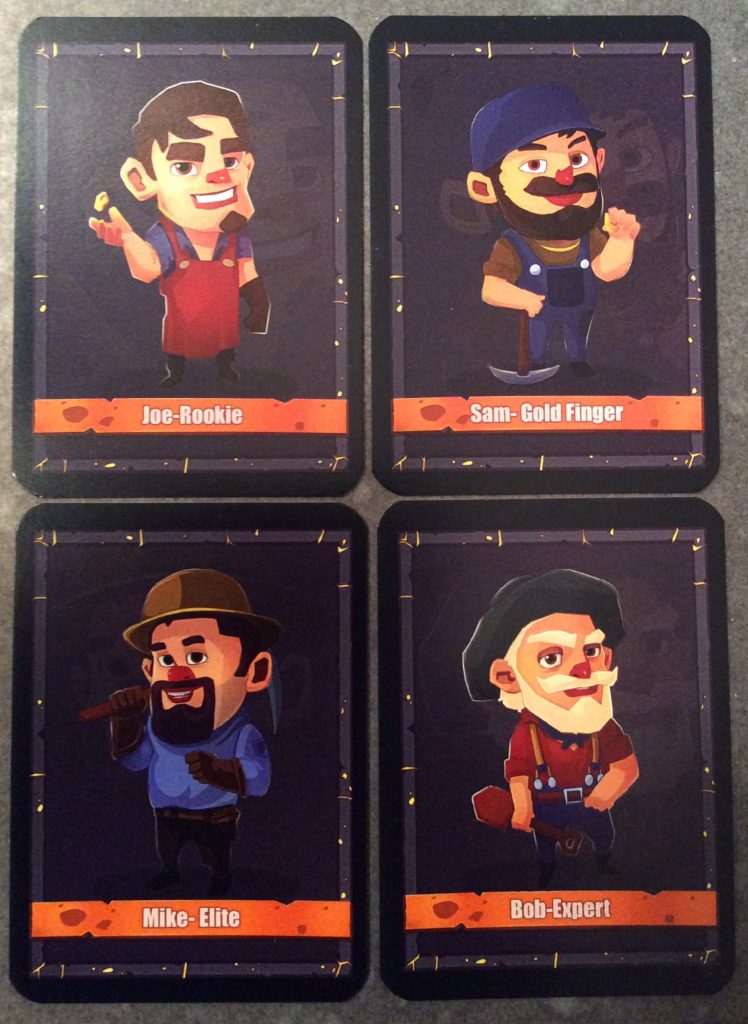 Roll 4 Gold takes a little bit of Poker and slams it into Go Fish (kinda) and adds dice so that you have a little luck thrown in. Roll 4 Gold is a reimplementation of Roll Out, the designer’s first game. But where Roll Out was much more of a Poker style game, this one is much less so and seems to be more accessible. Let’s see how it looks:

So how do you play?


Your goal in Roll 4 Gold is to get rid of the 3 cards in your hand each round. You do this by matching your card to the value of the dice rolled. Roll a 7 and have one in your hand? Great, discard it. You’re now one step closer to winning the hand. Don’t have a 7? You could discard a Wild Card. Don’t have either? Well now each other player can discard their 7’s. 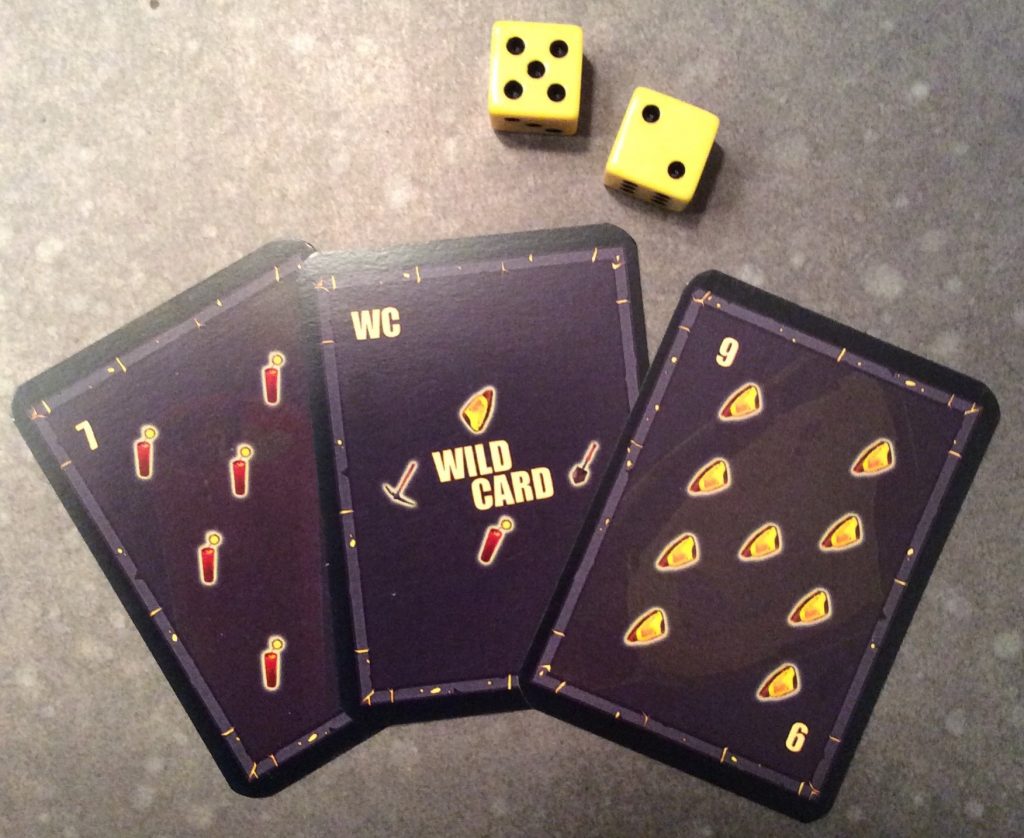 Once everyone has had a chance to roll the dice, the round ends. Everyone must now decide if they want to keep going trying to win the hand. If they do want to stay in, they need to ante up again by putting another gold nugget in the pot. You can also fold if you think there is no way for you to win the hand. There are wild cards which are special cards that allow you to discard them on your turn and keep luck from being the only winner. The game is played over a series of hands which also allow you to rally against bad luck.

There are also two rolls which will immediately change the round. If anyone rolls a 2 (snake eyes) while rolling two dice, they are automatically out of that round.

But, if they roll a 12, they automatically win the round. Rolling only one die is definitely safer because of this, but you can’t get rid of the higher value cards without rolling two dice.

You play until one player has 65 gold nuggets or if you want a much quicker game, you play 5 rounds and the player with the most gold wins.

So, what do we think?


First, this is not a game for the serious gamer. Fans of Euros or in depth strategic games will find this wanting, but there is definitely a place for this one among fillers and light games.

At its heart this is a very simple game. Roll the die or dice then discard a card of that value or a wild card. If you don’t /can’t discard a matching card, then the other players have the opportunity to do so. Run out of cards first and win the hand (and all the gold). 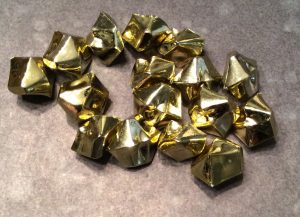 The decisions come in when you have to choose to roll one die or two, and to know when to “fold” and when to keep “digging” and stay in the game. They are simple decisions for sure, but knowing when to give up on a hand is a neat skill to develop.

The theme is rather loosely tied in, but that’s ok. We made it a little bit more theme-y by using gold from our Karuba game instead of the gold tokens.The 5 yr old really liked this since they were actually gold nuggets that she could play with as we went along.

The artwork is cartoony and campy which fits in nicely. The components are basically a deck of cards (4 suits numbered 1 to 11), a bunch of gold tokens and 2 Dice. The cards do have a mining theme with pickaxes, gold and dynamite, so that’s neat too. 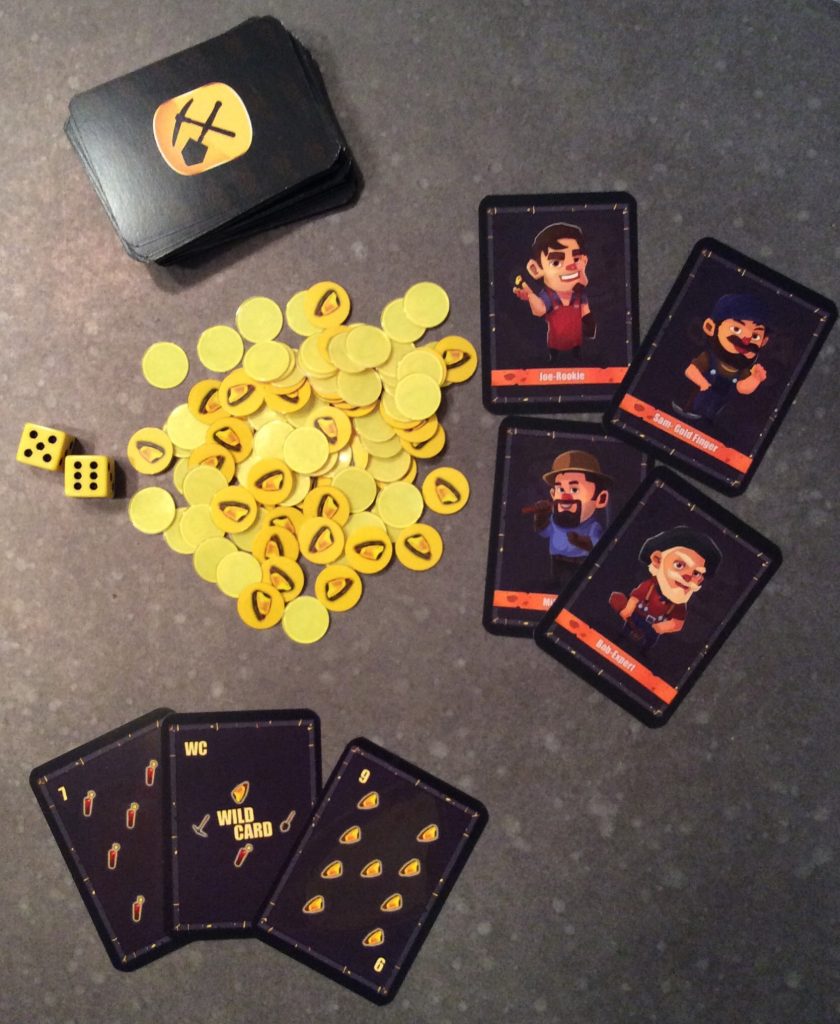 We definitely went with the shorter game play. Playing to a certain total felt too long and even with just 5 or 10 rounds of play, you could sometimes already see someone gaining a huge lead and others having no real chance of winning, so no real reason to keep at it. I was also surprised at the number of times that rolling a 2 (snake eyes) or a 12 (box cars) led to the end of the hand, it really occcured quite frequently.

I think that it works really well as a game to teach kids some simple decision making and weighing their options. I was worried at first that it might be too much like poker for me to be comfortable teaching it to the younger ones, but without the betting system, it worked out just fine. The only time they risk spending their gold is when they decide to stay in or not, which actually taught some risk/reward thinking as well.

This isn’t a game that is going to take all night to play, nor would you probably want to, but if you want a quick filler or a game to introduce new or young gamers, this one definitely will do you right. It’s definitely quick and simple enough that it can easily become a part of family game night. So grab those dice and see just how much gold you can collect prospector.