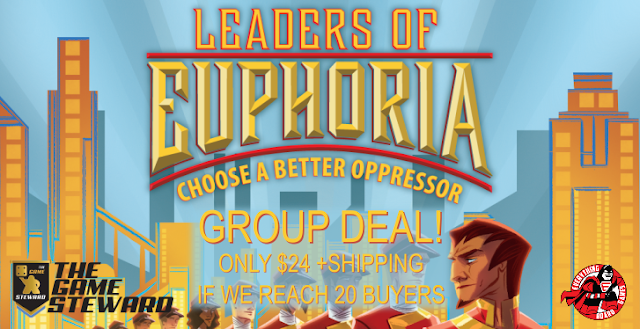 We are excited to be teaming up with The Game Steward to bring you the Leaders of Euphoria: Choose a Better Oppressor Deluxe Edition Group Deal. If we can get 20 people to sign up for this deal by September 29, 2017 we can offer it to you for only $24.00 plus shipping (MSRP $50). This deal is open to US residents only. 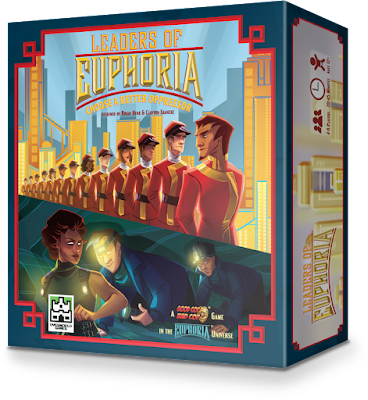 About Leaders of Euphoria: Choose a Better Oppressor:
As the city of Euphoria was being established, the struggle for political dominance raged on between the Euphorians and Subterrans. The Icarites had not yet descended upon the city and the Wastelanders were still deciding whether they wanted any part of it.

Since it has become clear that the two factions cannot share control, it is time for you to pick a side. Choose your faction, find your allies, banish those who oppose you, and ensure your place at the top of the dystopian society to follow. Now it’s your change to Choose a Better Oppressor!

Leaders of Euphoria: Choose a Better Oppressor is a social deduction game in the style of Good Cop Bad Cop, but set in the world of Euphoria. It takes place earlier in the timeline than Euphoria, when the city was young and foolish. Players will have 3 cards in front of them that determine whether they are on the Euphorian or Subterran team that will be investigated throughout the game to figure out who’s on their team and who’s not.

Instead of the equipment cards from Good Cop Bad Cop, players now use and give artifacts from the Old World in a new Artifact Phase or as a standard action. In Leaders of Euphoria, you can use your turn to Hide one of your Recruit cards, which is important because, unlike Good Cop Bad Cop, you may not use important actions without having a hidden recruit to expose. Also, there is no player elimination like there was in GCBC, as players who are banished from the city become Wastelanders and have a new victory condition.

What they are saying:
“Leaders of Euphoria is one of the best large group deduction games I think I have ever played.“
– Forrest Bower, Bower’s Game Corner

“Although the rules are simple … there is just so much strategy in this game.“
– Tom Wright, Forensic Gameology

Thank you Game Steward for bringing us this awesome deal!!!