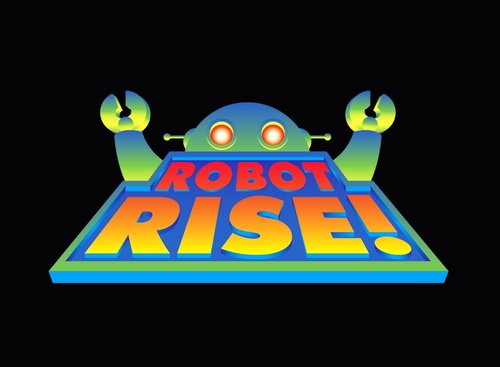 Robot Rise is on KICKSTARTER between now and August 31, 2017.

Attention Mad Scientists, the Ministry of Discord has an opening! You and up to 5 other are the finalists for the new position. All you have to do is eliminate the competition, literally. And the way you are going to do this is by using Giant Robots. Settle in, this is going to be quick, but it’s not going to be pretty.

Robot Rise! Is a card game for 2-6 Mad Scientists that is very quick, and easy to pick up. The box says 15-30 minutes and that is extremely accurate. No game we played took more than about 25.

Let’s take a look and see how it plays:

How to play:
Setup is very simple. Every player gets 3 Secret Lair cards (destroyed side down).

If all 3 of your Lairs are destroyed you lose. Last one standing wins. Shuffle the deck and deal 5 cards to everyone (7 with 2 players). Now you’re ready to play.

So what are the cards and how do they work? There are 5 types of cards: Lethal Attacks, Nuisance Attacks, Utility, Defense, Event Cards, and Giant Robot Cards.

Lethal Attacks are just that. When you play a Lethal Attack card, you choose an opponent to play it against and they must immediately defend against it or one of their Lairs is destroyed.

Nuisance Attacks are non-lethal attacks. They cause you trouble but no damage. Nuisance Attacks may cause your opponents to discard cards, allow you to steal cards from other players, make someone lose a turn, or prevent someone from attacking you on their next turn.

Utility cards are helpful to you instead of hurting others. They allow you to draw cards, select a card from the discard pile or protect yourself from attacks. 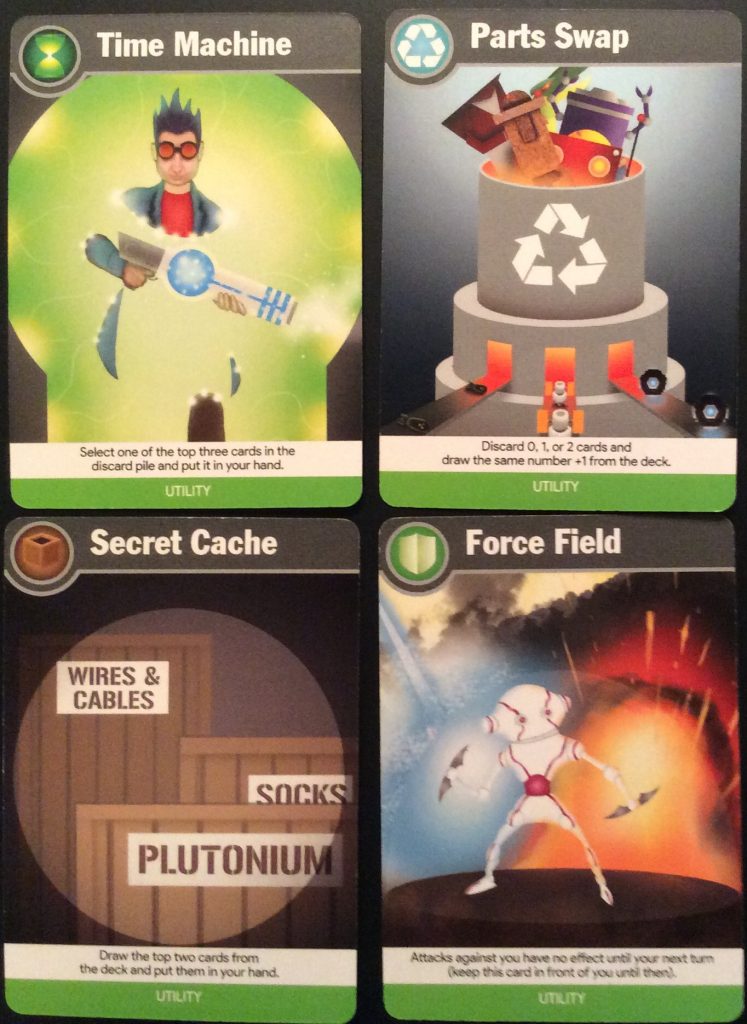 Defense cards basically cancel out a Lethal Attack card or a Nuisance Attack. After you successfully Defend against an attack, you immediately draw a new card from the deck to replace it.

Event cards are cards that take immediate effect when drawn. Two of the event cards force the player who drew them to immediately defend against them or lose a Lair. One of the Event cards (Global Annihilation) forces all players to defend or lose a Lair.

Giant Robot Cards are at the heart of the game. After all Robots are in the name. Giant Robot cards come in 3 types: Robot Heads, Robot Bodies, and Robot Legs. In order to use a Giant Robot, you must have one of each card (Head, Body, Legs) in your hand and play them all at the same time. 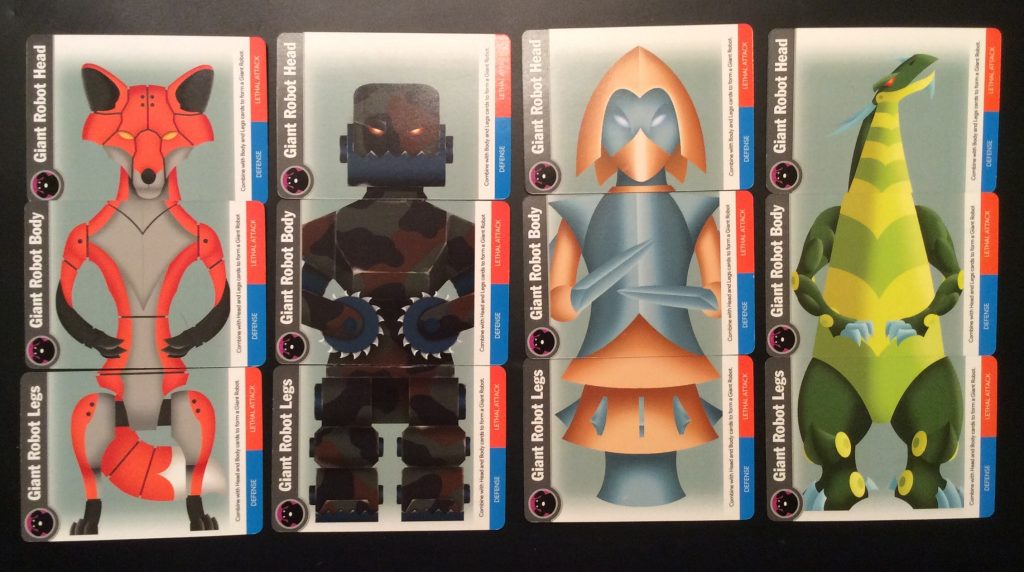 There are even a couple of Flexible Bot Modules that can be used as any one of the components of your Robot. 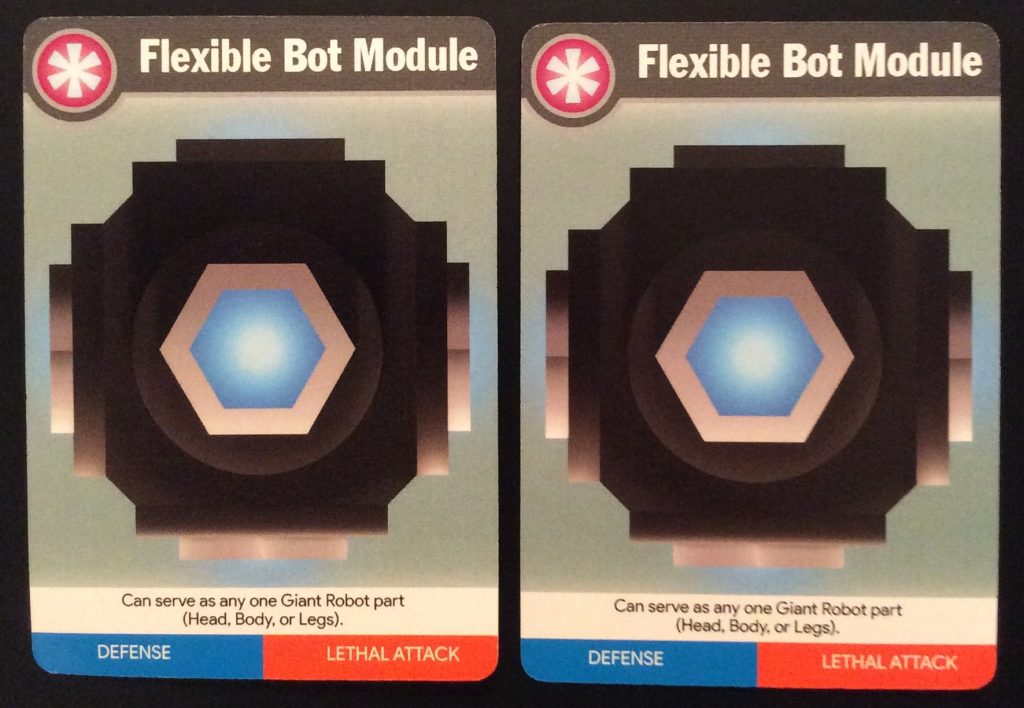 Playing a Giant Robot can count as either a Lethal Attack or be played in Defense. Any combination of Head, Body and Legs can be used, they do not have to match. If they do match, however, you get a bonus. If you play a Matching Giant Robot as a Lethal Attack, you get to attack two players instead of one, forcing both players to defend.

If you are only missing one component from a Robot, you can ask for help, forming a Temporary Alliance. You simply say, “I need some Robot Legs!” or “Can anyone give me a Robot Body?” If someone agrees to supply you with what you need, you take their card and form a Giant Robot, they draw a new card. You then get to attack anyone with the Robot except the player you took the card from. Your Temporary Alliance then ends, and once again no one is safe.

Special Cards: The Nuke card can be used as either a Lethal Attack or a Defense card. The EMP can only be used against Nukes and Giant Robots. The Malware card only allows you to Defend against a Giant Robot, but when you do, it sends the Robot back to attack its owner, who must then Defend.
So, on your turn you choose whether to attack, draw or steal new cards, or set up a force field, then you draw a card. Your opponents do the same, Attacking and Defending when possible, losing a Lair when you can’t Defend. Last one with a Lair standing wins.

Thoughts:
So, what do I think? Well, its got robots, so that was what immediately got my attention. I mean, who doesn’t want to duel someone else with Giant combining Robots?

The game itself is incredibly easy to explain and very quick to learn. Every time I’ve taught it to people, we were playing within a couple of minutes. The text on the cards is very helpful and even better than that, the cards are color coded by type. Lethal Attacks are Orange, Defense cards are Blue, Nuisance Attacks are Purple, Utility are Green and Event cards are Red. Some of the cards have both Orange and Blue, which means you can use them as either Attack or Defense. The color coding is what makes it super easy to learn.

The gameplay is very fast. There is often almost no downtime between players turns. Even if there are 6 people playing, it goes really quickly. Since you are often having to Defend when it is not your turn, you are always paying attention. The game immediately identifies as a Take That game with all the dread and excitement that goes with that, but the Robots add an extra layer of fun. When I was playing, I was always trying to make sure that I had a Defense card in my hand. I used Utility cards to draw new cards, or set up a Force Field. I used Nuisance Attacks to steal cards and cause other players to lose cards. But it didn’t always help. The game makes you use cards if you have them. There is no way to save a Giant Robot for Defense if you don’t have any other usable cards. There is no way to save a Nuke for Defense if you don’t have any other usable cards. This means that no one just gets to sit around and save up Defense cards to outlast everyone else. If the only card you have forces you to Attack, you HAVE to Attack. It really keeps the game moving at a quick pace.

The only thing that slightly disappointed me was the Robots. Don’t get me wrong, the Robots themselves are great. The Illustrations are fantastic and really fun, but I kinda wanted them to do more. Maybe each Robot should have its own special power that they got to use if you used all Matching pieces…I don’t know, just a little disappointing.

Overall, though, the game is a lot of fun. It’s a nice little filler that has funky Robots, and definitely doesn’t take itself too seriously. It’s not meant to be a game for hardcore gamers. It’s meant to be fast and fun and in that it succeeds.

It has almost no learning curve, and plays really quickly. There’s lots of opportunities for revenge and smiting your opponents. Just when you think, you’ve collected just enough cards to take an enemy out on your next turn, someone attacks you and you have to use your brand new Robot to defend.
There is enough strategy to keep you hoping, but you never really have time to build up a killer hand. If you’re really lucky you might get a matching Robot and attack 2 opponents at once. More often than not, you will be fighting for your life and barely pull out a win with one Lair left.

Robot Rise! is well balanced, fast paced and fun. And I will always be up for a game, although I almost never win. Ninja Approved.

Happy Harpy Games sent Robot Rise! to us as part of the Everything Board Games Network in exchange for an honest review, which is exactly what we provided.

Robot Rise is on KICKSTARTER between now and August 31, 2017.