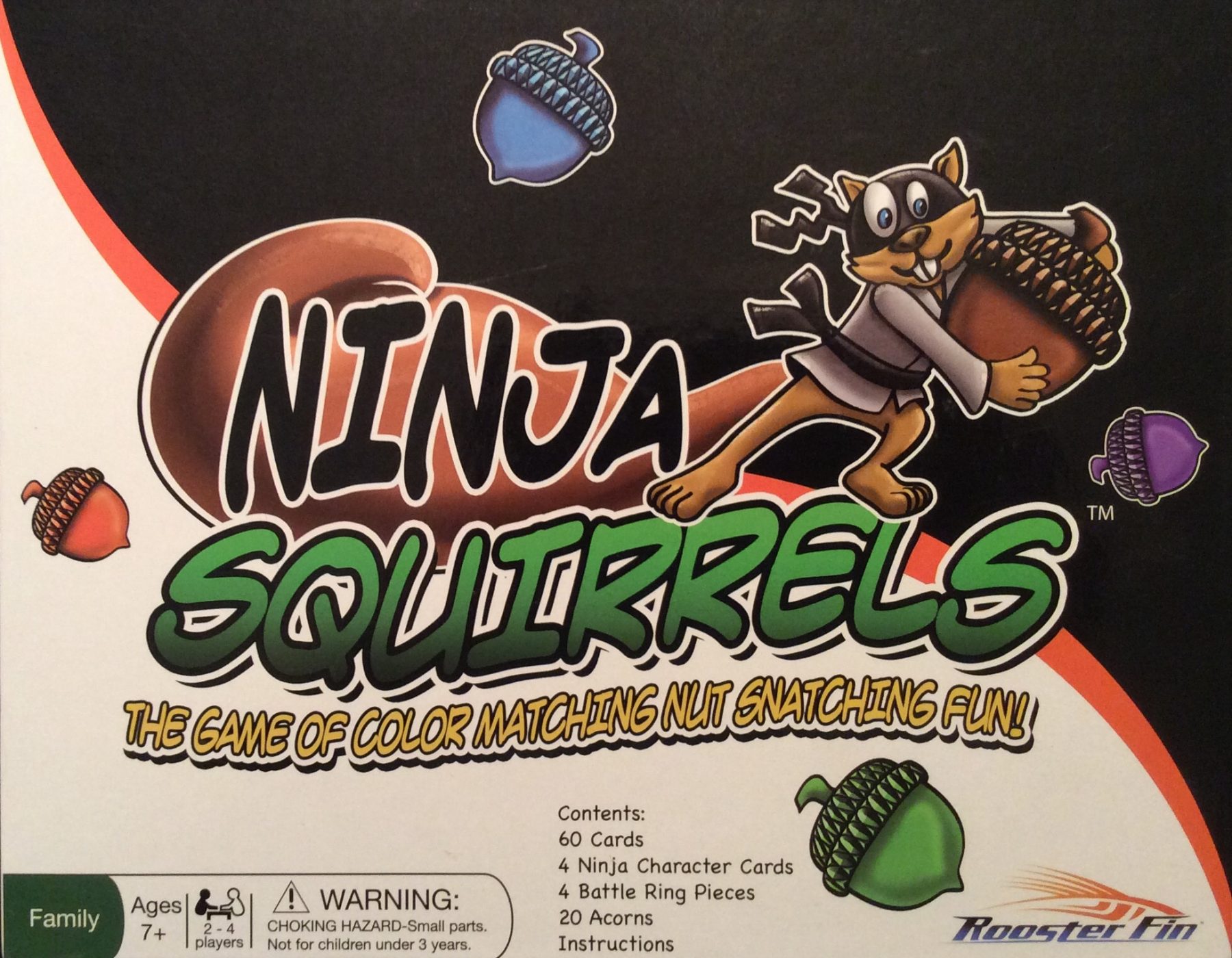 Ninja Squirrels is a fast paced game designed for Children and Adults that has everyone matching colors and snatching nuts as fast as they can. If you’ve ever played Slap Jack as a kid, you can play this game.

Basically Ninja Squirrels is a really simple game. In fact, it may be one of the simplest games I’ve ever played. There are four squirrels, each of a different color. Each one wants to collect Acorns of their color. Your job is to help them.

On your turn you flip over a card from your deck (divided equally among all the players). Everyone keeps flipping cards from their deck as fast as they can until a card comes up with a Squirrel whose outfit matches the color of the Acorn they’re holding. Then everyone tries to be the first one to slap that color Acorn in the Battle Ring and claim that Acorn.

If the picture shows a Green squirrel with a Green acorn, 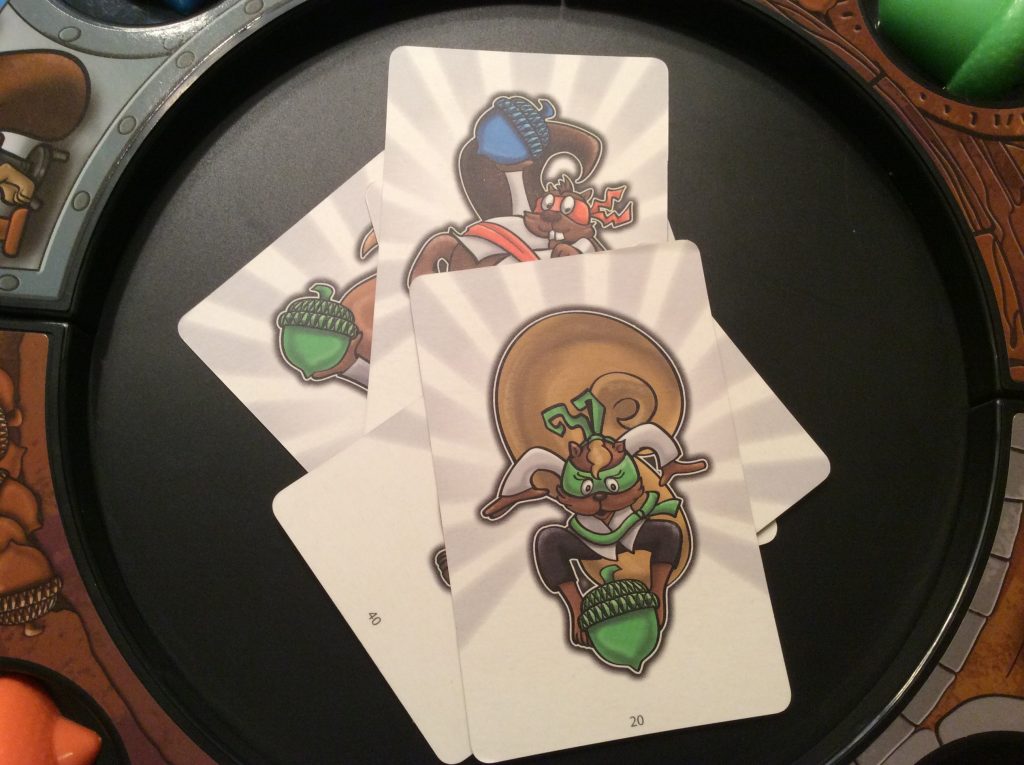 you slap your hand as quickly as possible on the Green nut in the Battle Ring (first Hand there gets the Acorn). 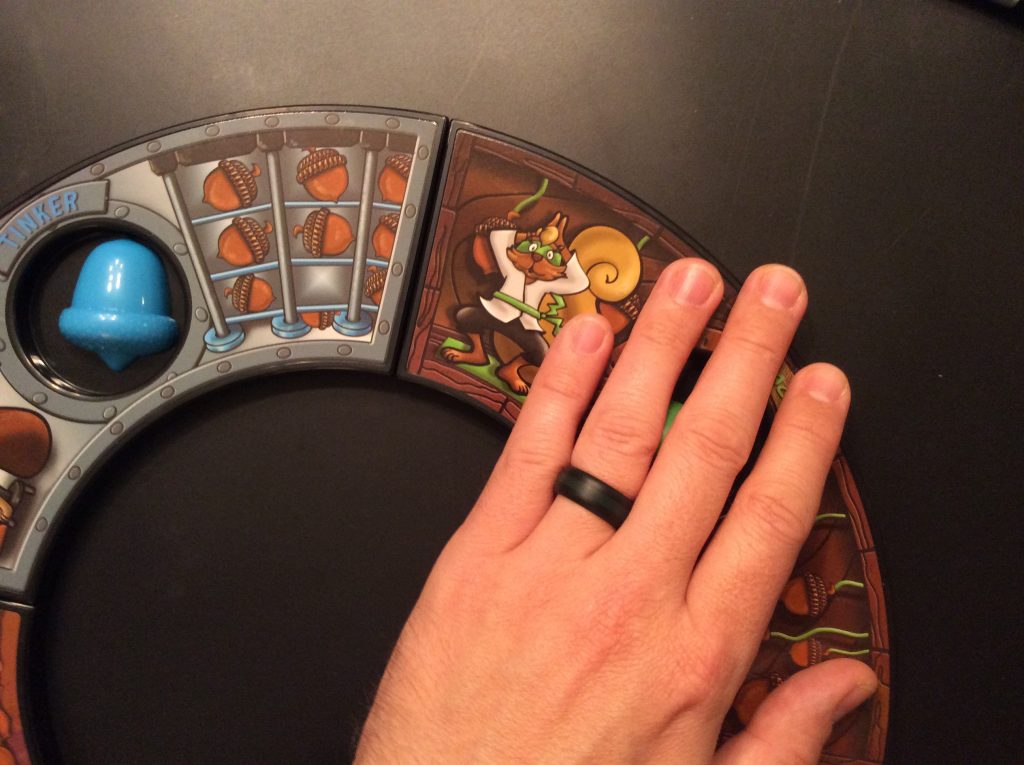 No Green Acorn there? …well, too bad, no one gets an Acorn.

Two or Three or even Four Green Acorn there?…more than one player claims an Acorn.
Once all the Green Acorns have been claimed from the ring that round, you draw Acorns randomly from the box to replenish the Battle Ring (there are four spaces for Acorns in the Ring). Then the card flipping and nut snatching continues.

The game ends when either all cards have been flipped or all the Acorns have been collected. Whoever has the most collected Acorns wins. 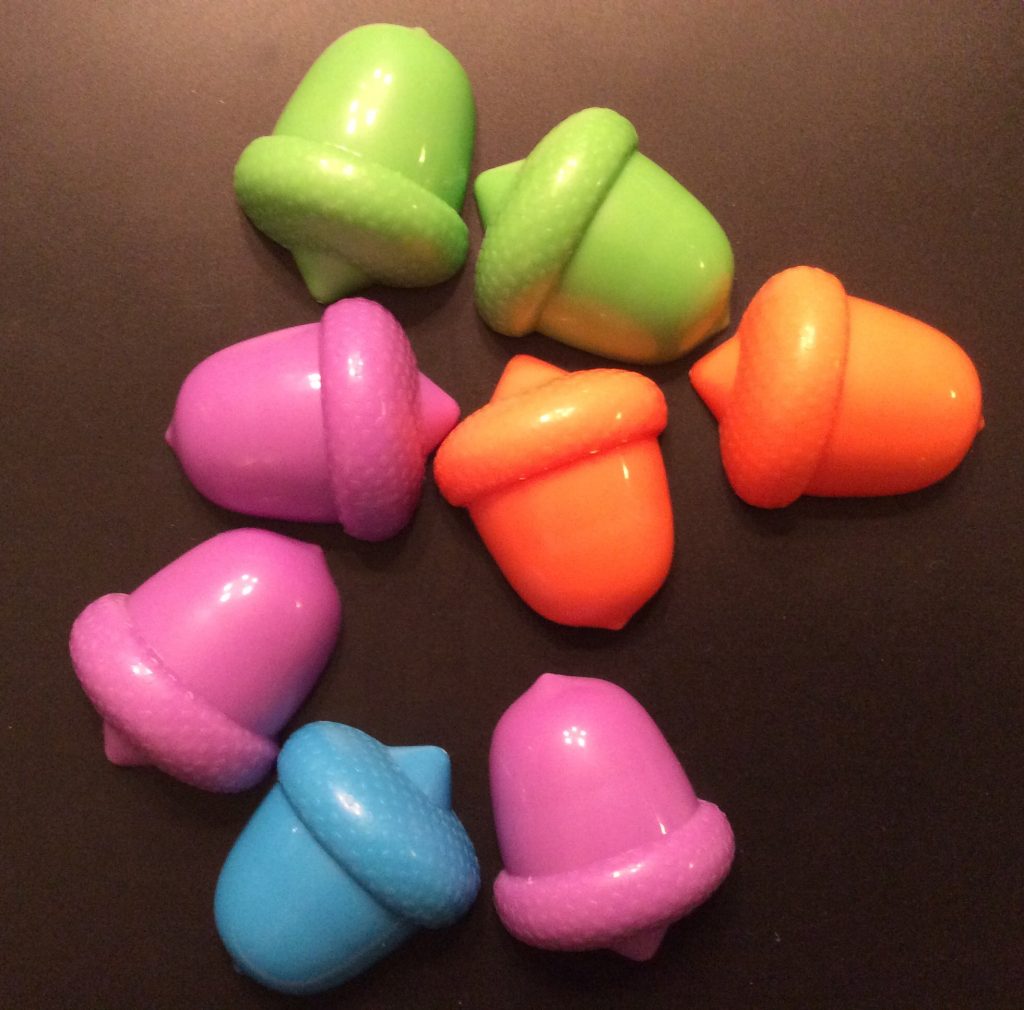 That’s it. It is very simple. But simple, in this case, is just right. The game takes maybe a minute to set up, or really just long enough to shuffle and deal out all of the cards, and you can pretty much explain the rules in less time than that.

The component quality is great. The Battle Ring is very durable and the pieces lock into each other so that it’s not constantly falling apart in the middle of slapping your hands down quickly. 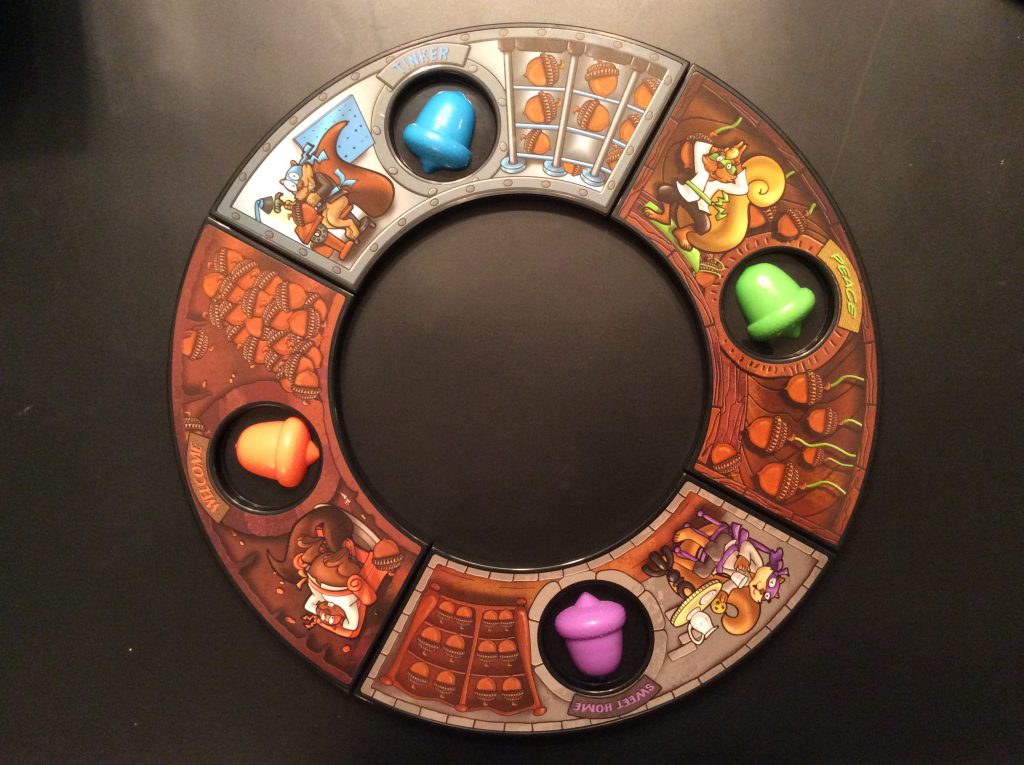 The cards are extra thick, which makes them a little harder to shuffle, but guarantees that they should last a long time. The artwork is cartoony and a perfect fit for the game. Ninja Squirrels comes with 4 Character cards, which are basically just for fun.

They have no bearing on the game, but kids seem to like picking one to play.

So, how is the gameplay? It’s really pretty fun. Now, you should know that it is incredibly light. Even for a family game, this one is light. But, like I said, there is nothing wrong with that. The game has absolutely zero strategy. It’s basically Slap Jack plus color recognition. All you do is flip over a card and try to slap the Acorn first if the colors match. You aren’t allowed to look at the card, so like I said – zero strategy. There is a penalty for trying to claim an Acorn if the colors don’t match or if you slap the wrong one, but no one really cares too much about that. It’s all for fun. There is no great sense of accomplishment when you win or sadness when you lose. Usually it’s just “Wanna play again?”

So…Who’s it for, really? The box says it is for ages 7+, but my 5yr old niece had no problem whatsoever catching on and playing, and she had a blast. Even when she didn’t collect the Acorns, she still had fun telling us that yes in fact those colors matched or no, they didn’t. And the adults had fun too, although I’m pretty sure we had more fun playing with the kids. My wife and I played without her, and it was a nice palate cleanser, but not something we are going to play all the time, not without the kids anyway.

And I think that that is where this game lives. It’s fun and silly. It certainly doesn’t take itself too seriously. It’s something we will pull out in between other games or at the end of the night. After all, it really only takes about 10 minutes anyway. When we are with some kids we’ll play it, but it won’t be a every game night kinda game. If you’re looking for an in depth brain burner, this isn’t it. But…if you just want to have some quick silly fun, check out Ninja Squirrels. We did, and it was quite fun. Ninja approved.

Ninja Squirrels was sent to us by Rooster Fin games as part of the Everything Board Games Network in exchange for an honest review, which is what we provided.