Wow….  All I can say is wow.  Mr. Lacerda has come through again!

In 1755 Lisbon, Portugal (Lisboa in Portuguese) suffered a major earthquake followed by a tsunami and major fires. This devastating series of events eventually razed the existing city. Although this event was a major catastrophe, it gave the locals an opportunity to rebuild a far more modern city. My brother-in-law, who lived in the city for two years, says that the locals still discuss this major event more than 250 years later. It had a major impact on what Lisbon has become.

This game wonderfully re-creates that event and the rebuilding process in a game where each player seeks to re-build the city and to gain favor with those in charge. It is deep, strategic, complexly tied together, balanced, and intense. The rule book is twenty four pages long, and the player aid books that each player gets are eight pages alone. Explaining the rules or mechanics of this game would be extensive and there just isn’t enough blog room to do it, but I will say that once you catch on, while the strategy remains deep, the game play isn’t as complicated as it may seem.

The gist of the game is that there are a lot of things happening during the rebuilding process. You must gain favor with the King, the Prime Minister, and the Master Builder to get permissions, land, and components to rebuild the city. You can use church influence to help you through the process. You can send ships to sea to collect building components and more money for the construction. The financial market and availability of government leaders are constantly changing and affecting the overall ability of the players to build.

When players go to build, they must deal with locations that have been affected by the earthquake (tan cubes), flooding (blue cubes), and fire (red cubes). The amount of damage to an area produced by the different disasters affects the cost to rebuild that property. Players can also convince the government to fund city buildings which enhance the value of private structures that players build. Also, rebuilding different city components can earn you additional victory points (known as “wigs”) if there is a decree to improve those areas.

During each round, each player gets a chance to play (with some actions giving additional players opportunities for additional actions), and after a certain end condition is met, the first era is over. Then, cards representing advancements in shipping and more expensive advantages are added to the game and another era is played until another end condition. When this happens, the game is over and wigs are counted. He (or she) who has the most wigs is the Lisboa building master!

Setting this game up is a challenge. The game box weighs over 20 pounds, and there are pieces and cards to put everywhere. The rule book is VERY good at getting everything in the right place, there is just a lot to place.

The rule book itself is strong. There’s never a question about what should be done (which amazes me with as much as is going on). The player books, although extensive, are extremely helpful in working out what symbols mean and what a certain action will cause. Although the game is a little slow to get started, the rules and player guides helped us through the whole game without a problem.

To me, one of the very strong points of this game is the theme. The game is heavily influenced by actual events, and the characters in the game are real people that you can read more about in the rulebook and in history books. The game plays to the real challenges of building in 18th century Portugal, and every part of the game ties well to the theme.

The mechanics of the game were a little difficult to figure out in the beginning, but by the end, when we had it down, were not difficult at all. Replay is so much easier and faster, and it starts to feel not as massive and as complicated.

The game plays both two and four players well (from experience) and has a solo variation (which I have not tried). The age range is probably pretty good with a 12-year-old minimum age; there is just too much going on for anyone much younger. The play time listed is 1-2 hours. My second game (with two players) took all of the 2 hours, and I can’t imagine finishing a game in less time, unless that is where the one-player game comes in. Our first game took 6 hours to set up and play with four players. It was long but certainly didn’t feel that long (until I had to go to work the next day). 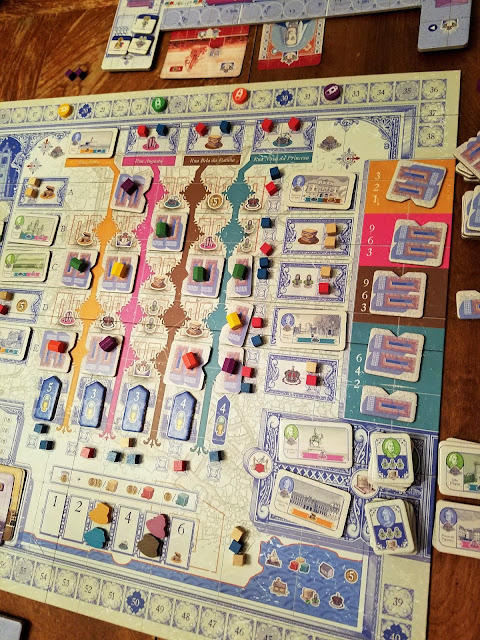 Eagle-Gryphon Games spared no effort or expense in putting this game together. The artwork is amazing and matches the theme through and through. The components are great. Pieces are thick, cards are thick, and the board is amazing. The box and inserts work well, and there’s not a negative thing to say related to the components.

The Good:
The game is just great all around. I love the art, I love the components, I love the strategy, I love the resource management, and I love the mechanics and balance. It’s a great game with a solid theme, and it has everything I love in a deeper game.

The Bad:
The hardest part was probably the time frame. It was better after getting it figured out, but I know a lot of people that couldn’t keep their interest long enough to set the game up. However, the right group will find it fun after figuring out how to play the games.

Final Thoughts:
Great components and game all around. I love Lisboa! Some who don’t like the depth might give a very low value for the game, but in my book, Lisboa is a winner.

Players Who Like:
Deep euros with lots of strategic and different ways to be successful. 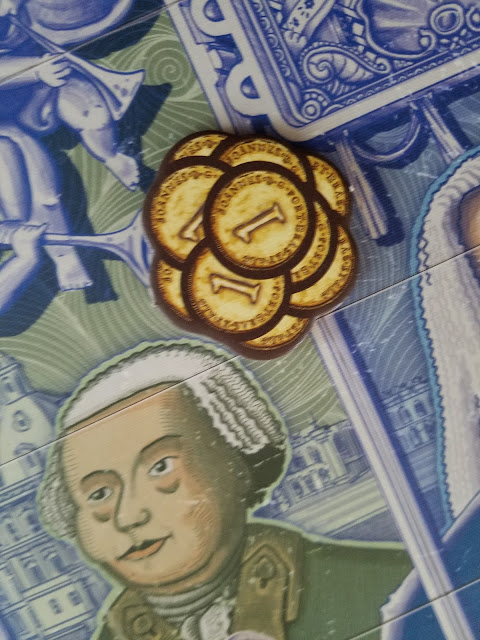 I am giving Lisboa 9.0 out of 10 super meeples.
(To match the magnitude of the earthquake that inspired this game)
Check out Lisboa on:

Get your copy of Lisboa at your FLGS or on AMAZON!