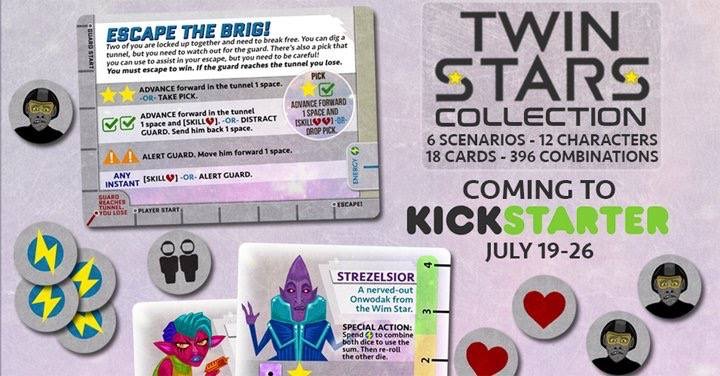 I just got through Live Tweeting a play through of Twin Stars, coming soon from Button Shy games, so I thought I should write up my thoughts. Originally this solo pocket game came as a stretch goal in a Kickstarter called Pod X (a really fun game in its own right). Now Twin Stars will be its own game collection and you can get your hands on it very soon. This was my tenth or so play though of the game, and I can tell you that I’ve lost just as many times as I’ve won. Anyway here’s what I think:

So…What is this game? Well, basically, each game is 3 cards. You supply markers and dice and then you get to rolling. The collection itself is more of a system. Each scenario card will be able to be played with every character created for the system. The scenario that I’ve had a chance to play was called Escape the Brig, but they have already announced that there will be 6 scenarios and 12 characters for a whopping 18 cards total, and 396 possible game combinations.

In Escape the Brig, you are two Prisoners working together, trying to escape. 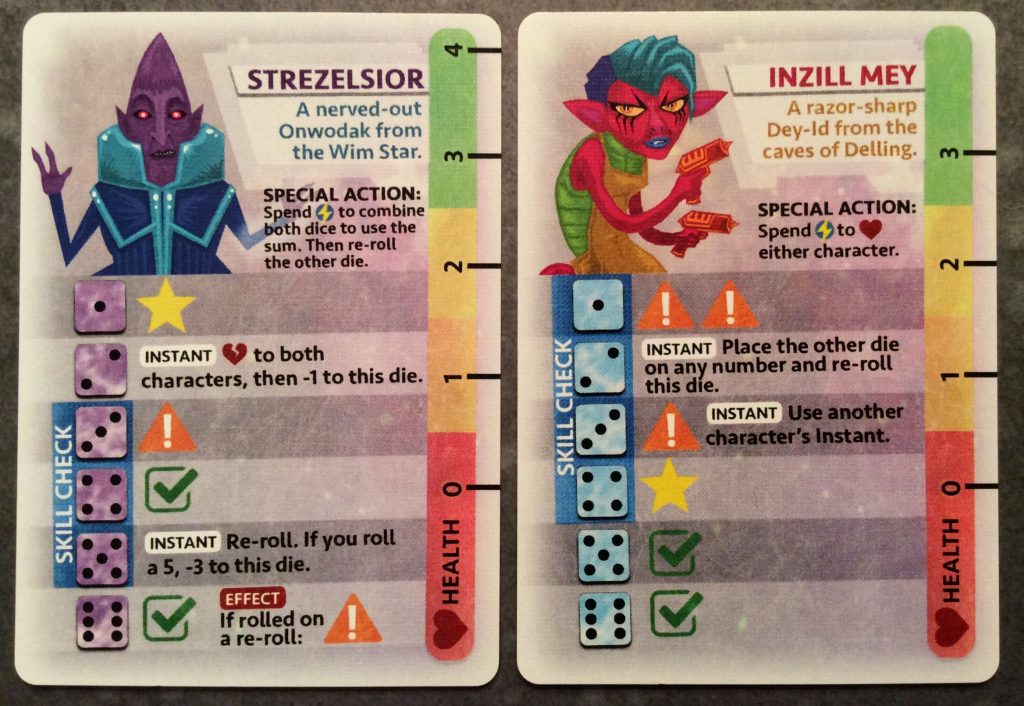 If you can make it out before the guard sees you, you win. But, both characters have to survive. You need 4 dice (d6) – 2 character dice, and 2 skill check dice. I used different colors so I wouldn’t get confused. You also need 3-5 markers to keep up with your character’s health and how much Energy you have available. 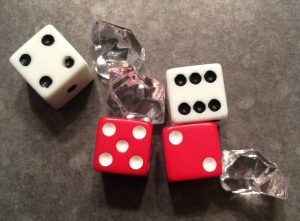 Lastly you need something to represent your Prisoner (who is trying to escape), the Guard (who is…guarding) and a Pick (which is useful). I drew stick figures on post-it notes and it worked just fine. 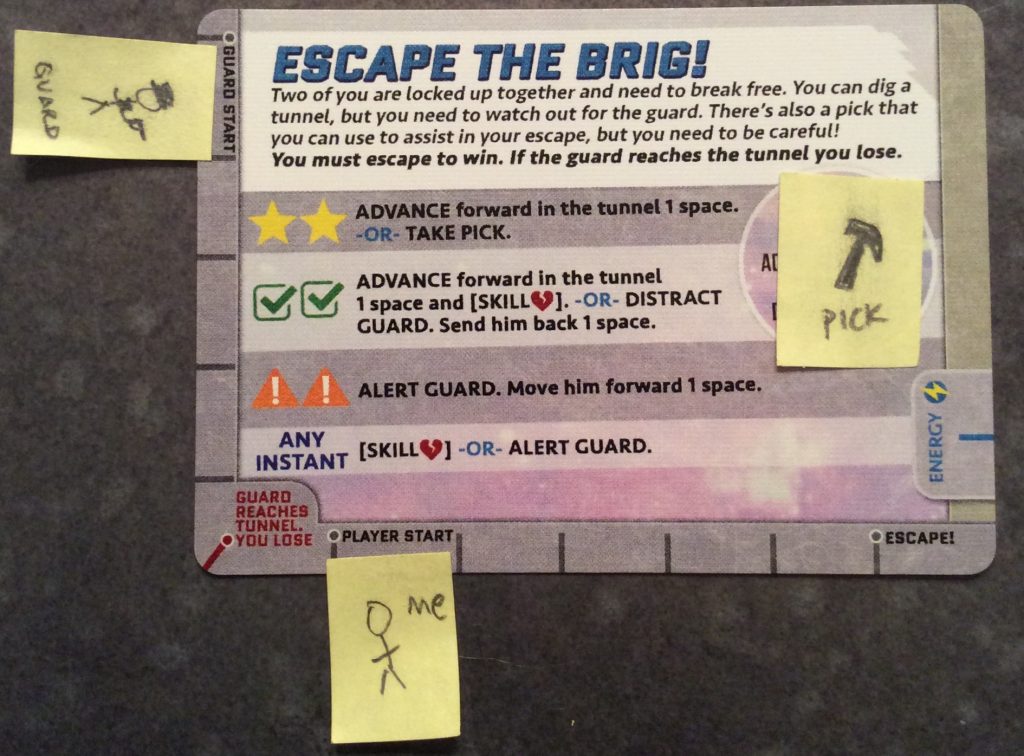 So, how does the system work? Well you are basically rolling dice trying to come up with combos. Each character card can only hold one Character die at a time. At the beginning of the game you will roll both Character dice and place them on character cards, one at a time. On one character’s card the 4 represents a Check, on another it might represent a Star.

There are also “Alerts” (what I call the ! within a triangle), and Instant actions. Depending on what you roll, you must combine these symbols to perform a combo action or keep rolling. If you do not form a combo with the symbols, you take one of the Character dice into your hand to reroll, and reduce the other die’s value by 1, thus representing a new symbol/ability now. Combine the new symbol with the next die you roll if possible. If not, keep rolling and reducing. If you ever need to reduce a 1, you instead take both dice back into your hand and perform a double Alert combo.

There are also times when you are forced to roll a skill check. You then roll those dice one at a time (one for each character). If that characters skill check value falls within the skill check range, then they pass, if not, they fail. Both characters must pass. If not, there is a consequence (often it is losing health).

Effects happen only in certain circumstances, and are not optional.

There is also a pool of Energy that the characters can use to perform their own special abilities. (How much energy you start with depends on the difficulty level of the game).

There is a considerable amount of Luck in this game, as in any game that uses dice as a major component. Often, it is not what you roll, but your choices that matter. There really are a lot of great choices to be made during this tiny game. Sure there were times that rolling a 1 was the only thing that would sink me, so of course I rolled a 1. But there were just as many times that I really had to think for a minute to determine what the best course of action was going to be.

During the last game that I played I had to choose between having to reduce a 1 (thus causing a 2 Alert combo) or reducing my 4 down into the 3,2,1 range, which was not advantageous for that Character. In Escape the Brig, you have a lot of different possibilities and choices, but I really think that this is just the tip of the Iceberg for this game system. It reminds me of a very compact Sentinels of the Multiverse. There is a system in place. Now choose your characters and choose your scenario. Now go. 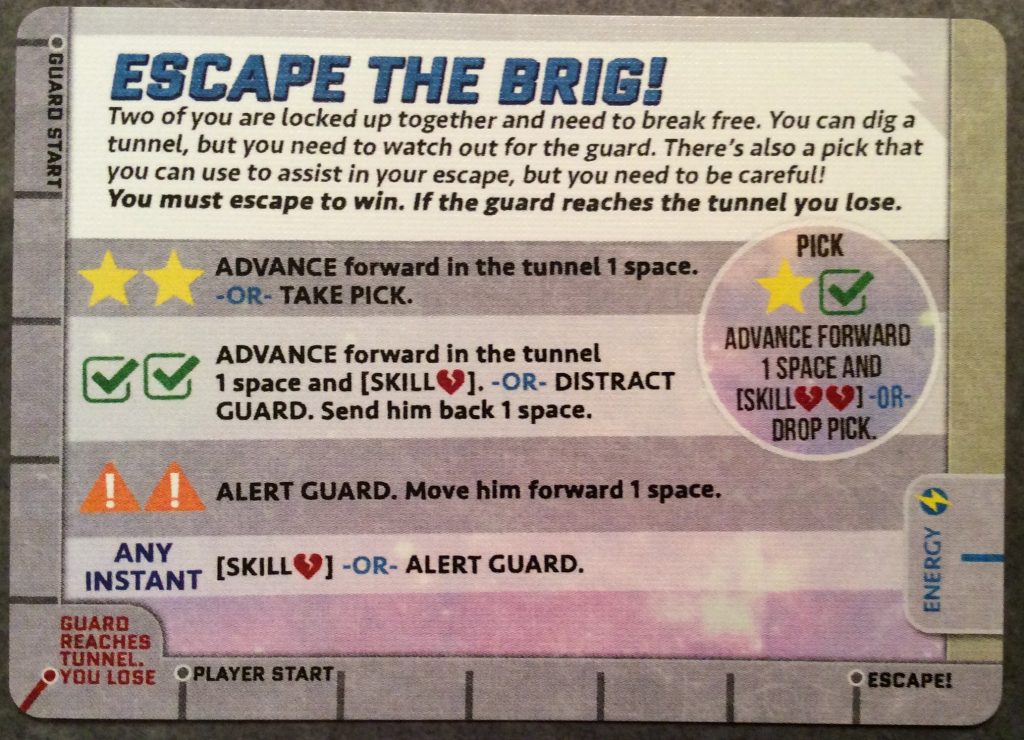 Now, I don’t see ever having 50 characters or scenarios coming out for this game. Button Shy Games is all about the compact experience. But, you could easily have 10 or 12 scenarios, with just as many characters and provide a huge variety of gaming. Maybe there can be a bunch of stretch goals.

I said before that Ive lost as many times as Ive won, and that’s absolutely true. The game is incredibly well balanced, providing that you remember to do the skill checks when called for and actually play by the rules (I may have messed up a couple of times). The game forces you to make tough choices. I did find myself avoiding the Instant abilities the majority of the time, but that was more because I thought I’d be better off with the other options, not because I was afraid of the skill check. Also, I found myself forgetting to use the Energy ability that each character has at their disposal. When I remembered it was often very helpful.

This is not a game that you’re going to be playing every week. It’s a solo game and thus will have its time and place. But, it is extremely fun and quite challenging at times. I found myself obsessed with winning at first (“I’m not going to let these 3 cards beat me.”). But once I settled down I began to appreciate it for what it is: to a well designed fun little game that i can take with me and play anywhere, and I don’t even need anyone else to join in.

Twin Stars collection will be on Kickstarter soon. The copy I reviewed was one that came with the Pod X Kickstarter that I backed, so the newest version may differ slightly. My Twitter play through thread (with bunches of photos) can be found here.