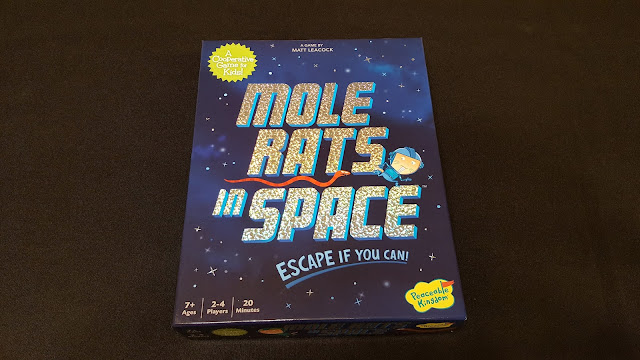 A long time ago in a space station far far away the rebel mole rat alliance was going about their own business when suddenly they were boarded by the dreaded troopers of the Imperial Snake Empire. The mole rats must now abandon their posts and get to the escape pod before they are captured or worse.

Can your team maneuver your mole rats to the escape pod and safety before the snakes get to your crew or the pod? If so you will be victories if not it will certainly spell doom for this small band of rebel rats.

Mole Rats in Space is a cooperative game designed by none other than Matt Leacock, famed creator of Pandemic. In Mole Rats players will move their mole rats around the space station avoiding snakes, collecting parts, and getting to the escape pod as quickly as they can. Players move their characters based on the card they play from their hand which also moves or activates the snakes. If the players can get all the mole rats and parts in the escape pod the players win collectively. If a player’s mole rat perishes, or a snake enters the escape pod, or the draw deck runs out the snakes are victorious and the players loose.

To set up Mole Rats the board is set in the center of the playing surface with the equipment tokens placed on their spots and one snake of each color placed on their corresponding spawning point. Each player chooses a color mole rat to be and places it along with a med kit onto the board in their starting locations. Next the cards are shuffled and each player is dealt one card face up while the other cards are placed face down next to the board to create the draw deck. Finally the additional snake tokens are placed near the board to use throughout the game.

If a player moves through a snake or ends her turn on a snake her mole rat has been bitten and must move back to her starting location and discards her med pack. The second time her mole rat is bitten the game is over.

Snakes move in a similar way to the mole rats.

2) Discard card. Once the player has moved the mole rat(s) and snake(s) she places that card in the discard pile.
3) Draw a new card. She now draws a card form the draw pile. If the draw pile runs out players can continue playing their remaining cards until they win or run out of cards. Once out of cards the players loose.

There is also a sealed “challenge” envelope included in the game which adds additional cards and a new way to loose the game. I will keep the rest secrete as to not ruin the surprise for you.

Imagine Chutes and Ladders meets Pandemic and there you’ll find Mole Rats in Space. It is a great mix of  a modern cooperative euro game and a classic kid’s game. To my knowledge this is Matt Leacock’s first foray into children’s games, although my kids play Pandemic all the time, and he has done a stellar job.

Mole Rats in Space is a great introduction to cooperative gaming mechanics for younger players. It is similar in it’s accessibility as Cauldron Quest and Race for the Treasure, also published by Peaceable Kingdom, but a little deeper and tends to create more suspense. The cooperative style of players verses the game is simple yet fun. Player’s cards act as both movement for the mole rats and the snakes which makes for some interesting decisions. Matt has also added three ways for the game to win which is very characteristic of his titles and keeps players on their toes.

The artwork for Mole Rats in Space is what you would expect for a family game aimed at younger players. It is cute and draws children’s interest and keeps them engaged throughout. The mole rat player pawns are awesome and the fact they have backpacks to carry the ship parts around is a huge perk! The component quality is very high and the production value is awesome on this one.

The Good:
The fact that this game is simple enough for younger gamers to pick up and play on their own yet engaging enough for adults to enjoy is a great feat of game design. The artwork is fun and ties the theme and mechanics in well. It sets up and plays fast, and looks great on the table.

The Bad:
Don’t expect to bring this game out with your hardcore gaming groups as it will not go over well. Mole Rats is very much geared towards younger gamers getting their feet wet with cooperative gaming, and therefore is not super strategic and thought provoking. That is what Shadows Over Camelot is for.

Final Thoughts:
I really think Mole Rats in Space is a great fit for families with younger gamers looking to play more than Candy Land and Sorry. This has been a good game for my 5 year-old to get involved with and it keeps his interest for the whole time. Peaceable Kingdom did a superb job of getting famed designer Matt Leacock to jump in on this one.

Players Who Like:
I am going to change this up and say families looking for a fun cooperative game that they can play with their younger children will love Mole Rats in Space! 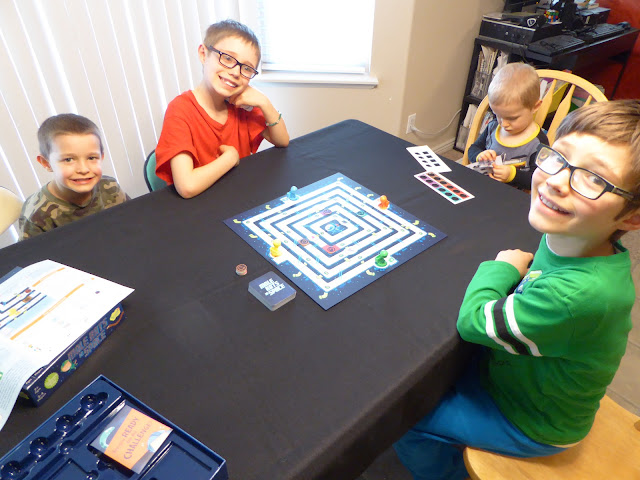 Check out Mole Rats in Space on: