Honshu, meaning “Main Island”, is the largest and most populated island of Japan and is home to some of the most amazing architectural creations and stunning vistas found in the world. Honshu the game is as equally stunning and just as amazing as the real place.

In Honshu players will take on the role of Lords and Ladies of Feudal Japan seeking to gain new lands and with it fortune and honor. The player who can do this the best wins. 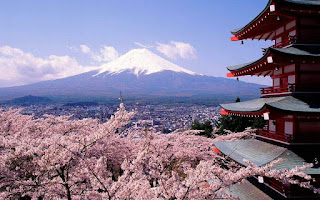 To set up Honshu each player is given a scoring reference card and a random starting province card which is placed in front of them on either side—A or B which is determined by the group ahead of time. Resources cubes are then placed in the center of the table and each player will take the matching resource cubes for the production spaces on their starting province card.  For example if Player A has a stone and lumber production symbol they would take a grey and brown cube to place on those two spaces respectively. The remaining starting province cards are removed from the game. The map cards are then shuffled and players are dealt six cards each creating their starting hand. Finally each player is dealt a random order card to determine the opening player order.

There is a variant for scoring which requires players to choose (randomly) an end game scoring card that changes the way the final score is calculated.

Honshu is played over twelve rounds each of which are broken into two phases as follows:
1) Phase One – Card Selection. In player order, starting with the player who has the number 1 card, each player will choose a map card from their hand to play face up in front of them. While choosing a map card players may spend one of their resource cubes (from this city) to add 60 to their card’s total. Be careful though as you may be giving up valuable end game points.

Once all players have played a map card the player with the highest numbered map card (plus resource bonus) takes the number 1 order card, the next highest will receive the number 2 order card and so on. Once all order cards have been passed out players will choose one of the played map cards to add to their city (again in player order). This continues until all cards have been taken.

At the end of the twelfth round the game ends and final scoring takes place. Each forest space in a players city is worth 2 points, each town space is worth 1 point in the player’s biggest town. Each factory scores according to the number of points indicated next to it if the player can put a matching resource cube on it. Note cubes can only be used once. Finally lakes are worth 0 points if they are only one square, 3 for two squares, 9 for three squares and so on. Points are added together and the player with the most points wins!

The rules also come with an nice two player version and I have made up my own solo variant.

I am just going to come out and say it, I love this game! From my first play Honshu instantly went into my top 15 games of all time and hits the number one spot for small filler games. Yes, I think it is that good. Small, elegant, clever, full of interesting choices, and fun. Tough combination to beat right there.

As is the case with most filler games Honshu is very (very) easy to set up and quick to get into. It is also simple to learn and teach to gamers and non-gamers alike over a wide age range. Don’t let my simple talk fool you though, Honshu has some teeth.

Honshu is a great mix of a trick taking game like Hearts and a tile laying game like Carcassonne, and hey let’s throw in a little resource management while we are at it. Player order can be such a crucial part of this game and the trick taking element really amplifies it. Players are often burning brain cells trying to decide if they want the first player order card bad enough to spend a resource cube sacrificing end game points or if they should play it safe and go for a slightly less optimal map card.

While playing their newly acquired card a whole new set of decisions come into play. Do I go for forest and cover up that resource production slot or continue to grow my town? Unfortunately this can lead to some analysis paralysis and slow game play down, but you can always grab a sand timer to get them moving faster.

While the mechanics are spot on, the theme and artwork really bring this one home for me. The cover art is amazing and the map cards are very whimsical. The card artwork reminds me a lot of Kingdomino and Limes, but all three play very differently. The production value on this one is what you would expect from Renegade Games Studio—super high quality. They are quickly becoming one of my favorite publishers.

The Good:
I pretty much love everything about Honshu and even find myself playing it solo a lot (as I mentioned above) just to get more games in. The mechanics are tight and visually the game looks great. There is something very gratifying when you see your finished city on the table before you.

The Bad:
The only downside here is the aforementioned analysis paralysis, which can really happen in a lot of other games as well. Like I said grab a sand timer and a shock collar and you shouldn’t have any problems.

Final Thoughts:
Honshu will for sure be in my top ten games of 2017 and may sneak into the top ten all time list. This is a great game for regular gamers, new gamers, old gamers, young gamers, and non-gamers. I guess I could have just said all gamers.

Players Who Like:
Players who like trick taking games, tile laying games, and fun fast light games will love Honshu.

Check out Honshu on:

Get your copy of Honshu at your LFGS or online at AMAZON.