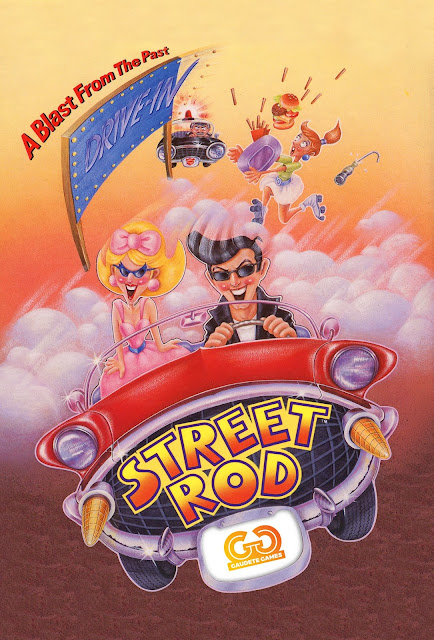 You hear the purr of an incoming engine; you know that purr from anywhere. You and your father worked on that car for years in his garage. The purr of that custom built Tunnel Ram engine with the fully worked racing carburetor. It is like music to your ears, and as the purr rounds the corner you see it for the first time in years. The purple is almost mirrored polished and the sun glistens on it like it was aimed directly at it. You built that Ford Deuce Coupe from the ground up and you know all its strengths and weaknesses; you are here today to bring it back to its rightful home. You know your Street Rod is up to the challenge. Let the Race begin!

Shuffle the cards and distribute them all equally to all players. The player with ‘The King’ in his starting deck, is the first player. Each player chooses from his starting-deck cars and parts (Opponent-cards cannot be bought) worth $500 and puts these on his hand. The remaining cards are shuffled again. This is the card supply stack.

1) Draw 5 cards off the card supply and place them face up on the table.

Each player can take one or more of the following actions in random order:
a) Execute opponent-bonuses – Every opponent-card has a specific bonus-action, which can be performed on every turn. If you have an opponent card in your hand you may execute that bonus action. Keep the card in your hand after doing so.

b) Customizing your car – You can buy what you need from the 5 cards that are open at the table. By buying extra parts or replacing some you can expand your cars’ power and / or acceleration. Each round you receive $200 income to spend on cars or parts. Also all cards in your hand can be traded against the price indicated on the card you are purchasing. There is a maximum of 7 cards you may hold in your hand. You cannot save income until the next round.

c) Racing against an open opponent-card on the table – The opponent-card shows the strength of your opponent on three different tracks:
• Drag Race
• the Mulholland drive
• the Aqueduct Race

Your own score per track is built out of the power ; and the acceleration-score of your car and its compatible parts (on your hand) and all your gained racing skill points.

d) Racing against another player – You race by following these steps:
1. Choose your opponent
2. Choose the track (Drag Race, Mulholland Drive or Aqueduct Race)
3. Your opponent determines the stakes: what card the winner can take from the loser? (the cheapest / the car / the engine etc…).
4. Both players show their cards simultaneously
5. Calculate your own score and your opponent’s score
6. WinPoints = own score – score opponent (negative win points are possible, this does not automatically mean you’ve lost)
7. Draw a card from the card supply
8. Check the Bad Luck Indicator. If your WinPoints are equal to or greater than the Bad Luck indicator, you’ve won the race.
9. If you win, your opponent will give you the card he mentioned in step #3. If you lose, you’ll give him the card he mentioned in step #3.

Once a player has finished his turn, the new player removes the remaining cards on the table (he may leave one or two open, if he likes the cards). Then draws some cards from the supply until there are again 5 open cards. If the card supply is empty then shuffle the discard pile and use it again as the supply.

If you’re good, you win some bucks. If you’re better you can win the other guy’s rod. If you’re the best, you can beat the king. Then you’ve won the game. 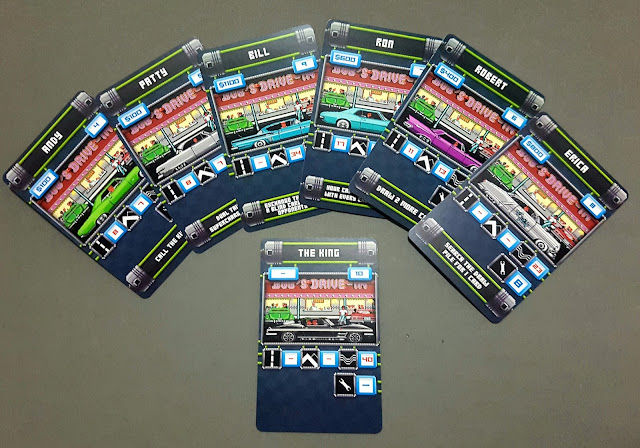 Street Rod is nostalgia overload for me. I can’t tell you the number of hours I spend playing the computer version of this game as a kid…. and maybe a teenager too. I honestly think my love for Old School America Cars came from this game. It had such a massive spot in my heart as a kid and I knew the moment Dane posted the review opportunity that I wasn’t going to play fair, I had to have it!

Childhood memories came flooding back to me as we played and I felt like I was back in my Dad’s study on his work computer, playing the game I loved so dearly. But this time I had friends with me and was playing it with cards.
Street Rods is everything I remember from the original computer game; the art is the same stunning 8-bit graphics of the cars of yesteryear, with vibrate colors and outrageous decals. The greasers from the 1960’s; and the original Diner scene from the game were just as I remembered. It really has everything from the original game; which made me so so happy and fall in love with it all over again.

It was so hard to be objective coz of my history with the game, however this card game is easily as fun as the original computer version. The only real complaint for me is that the game turns can go a little long, especially if the player is doing all the options of their turn and choosing to battle one of the NPC cars. This creates a lot of down time, especially in a 4 player game. We ended up making a house rule that if you race an NPC you may not do it in the next round. This made for a lot more player interaction and helped the flow of the game.

Street Rod is a great little filler game and if you ever played the computer game version you really need to get this one. It is so close to the computer game and truly take you back to your childhood (depending on your age). But even if you haven’t played it but love 8-bit art work and Old School Cars this is a super fun, take anywhere, filler game for the whole family.

On Kickstarter now through June 24. 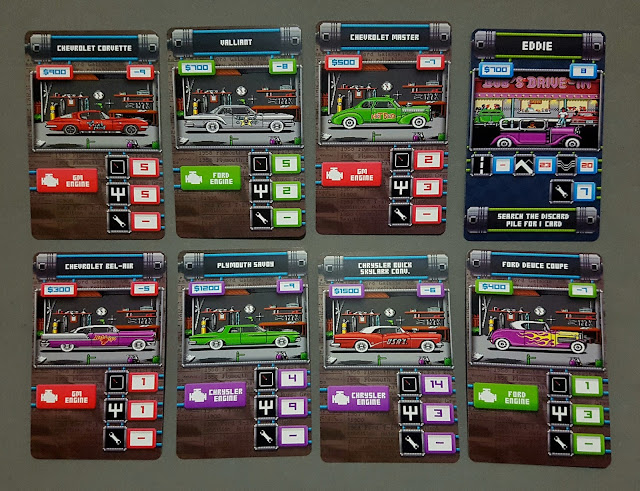