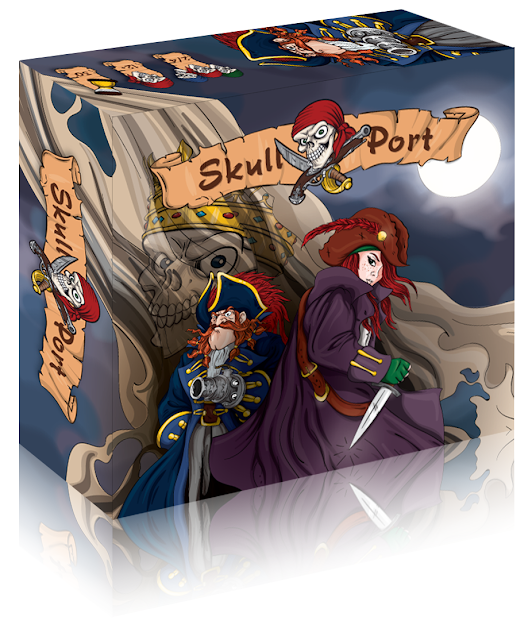 WARNING: This is a preview of Skull Port. All components and rules are prototype and subject to change.

Ahoy, Me Hearties! All hands on deck, batten down the hatches, secure the main lines, because we are about to embark on a pirate voyage not meant for just any Landlubbers, only the brave at heart. Welcome to Skull Port!

In Skull Port players take on the role of a feared pirate captain vying for the role of the Pirate King! To do this players spread their influence on ships and ports to score points and earn doubloons. The player to do this the best wins the game!

Set up for Skull Port is a breeze as players set the Port, Ship, Captain Bonus, and Scoring Bonus cards in the center of play. Each player chooses a pirate captain and the accompanying influence tokens placing those in front of them and you are ready to go. 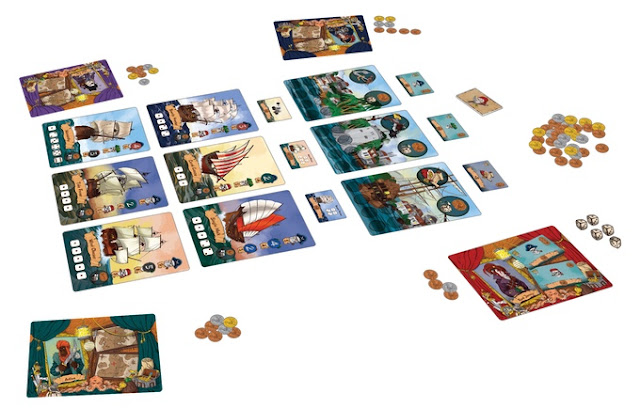 Once ready the starting player will roll the five dice, the object being to roll a combination that matches one of the six Ship cards on the table. Combinations include three of a kind, two pairs, a full house, four of a kind, five of a kind, and a straight. Players will get three total rolls in order to create the desired combination setting aside the dice they want to keep with each roll. Once a player has successfully rolled her combination she will choose an influence token to place on the ship that matches her dice roll. Play then moves to the next player who repeats the above actions.

Players can also earn and use doubloons which are spent in order to manipulate dice rolls or buy Captain Bonus cards to become more powerful.

The game ends when players have placed all ten of their influence tokens on the different Ship and Port cards. Final points are then calculated from the different positions on each ship, port majorities, and number of doubloons a player has left in her stash. The player with the most points wins and is crowned the King of the Pirates!

I love dice chucking games and Skull Port does not disappoint in that aspect. There is plenty of dice rolling, and like any good dice chucker, there is some dice manipulation to offset the luck aspect.

Setup and game play is straight forward and the rules are easy to learn and teach making for a good family friendly game that can be played in about 30 minutes. Two of my boys (7 and 9) were able to pick it up quickly and enjoyed it quite a lot. I am not sure why there is a 12+ age recommendation it should be more like 8+.

The main mechanic of dice rolling to create certain combinations will be very familiar to a lot of gamers as it is the same used in games like Yahtzee and King of Tokyo (a family favorite). If you are not a fan of that style of game don’t let that turn you off . You have many choices each turn and being able to manipulate the dice (for a price) ads a lot of game play to an old reliable mechanic.

Adding the pirate theme to the dice rolling mechanic was a good choice as it fits well with the “take that” element that is present. Players are constantly bumping one another down a ship’s influence track or off the ship completely or vying for control of the ports in order to gain the most loot. Hey it is a pirate game after all, it isn’t suppose to be hugs and kisses.

The finished artwork I have seen so far is spot on for a Pirate themed family game. The card layouts and symbology are equally great as they are clear and easy to follow. I ended up reviewing a print-and-play version of the game and don’t know what they intend to use for the materials on the final copy. My guess is it will be good. 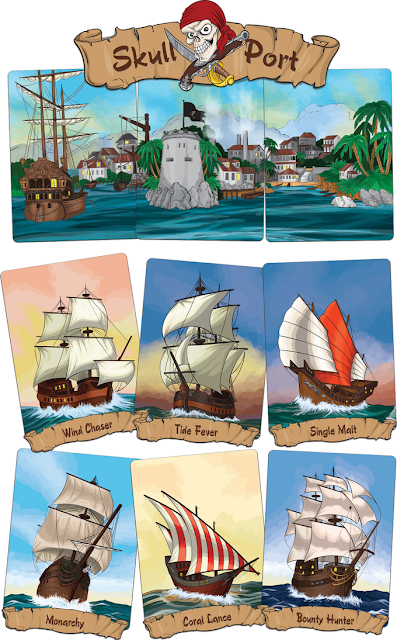 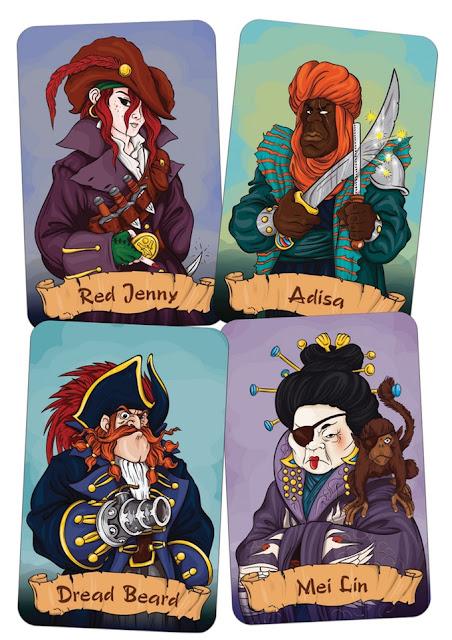 Not a lot to complain about with Skull Port. The game seems well balanced and as mentioned above the luck aspect can be mitigated through dice manipulation. That said, I do wish there were a few more ways to manipulate the dice and I feel greater variety could be brought to the game by adding more ships with different dice combinations. Still put out six for the game but make it so you don’t know which six are coming out. I am sure some of these could be addressed during the Crowd Funding campaign with stretch goals. 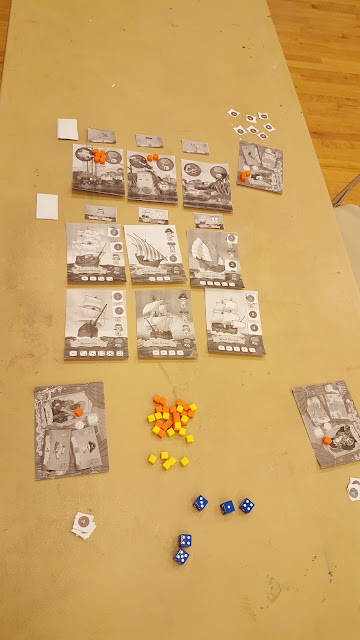 Final Thoughts:
My boys and I really enjoyed Skull Port and the pirate shenanigans that accompanied it. You would think with so many pirate games out there that a new one would just feel the same, but that isn’t the case here, Skull Port feels fresh and new. Hopefully we will see a little more variety with the re-launch to make the game that much better.

I am giving Skull Port 7 out of 10 super meeples.

Check out Skull Port on:

Coming back to Kickstarter soon.