Renegade Games has announce the release of yet another game—Atlas: Enchanted Lands.

Atlas: Enchanted Lands is an elegant card game set in a world of fairies and magic. Play cards to reveal a certain place and time — and place your stake in one of the two. Explore a location at dawn, day, sunset, and night, or see what the whole land looks like in the dark. Each card offers two choices, and it’s up to you to uncover the world that awaits.

Players are challenged to predict the Time or Place that will be uncovered first. Cards laid on the board will complete sets. Depending on the cards chosen by the players, sets of similar cards or numerically ascending cards will be revealed, granting points to the players that deduced the correct combination.

Look for Atlas: Enchanted Lands at friendly local game stores and online Fall 2017. Atlas takes about 20 minutes to play and is for 2-4 players ages 8+ with an MSRP of $20. 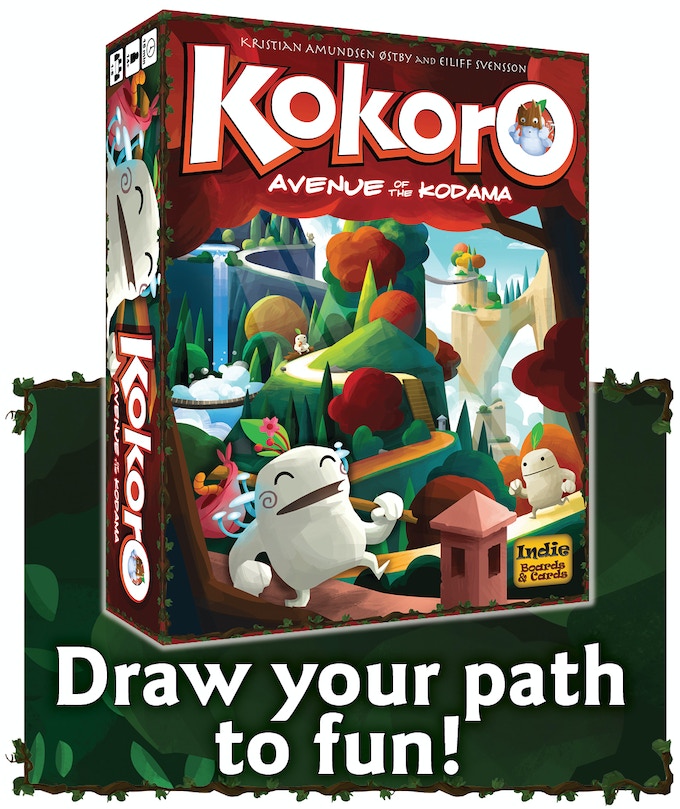 Kokoro – Avenue of the Kodama is a re-skin of a game that came out last year at Essen called Avenue, and is an exciting family game that can be played with up to six players (with a stretch goal to expand to more)! Each player has a forest map to draw their paths and turns are simultaneous so the game plays quickly. Connecting your sanctuaries to offerings will gain you favor. Choose wisely because you never know exactly when the sanctuary will score. And you shouldn’t be too greedy, if a sanctuary is not connected to more offerings than your previous sanctuary, you lose points!