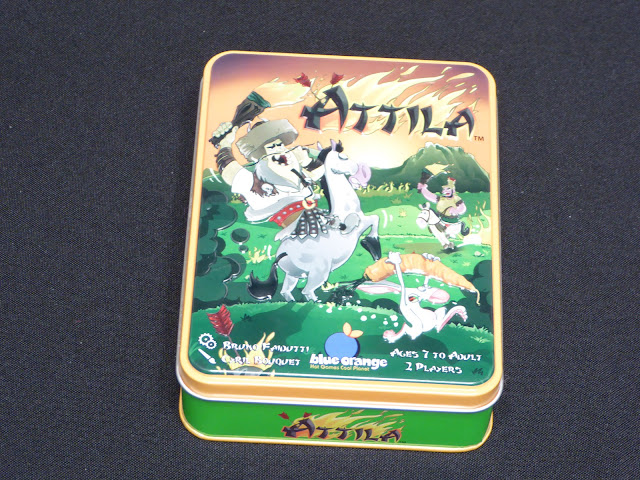 The feared barbarian warlord Attila has been terrorizing the Roman lands for years. Who will step in to stop him? Can you lead the troops of Flavius Aetius to victory over this ruthless tyrant?

Players will be taking control of either Attila’s feared horsemen or Flavius’s Roman armies in the Battle of the Catalaunian Plains. The object of the game is to force your opponent to the point they can no longer move any of their Knight Tokens. The player to do this will be victorious on the field of battle this day!!!

To set up Attila players will set the four playing boards in the center of play side by side. These can be an any configuration (except diagonal) adding to the replay value of each game. Players then take their three Knight tokens and in turn order, and one at a time, place them on any open space on the pre-constructed board. There are also recommendations for setting up your first few games in the rule book. Lastly players place the Scorched Earth tiles next to the board.

Players are now ready to begin. On a player’s turn he will do the following two actions:

1) Move one of his Knight tokens to an open space. Players move their knight tokens like you would a Knight piece in a game of chess—an “L” shape. One space in one direction then two in another direction or vice versa.
2) Place a Scorched Earth tile on to the board.  Players can place a Scorched Earth tile on any open space on the board. Once placed the space is now considered occupied and can not be moved into by either players.

Play goes back and forth between the two players taking the above two actions until one player can no longer move ANY of his Knight tokens. At which time his opponent wins!

As you know by now I really enjoy most titles from Blue Orange Games even though many of their games are light and play super fast. But hey it works out well for me since I have four boys under the age of 10 with short attention spans. So how does Attila stack up against Blue Orange’s other titles?

Attila is a wonderful two player abstract strategy game that uses a grid movement mechanic that should be familiar to anyone who has played Chess. When players move their pieces on the board, from one square to another, they do it in an “L” shape like that of a Knight token in chess—either one up and two over or two up and one over. This basic mechanic is very easy to pick up but also makes the game very challenging. I really enjoyed looking for ways to block my opponents with both the scorched earth tiles and my Knight tokens while not getting trapped myself.

As mentioned above Attila is a very fast game to play and set up is a breeze. The rules are in a small booklet that takes minutes to read and understand so play can start quickly. Also players of all ages and abilities can easily dig in to this one.

The artwork and components are very solid as I have come to expect from Blue Orange Games. The board is made up of thick cardboard along with the Scorched Earth tiles and the player’s Knight tokens are made out of sturdy wood. I Love the cute artwork and the theme although it is not needed it still makes it a lot fun! 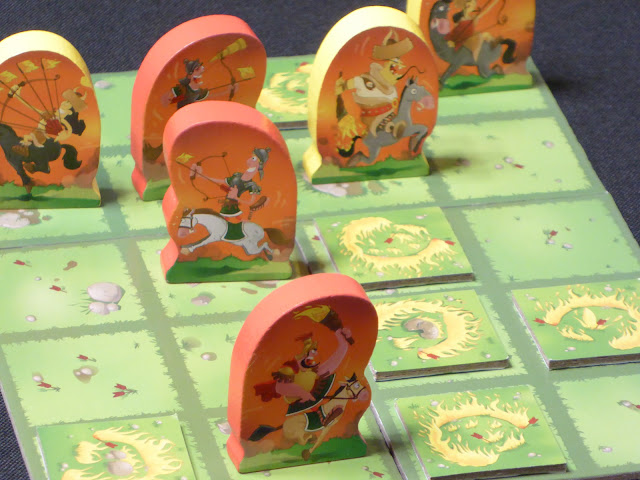 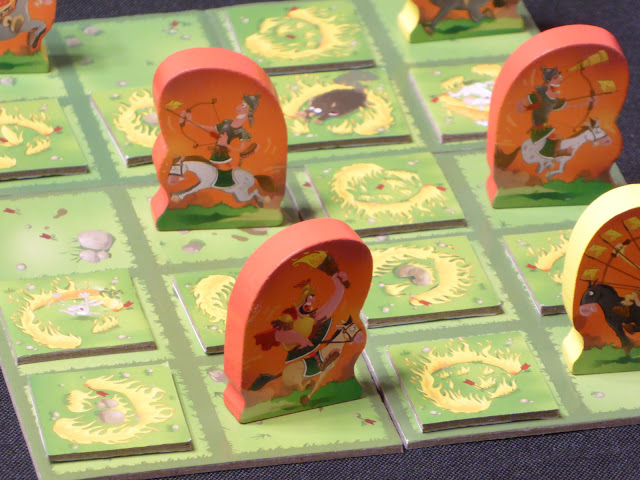 My one draw back on this game is the tin it comes in. I am not a fan of tins as a whole since they don’t stack well, but man this one looks awesome!

Attila is fun and fast yet challenges even the most strategic of game players. It is accessible and easy to learn yet offers a lot of depth similar to that of chess. This one is for sure going onto the shelf (if I can get it to fit somewhere) and will see a lot of play (as it already has). And hey for under $20 why not?

Players who like abstract strategy games like Chess, Go, Santorini, and Onitama, and wish to play them with their kids, will love Attila!

I am giving Attila 7.5 out of 10 super two player meeples.

Check out Attila on: