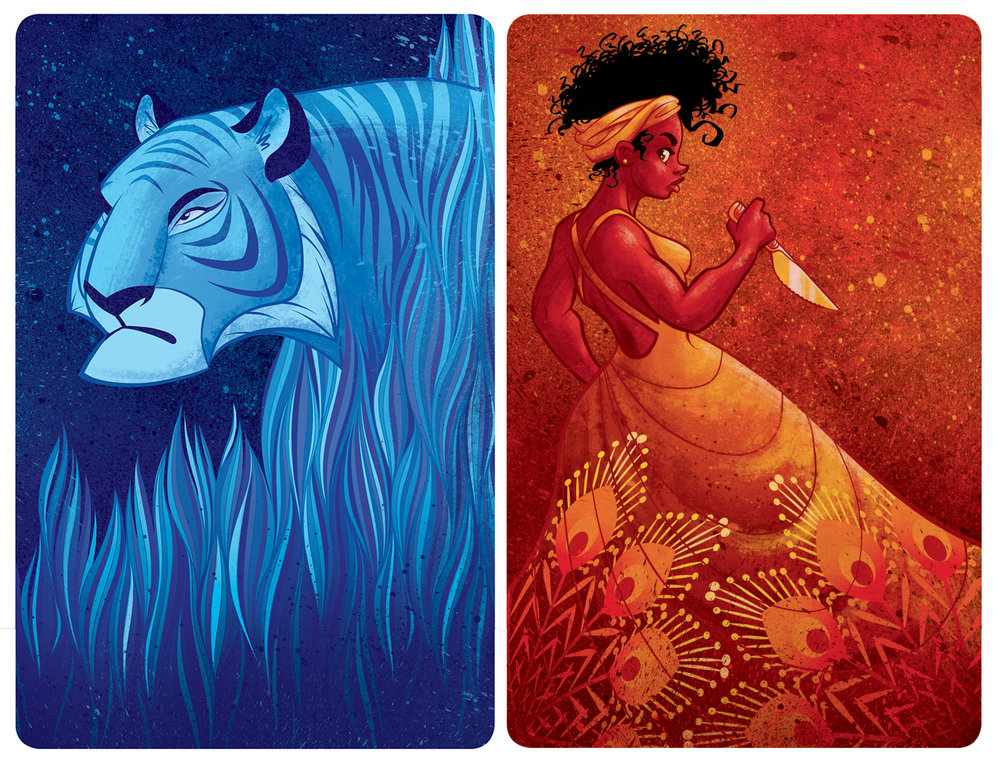 You must choose one door. Behind the door is either a beautiful Lady that you will marry, or a ferocious Tiger that will….well…eat you alive. How will you choose? You must deduce through your opponents actions whether a Lady or a Tiger lies behind their door, but be careful because they just might be bluffing.

First off, before we go any further, let me just say this game is gorgeous. The artwork on the cards is phenomenal. 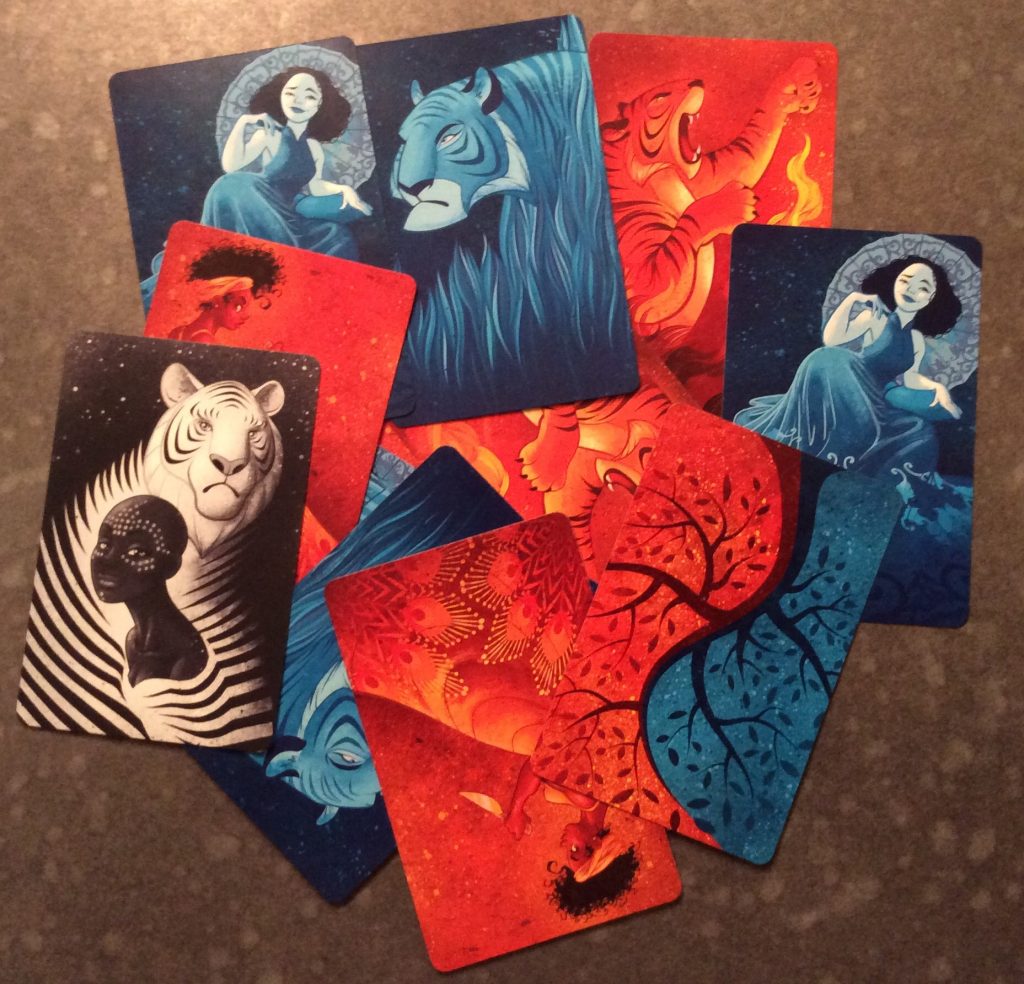 The first time I got my hands on it I was very impressed. The gameplay however, did not impress me at first, but that is because I was playing it wrong. (Thank goodness). I have never been so happy to be wrong about a game. I really wanted to like this game, and now that I have played it correctly, I can say that I do, I really like it.

Let’s take a look at the Gameplay:


The Lady and the Tiger is a 2 player microgame that consists of 18 cards (4 door cards and 14 clue cards), that’s it. But, as with all good microgames, that’s all you need. There are two roles in the game, Collector and Guesser, and players alternate between these two roles each round. The goal of the Collector is to collect a set of 4 cards that match their identity. The goal of the Guesser is to guess the Collector’s identity.

Setup is really easy. Simply deal one identity card to each player and then flip 3 cards face up to form a display. 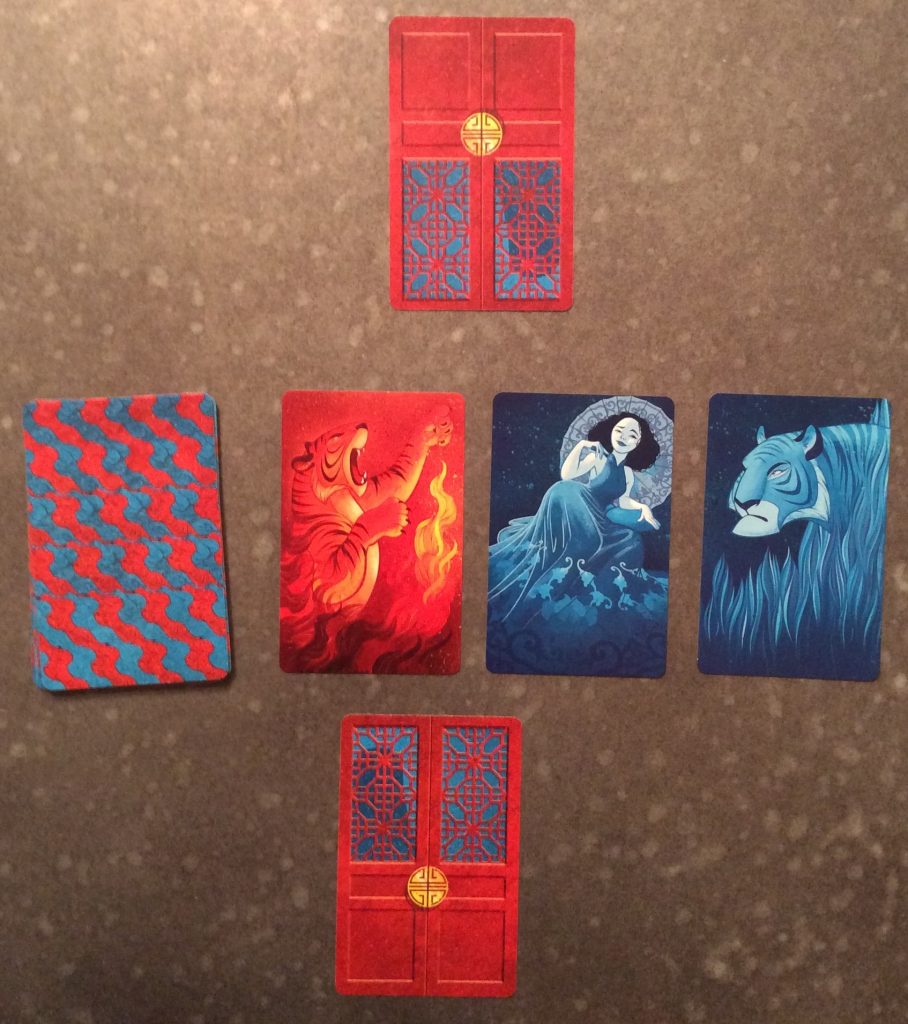 Collector: On your turn you will take one clue card from the display and place it face up in front of you, then refill the display. You are trying to collect cards that match either of the attributes of your identity card. For example, if you are the Blue Tiger, you can collect either Red or Blue Tiger cards (since they match the Tiger attribute) or Blue Lady cards (since they match the Blue attribute). Any of these cards will count towards the 4 cards needed to complete your set. The Red Lady would not. 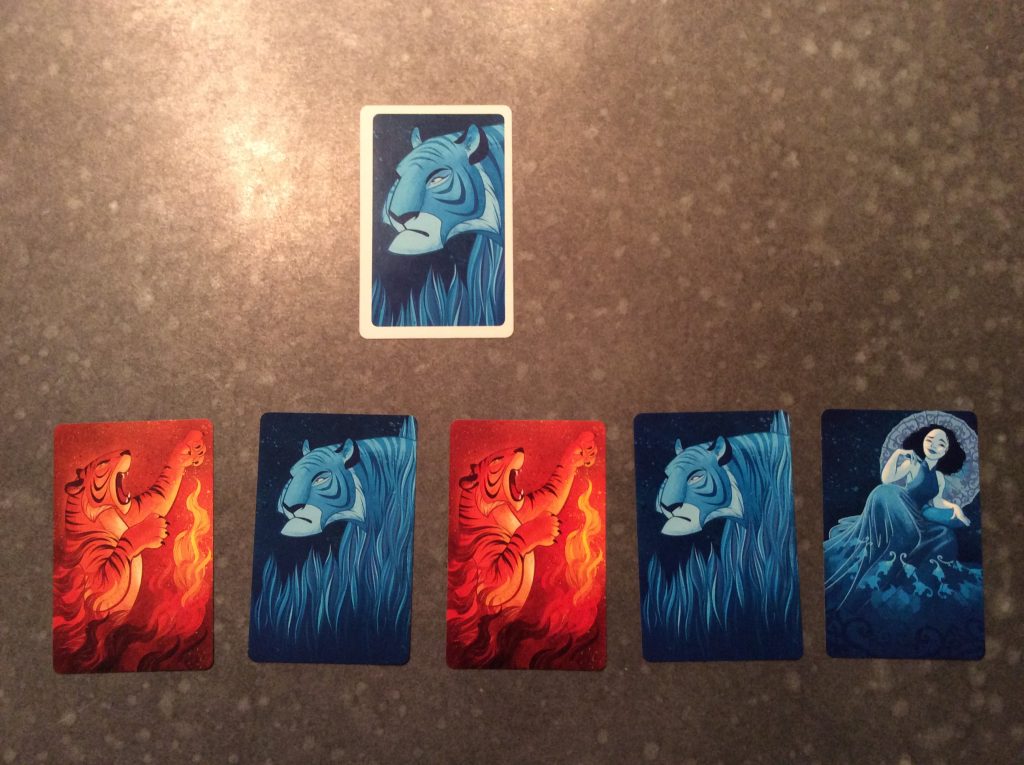 In addition there are 2 special cards that you can use. There is a Lady/Tiger card that counts as either a Lady or a Tiger and there is a Blue/Red card that counts as either a Blue card or a Red card. Both of these cards are very useful to the Collector as they let them add a card to their set without giving away any information about their identity.

Important: you do not have to take a card that matches an attribute on your identity card. If you are the Blue Tiger, you can choose a Red Lady. It will not count towards your set, but may be just as helpful by confusing the Guesser.

If you successfully collect 4 cards with the right attributes, you score 3 pts.

Guesser: On your turn you will choose one of the clue cards in the display and remove it from the game for this round, then refill the display. This allows you to limit the options for the Collector on his next turn. You will then have the opportunity to guess the Collector’s identity, which you will be trying to deduce by watching which cards they collect. Once you are confident that you have enough information, you may attempt to guess whether the player is Blue or Red, whether they are Lady or the Tiger, or both.

If you guess one of their attributes correctly, you score 1 pt. If you guess both correctly you score 5 pts. But if any part of your guess is wrong, the Collector scores 4 pts and you score nothing, so be careful. In addition if you make it to the 5th round and the Collector still doesn’t have a set collected, then the Guesser automatically scores 2 pts.

As soon as anyone scores any number of points, the round is over. Players switch roles and a new round begins. First player to get 10 pts wins.


So I’ve said already that the game is gorgeous, which is part of what drew me to it in the first place. The other thing was the connection with the classic short story, which I have always loved, but knowledge of which is not necessary to enjoy the game. This game celebrates that theme wonderfully in both its artwork and gameplay (and its length). It is a quick little deduction game that is easy to teach and can be easily taken with you and played anywhere.

When I first started playing the game, I thought that the advantage would always go to the Guesser. Mistakenly, I thought the Collector had to choose a card that matched at least one attribute of their Identity card. Once I realized that you could choose any card, and thereby psyche out the Guesser with your fantastic bluffing, the game suddenly became much more balanced, and much more of a game.

The special cards (Lady/Tiger and Blue/Red) are particularly powerful. 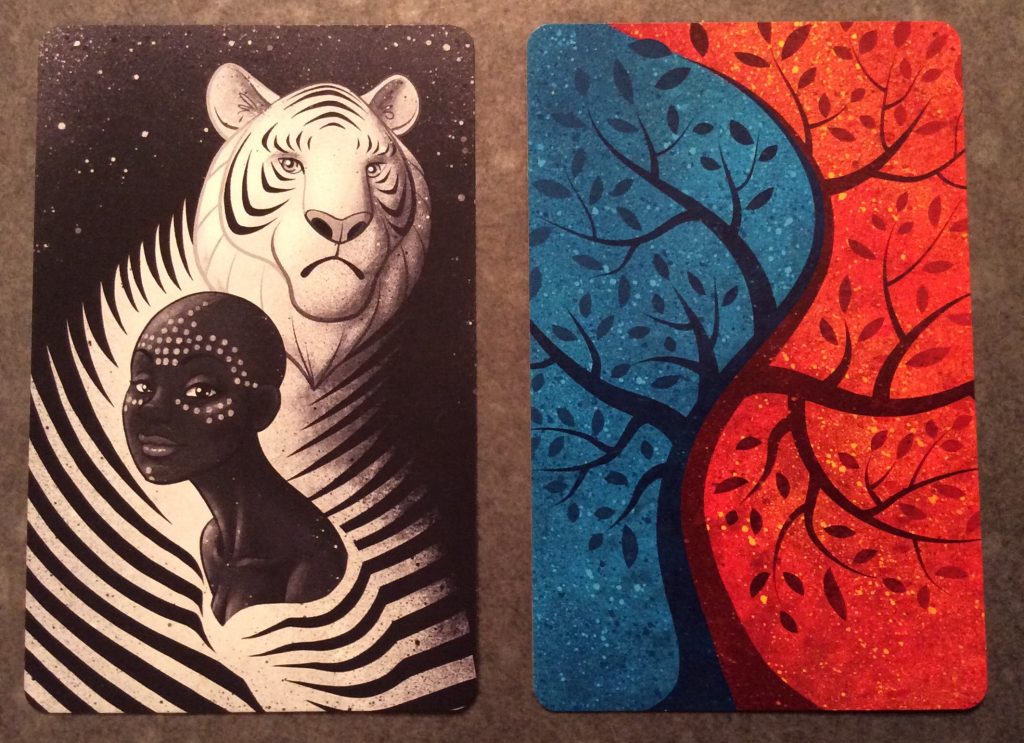 When they come up on the Collector’s turn, they allow you to get one step closer to your set without giving any information away. But they can be just as important to the Guesser when they are able to discard them, keeping them out of the hands of the Collector.

But perhaps the most often overlooked piece of information is the card that the Guesser gets dealt at the beginning of the round. Since you have one of the four door cards, you know the Collector does not have that one, and this makes a world of difference. Sometimes I would forget for a moment that I had that information as the Guesser and then I would check my card again and know exactly what to guess.

This is very much a Microgame and as such doesn’t take very long to explain or to play. But, that certainly doesn’t take away from it’s fun or it’s replayability. Plus the striking art makes people stop by just to see what you are playing. It combines bluffing and deduction in a tiny package and does so really well. It has just enough variation and choice to make it challenging, but not so much that it feels too thinky. A fun quick, light little game that I’ll be taking with me.

Jellybean Games provided us with a copy of the game as part of the Everything Board Games Network in exchange for an honest review, which is exactly what we have provided.

The Lady and the Tiger will be on Kickstarter starting March 7, 2017. Get updates at http://www.theladyandthetiger.com, which will rollover to the Kickstarter campaign once it goes live.