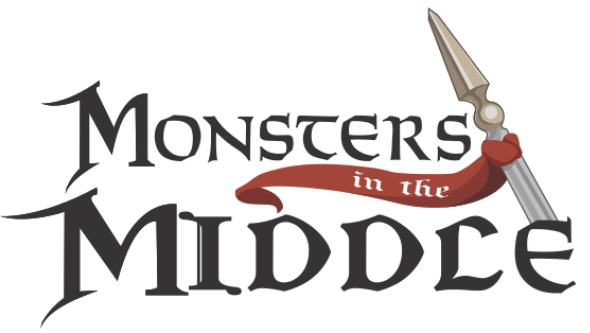 So if you’ve ever played Speed, then you are most of the way towards knowing how to play Monsters in the Middle. Well, one version anyway. There are 2 different ways to play the game. One that is super speedy and one that is much more methodical and allows you to employ a bit of strategy.
Setting up Monsters in the Middle is really easy. Everyone takes a Hero mat, each with their own special power that takes effect when scoring at the end of the game. Place all the mats so that everyone can reach them. 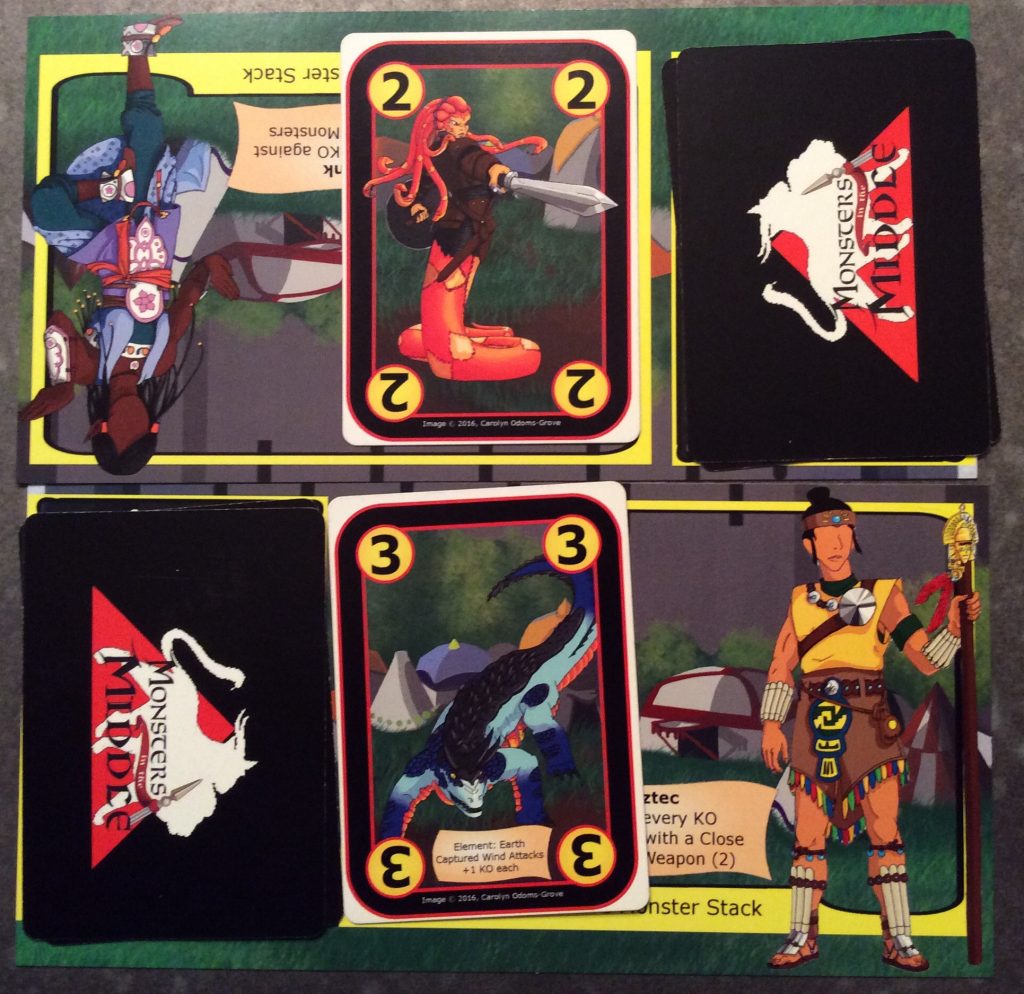 You deal out the Monsters evenly to everyone’s mat and then everyone takes and shuffles their deck of cards (37 cards each). The Base game comes with enough for 2 players, the Deluxe set will come with enough cards for 4 players.

But…the basic gameplay is the same either way you decide to play it. The goal of the game is to get rid of all of your cards, and to score K.O.s against the Monsters. You do this by playing cards either one number higher or one number lower than the current card on the top of the stack. So…if a 4 is showing, you can play a 3 or a 5. 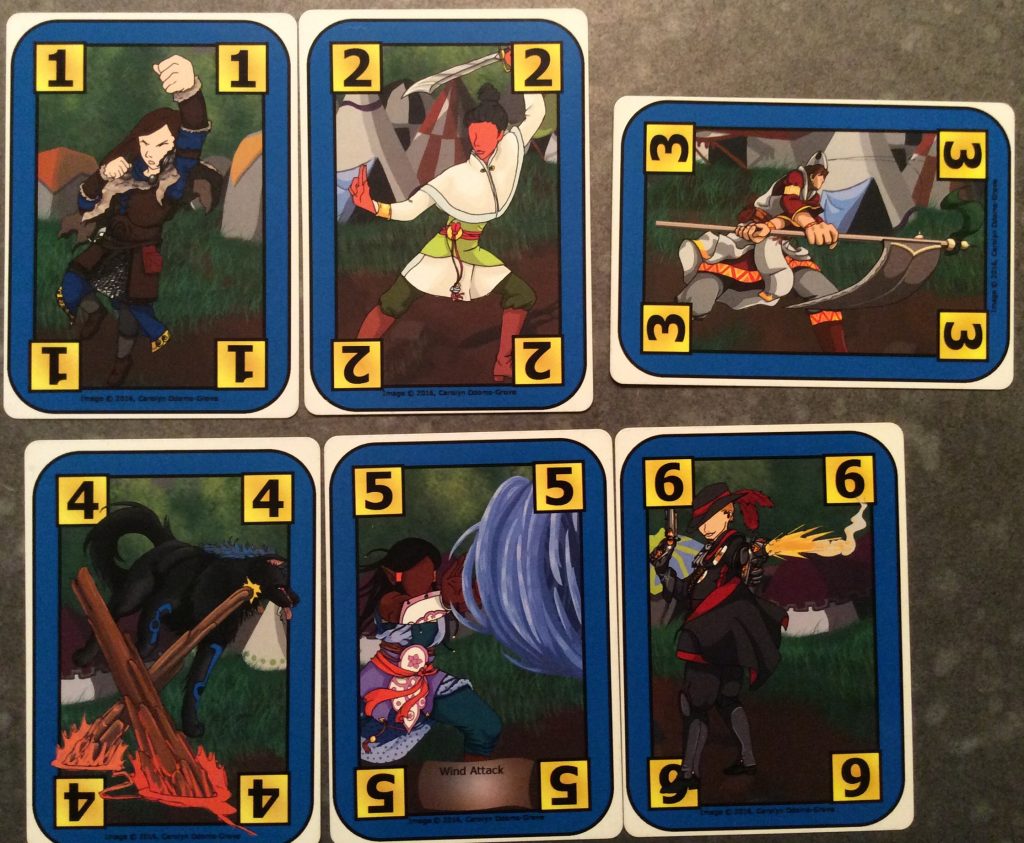 At any time you can play any of the three special cards, the Move, Treasure or Recovery cards. These are called Focus Cards.

Treasure cards either count for you or against you at the end of the game. Recovery cards remove cards from the game. Move cards simply count basically as wild cards. But, you have to be careful when playing Focus cards because you can play any of your cards on the stack after these. This may give your opponent an opening to play their cards before you can get your next card in play.
In order to K.O. a Monster, one of each of the number cards (1-6) must be played on top of the Monster cards. This seems pretty simple, but at the end of the game a bunch of the cards will be removed with the Recovery cards, so sometimes it takes a lot of cards before you actually score a K.O.

If there is a time when no one can play a card on top of any of the current cards, or if everyone decides to pass, then you flip over the next Monster card onto the stack. This is the only way new Monsters come up in the game. In several games that we played we never had a new Monster arrive – two Monsters the entire game.

Grand Meld Mode- The fast game is basically Speed with a different way to score at the end. Both players frantically throw number cards down in an attempt to complete a set of 1-6. But, in reality, it was merely trying to play as many cards as you could before your opponent so that you didn’t run out of cards. At that pace, it is very hard to keep track of which cards have been played where. The rules recommend you play the slow version several times first, or at least until you get the hand of it.
Champions’ Deul Mode – The methodical game is a little more strategic,as you can kind of plan out your moves. In fact, you are allowed to play one quarter of your cards each turn if you can play them correctly. On your turn, you can play up to 10 cards, which means the 5 in your hand plus five on the top of your deck. But, you are allowed to draw 1 as soon as you play 1 so it keeps your options open, even if it becomes a little hard to track. I found myself drawing five without looking and keeping them off to the side in case I needed to draw more, which kept me from playing too many. After you play up to 10, your opponent gets to play. This version of the game lets you plan out your moves somewhat as you can play your cards uninterrupted by your opponent.

At the end of the game you start at the top of the deck you have just compiled on top of each playmat and start looking towards the bottom. When you find a Recovery card, you remove the designated number of cards from the stack and place them to the side. Then you start at the bottom of the deck and check to see if each Monster was in fact K.O.’d. If there is a set of the number cards 1-6 on top of the Monster card, you score a K.O. Only the player who played the final card in the set will score any points for this Monster. If there are any Treasure cards left in these stacks, they add to your score. Also there are bonuses that pertain to the Monster and to your Hero’s special ability. Add any bonuses to your K.O. Count and then subtract any penalties from Treasures that were removed by recovery cards and you have your total. Usually our scores were something like 4 to 3.

So, what do we think?

The Fantasy theme is ok, but the gameplay is often too frantic to allow it to take shape. There are Hero Characters, but they seem to be all over the place. 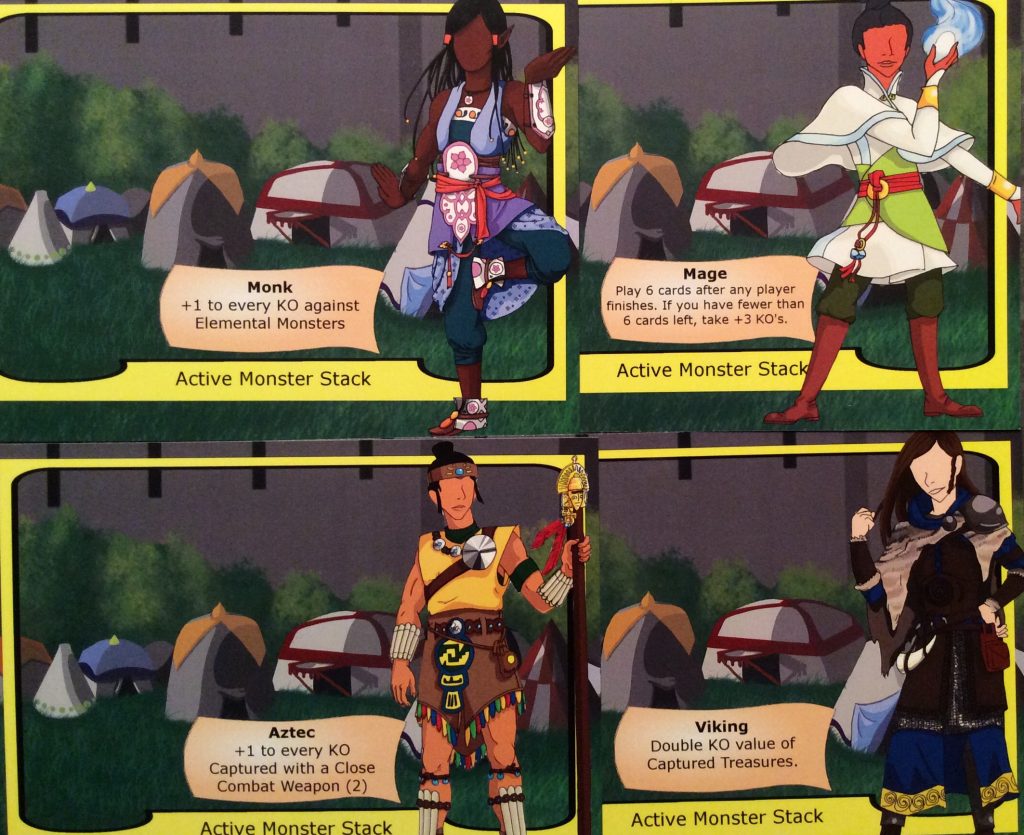 There is a Monk, a Paladin, a Priest, a Ranger, a Mage, your typical Fantasy characters, but then they throw in a Viking and a Musketeer and an Aztec. Seems kind of a strange mix. The numbers on the card are meant to be range numbers 1-point blank range 2-close range, all the way to 6-long range. This makes the Move card make sense. It is supposed to represent your character moving from one range to another in the midst of battle, but honestly unless you are playing the slow strategic version, you are throwing cards down so fast that you don’t have time to worry about the Move card making sense. At that point it is just a Wild card.

The art is incomplete. This is on purpose. When you look at some of the cards in this review, they will not have faces. This is so that backers of the Kickstarter can have Heroes drawn in their own likeness, so don’t let that deter you. Even the art that is complete, like this Minotaur and Wolf seems are going to get another revision.

The scoring is a whole other topic and kinda feels convoluted and like a battle itself. It takes a couple of games to really get the hang of it, but after a while moves fast enough to not be a hindrance but always feels like an unnecessary process.

There is really not enough gameplay to warrant spending that much effort on scoring, especially when the final score is often 4 to 3, or 5 to 4.

The slow version is really the only way to have any strategy whatsoever. If you are paying close enough attention, you can figure out when a Monster has enough cards built up in order to be K.O.’d . Then you could pass your turn and try to bring another Monster into the fight. But, these cards could still be negated by the Recovery cards, so it might be for nothing. Plus only the player who actually played the final number card gets credit for the K.O. So, you could’ve contributed half your deck towards defeating a specific monster only to have your opponent swoop in at the last minute and steal your victory.

The fast game seems like a whole bunch of luck, which may be of a little concern to some people. I suppose that someone who is extremely observant and very good at counting cards could develop some strategy in the fast version. To me it just seems that at the end of the game, you are just hoping that the cards will fall your way. If so, yay. If not, well, at least you haven’t wasted that much time playing.

All in all I think that this is a game for beginning or young gamers. Experienced gamers may get frustrated with the randomness and the scoring and tune out.

I think that there is potential for this game to grow – and it will be interesting to see how it develops.

Ten Point games sent us a copy of Monsters in the Middle as part of the Everything Board Games Network in exchange for an honest review, which is what we’ve provided.