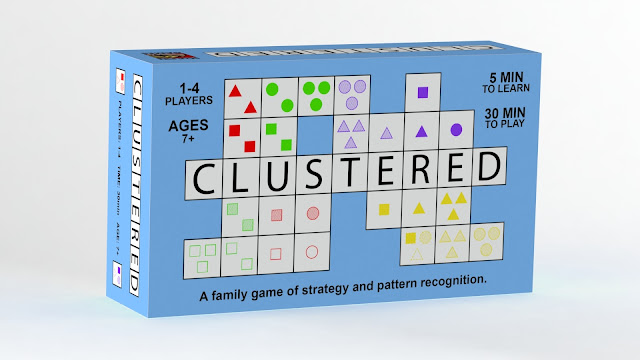 WARNING: This is a preview of Clustered. All components and rules are prototype and subject to change.

Clustered is a tile matching game like many you have played before with slightly different variants. In Clustered each player takes a set of colored tile cards.  Each card has one to three shapes, each filled with one of three different fill types. Each possibility is used once in each set giving each player 27 base cards plus two wild cards for a total of 29 cards.

The color of the cards indicate which of the four players laid the card and is used for scoring at the end of the game based on placement. During play the color is not a determining factor when matching with an adjacent card; number, shape and fill types is what matters.

Each player shuffles their tile set and places it face down in front of themselves.  They select the top 5 tiles to take into their hand. A starting tile, a wild with no teams specific color, is placed in the center of the play area and play starts.

On a players turn they must place one of the five tiles from their hand adjacent to at least one of the tiles in the play area if possible, otherwise they discard a tile from their hand which is now out of the game permanently. In order to play adjacent to a tile that is in play, the items on the tile must match two of the three features (number, shape or fill type) of the adjacent tile. Remember that color doesn’t matter.

The player then replenishes their hand by selecting the top card in their face down pile, and play goes to the next player. Play continues until all players have played or discarded all of the tiles from their set at which time the game ends and the final scores are calculated.

You can see in the above example that a well placed purple empty circle, as a block move, saved a lot of points from being added to Red’s final score.

Clustered is a pretty simple game to learn to play as the rules are easy to read and well worded. The game itself takes virtually no time to set up and can hit the table quickly. The ease of entry for Clustered is a strong point.

The concept of play is something most people will grasp quickly. The game moves quickly with each player getting their turns in pretty fast.  Our first game we spent more time trying to build our own patterns while in later games the focus turned to blocking our opponents.  The game can be played both ways which is great for those who aren’t big into sabotaging other players.

The game’s suggested play time and age range are definitely appropriate. This game was a big hit with my 9 year old son who enjoyed the strategy and style.  People are often looking for solo games and Cluster works okay in a solitaire setting.

The components that were sent were definitely prototype. I am hoping that the final product will be much higher quality. I also hope that something will be done to make the game more visually appealing (and maybe it will). To me Clustered feels a little institutional at the current state (something a school might have on it’s shelves), as opposed to something I would be excited to bring out with some friends over for dinner. Maybe a theme added in could help liven it up.

I think that Clustered is a pretty fun filler game. While there is some strategy and thinking involved it isn’t so much that it is hard to learn and games drag out.  At the pricing initially shown in the Kickstarter preview, I think it is a game that could be part of many gamer’s collections.

As stated above I had a prototype of the game and am hoping that the components will be better quality in the final product. Also, I think that some window dressing could be added with some Kickstarter stretch goals if possible.

I would think this could be a diverse piece to add to someones collection. It feels a little like dominoes or card matching games and yet has a little more depth and strategy. Like I said earlier, for the price, I’d add it to my game room.

I am giving Clustered 6.5 out of 10 super meeples.

Check out Clustered on: