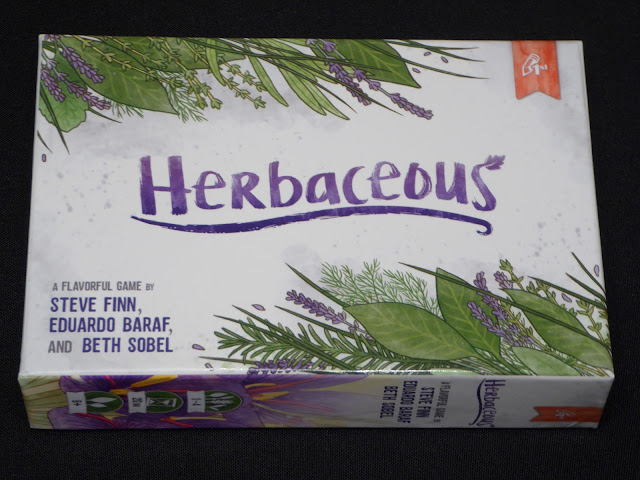 “Gardening is cheaper than therapy and you get tomatoes“.
~Author Unknown

In Herbaceous players are trying to pot the best collection of herbs by collecting sets from both their personal gardens and the community garden. The player to do this the best over several rounds will be crowned King of the Green Thumbs!

To set up Herbaceous each player takes four Container cards and the Garden Marker in the color of their choice and sets them in front of them. Players then shuffle the Herb cards (removing some for games with less than four players) and places the deck face down with in reach of all the players. Lastly the Herb Biscuit card is placed face up near the Herb deck.

On a player’s turn she will take the following actions:

1) Pot Herbs. To pot herbs she will decide which container to use then take a set of cards from her private garden, community garden or a combination of both to place under the container card. Note: each container can only be filled once and players may only pot one container per turn.

Potting herbs is an optional action for players to take but is done before the Plant action.

Play continues clockwise with each player taking the same two actions each turn. The game ends after the Herb deck is exhausted and players can not pot anymore herbs. Points are scored based on how full each container is and any bonus points earned for special herbs potted in the glass jar. The player with the most points wins.

I failed to mention above that if a player is the first to pot all three different special herbs in the glass jar they receive the Herb Biscuit which earns them 5 bonus points at the end of the game.

There are two team play variants where during the planting phase of the game a player will plant in his private garden, the community garden and his teammates private garden. At the end of the game the two teammates combine their score with the highest team total winning. The second team variant takes away the player’s ability to talk with their teammates and the winning team is determined by comparing the two team’s lowest individual score with the higher of the two winning.

The final variant is a solo variant where there is a slightly different set up and again the player will be planting in three different areas this time however the third place is a discard pile. Also if the community garden reaches five cards those cards are immediately discarded. Once the final score is tallied the player compares his score to a chart to see how well he did.

Lastly my review copy also came with the Flavor Pack mini expansion which adds three action cards that when drawn from the Herb deck causes each player to take the action indicated on the card.

Herbaceous was a big surprise to me. First I didn’t know I was getting a review copy and second I didn’t know a lot about the game. I had heard about it but never gave it much attention which is strange since it had been getting some pretty good buzz leading up to the release as Kickstarter backers were receiving their copies.

This is a light set collecting game that has a pretty cool mechanic which is drawing a single card deciding where to play it then being forced to draw and play a second card in the spot not previously selected. This creates interesting decisions throughout the game as you are sometimes forced to help your opponents out. There is also a very light press your luck aspect as you decide how many cards to try and collect before potting since you never know when someone else will take an herb from the community garden that you may have needed for one of your sets. Each container gives a different amount of points based on how many herbs you have potted in them so losing out on a couple cards for a set can be the difference between winning and losing. For example in the large pot a player will earn 2 points for 1 card, 6 for 2, 10 for 3, 14 for 4, 18 for 5, 20 for 6, and 22 for 7, so the difference between potting 4 cards and 6 cards is 6 points which is huge in this game.

The artwork is absolutely stunning which I have come to expect from Beth Sobel who worked on other amazing projects like Lanterns and Between Two Cities. The components are all top of the line which matches up with all the other games I have played from Pencil First.

Herbaceous is solid through and through. The game plays smoothly and quickly with minimal down time. Most of our games took the specified 20 minutes or less. It is accessible to players of all ages, the 8+ recommendation is probably a good mark. While not being a deep and strategic game, Herbaceous offers plenty of good choices for players to mull over.

This game also offers a nice break from the mainstream themes that have become so prevalent; fantasy, zombies, pirates, and Cthulhu. And it fits well with games like Lanterns and Patchwork, both of which are tearing it up in the gaming industry.

I love that so many games are including variants these days specifically solo variants, and Pencil First has done a great job with the ones they have added to Herbaceous. The expert team play is very challenging and rewarding at the same time.

There isn’t much bad to be said here. There will probably be some gamers that don’t like the theme or light nature of the game, but hey not all games are for all players.

Players who like set collecting games and lighter themes will love this game while  most other players will enjoy playing this one in between other games.

I am giving Herbaceous 7.5 out of 10 super meeples.

Check out Herbaceous on: