Gentleman’s Deal is a game where players work to payoff their partners for shady deals so that those same partners don’t turn them into the authorities, because not many of us are good at making money while locked in a jail cell.

The game starts with the first player taking a card that depicts the loot to be shared from a recent heist. The loot includes a cash amount between 12 and 16 (dollars/rubles/yen, whatever you want to call them.) As well as three accomplices who come with the deal. The accomplices are shown as symbols, and having them helps in later rounds. I will explain what each accomplice does later in the review.

The first player, while keeping the loot card secret, offers the other players cuts of the deal as he or she sees fit. The goal is to satisfy the players so that they will vote FOR the deal. In our six player game the player offered three players 3$ each and offered two players 1$ and one accomplice each.  Everything left over in an accepted offer would be for the player trying to make the deal.

After the player has made an offer, the other players are allowed to make a counter offer, and then the original player must make a “Final Offer.” At this point all of the players (besides the player making the deal) get to vote on the deal. This is done by players deciding how many votes they will use (different cards and tokens can be used to add up to 5 total votes for a player). Players hold out their fists and then on the count of three indicate how many votes with their thumbs up for an approval vote, or thumbs down for a rejection vote. Remember since it is a vote, you don’t have to make everyone happy, just enough to get the vote through.

If the deal is approved, then all players get their offers and the player making the deal gets everything else. If the deal doesn’t go through then nobody gets anything and the one setting up the deal goes to jail. The player in jail has no votes in the next round (and likely doesn’t get offered anything by the next player making a deal). Play goes around the table (once or twice depending on the number of players).  After all players have taken their turn(s), the player with the most money is the winner.

There are a few rules to add to the overall play listed above. 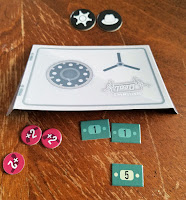 -If you are offered nothing in a round and the offer is accepted, You get a Gang Card. This card gives you +1 to your vote in the next round.

-There is a cover screen so you can keep the money you have and chits secret.

-Accomplices also have a token with their symbol on them so that during an offer, they don’t leave their current owner until the deal is done.

And, let’s meet the accomplices and what they do (the reasoning for their attributes is pretty fun to read in the rule book).

-Sheriff: Two extra $ when the deal maker goes to prison.

-Senator: Argument chits give you +4 to your vote.

-Tycoon: One Extra $ every time a deal is accepted.

-Journalist: An extra $ for each argument chit played by you and each of the

players sitting next to you.

-Boss: If the Boss votes for the deal to be accepted, the offerer gets an extra Gang Card.

-Banker: You get a $ from each of the players sitting next to you who get loot when a deal is accepted.

Rules and Setup:
The rules are pretty straight forward and quick to teach everyone.  The hardest thing during the game was knowing what the accomplices actually did. The token that represented the accomplices doesn’t have that info on it, and players are constantly looking for the rule book or the reference table to try and determine what they are being offered.

Setup however is simple and quick.

Artwork and Components:
I liked the artwork. The pictures support the shady business theme of the game.  They are also printed to the edges which is always a nice feature.  The tokens and money were thick cardboard and the card stock was of good quality.

The Good:
I loved the aspect of trying to work a deal that leaves you in the best position. This is a game that includes a lot of players (5-9) and trying to make just enough players happy to give you enough votes was the key to the game. In our couple of games, the player who was outright greedy always got burned and the player who sat back and watched it all happen tended to do well. It throws the conventional greedy game on it’s head.

The Bad:
The game finished very poorly. Since the last player is trying to make a deal that includes accomplices (who have no value when there is no next round), leaves very little for the deal maker to work with. This is even true for the player before the last player who’s accomplices are guaranteed to only be good for the last round. In talking with the publisher, this is a known issue that they are working on fixing in the near future. I did play test one of their fixes (make each accomplice worth an extra $ for the last round), and I found it helped, but wasn’t quite a balanced solution.

Final Thoughts:
This game is good except for the major flaw at the end which is soon to be worked out (I hope). The rating below is for this version, but you can trust that it could raise a full 2 super meeples with a reworking of the end.

Players Who Like:
If you like mafia style games and bartering games, this is one to pick up.

I am giving Gentleman’s Deal 6 out of 10 super meeples.

Check out Gentleman’s Deal on: