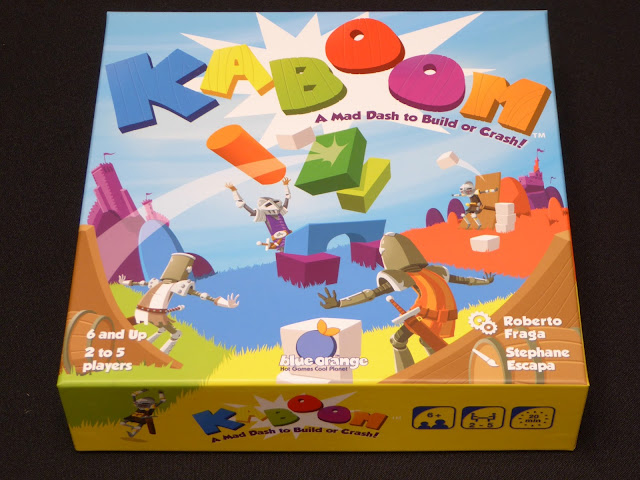 Well Kaboom, from Blue Orange Games, takes that concept to a whole new level. In this game a player will be trying to construct towers out of wooden blocks while the other players are trying to knock them down. The tag line says it best, “A Mad Dash to Build or Crash!” The player who can build most successfully will be the winner.

To set up Kaboom players will take the Mega Tower tile and place it in the center of play. They will then take the remaining Small Tower tiles and arrange them randomly around the Mega Tower. See set up picture below. Players then each take a catapult of their choice along with two Wooden Ammunition cubes. All the building blocks are placed near the playing area along with the sand timer. You are now ready to go.

The youngest player takes on the role of Master Builder first and will take all of the building blocks and the sand timer and place them in front of her. The other players will prepare their catapults and Ammunition cubes. When ready the Master Builder will turn over the sand timer and begin to build on any Tower tile she wishes building the matching structure as the tile shows. See examples below. While the Master Builder attempts to build the towers the other players, or Saboteurs, can use their catapults and Ammunition cubes to try and knock down the Master Builder’s towers. The caveat being that they only have the two cubes to fire, so they must use them wisely.

Once the timer has run out the Master Builder must quit building and the Saboteurs must quit firing. If any towers are still standing the Master builder may take the accompanying Tower tile beneath it to score at the end of the game. The role of Master Builder now passes clockwise to the next player.

The game ends after a certain number of  pre-determined rounds at which time players will count up the points on their Tower tiles. The player with the most points wins. But wait! There is one other way to win and that is if the Master Builder constructs the Mega Tower successfully which also ends the game and that player wins.

As a father of four young boys I love Blue Orange’s line of games for younger kids. They are entertaining and engaging without being more of the same old thing—roll and move. In fact most of the games that I have received have been either speed style games or dexterity games like Top That and Dr. Eureka. Well Kaboom is another great dexterity game that is both entertaining and engaging.

This game is so simple to learn, teach and play that kids can grab this one off the shelf and play by themselves. It sets up in minutes and only lasts about 20-30 minutes depending on how many rounds are played. There is no down time for players as no matter who’s turn it is you are always involved as either the Master Builder or Saboteur.

Although there is not much artwork in Kaboom, what is there is fantastic. It has the light and playful feel you would expect for a game aimed at younger audiences. I love the knights on the catapults that look like they are actually throwing the Ammunition cubes. The tower blocks, cubes, and tiles are all really great quality and seem like they will hold up through the onslaught of the rigorous game play.

I had a blast watching my boys play this game with their older cousins (14 and 12). Although they are not as coordinated or quick as their cousins they still seemed to have fun building and smashing towers. I was nervous at first because my 7 year-old can get really frustrated when he is not successful at what he is doing and I thought his towers getting knocked down would really bother him. To my great surprise he thought it was hilarious and was laughing most of the time as you can tell from the pictures below. 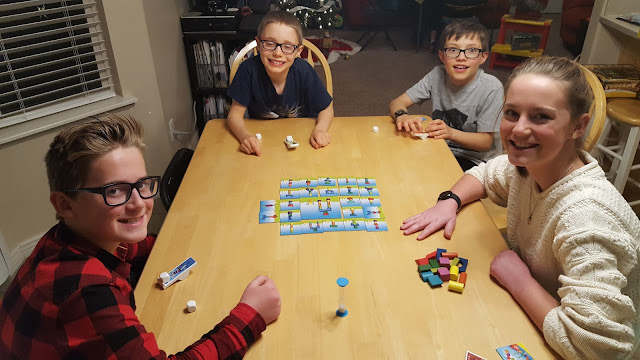 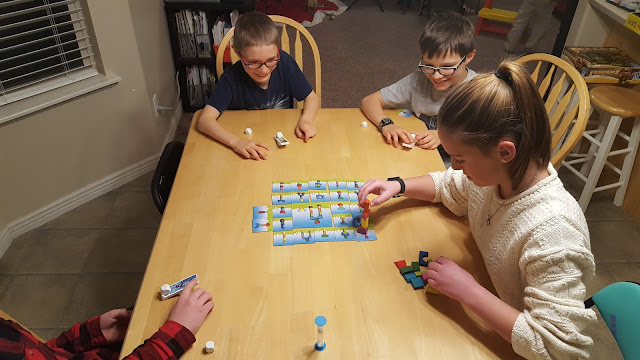 Kaboom is awesome fun for the whole family—young or old. I can’t recommend this game enough for families or gaming groups looking for a lighthearted filler game full of laughs.

Players who enjoyed Dr. Eureka and Top That or other dexterity games will love Kaboom.

Check out Kaboom on: