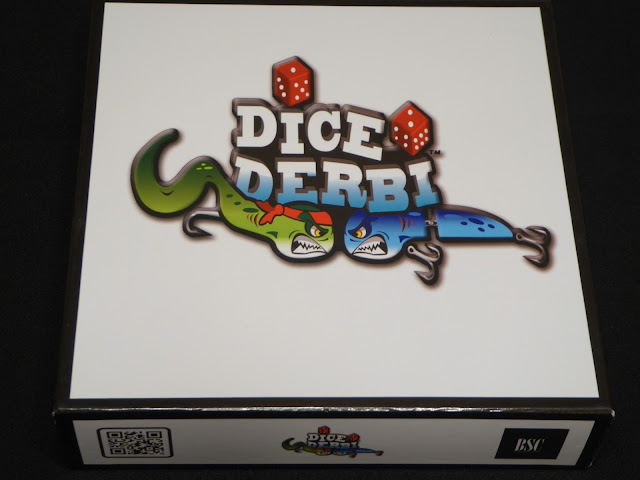 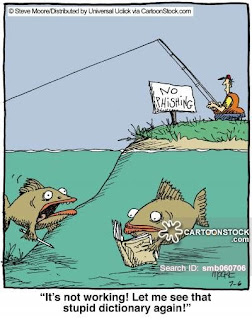 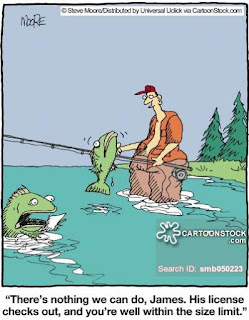 “A fishing tournament, or derby, is an organised competition among anglers. Fishing tournaments typically take place as a series of competitive events around or on a clearly defined body of water with specific rules applying to each event.” Thank you Wikipedia.

And a couple from me:
Team = One or more players working together
Honey Hole = Bulls-eye

The object of Dice Derbi is to score the most points by casting lures across a table onto the lake and into the scoring zones. The team that does this the best over 10 rounds is the winner.

To set up Dice Derbi players take the Lake boards and place them on separate ends of a table (about 5-6 feet from one another is recommended). Then each team takes a set of lures of a certain color/type. Lastly the score pad and pencil are placed nearby.

For the advanced game, or Derbi Mode, the card mat is placed in the center of play and off to one side (out of the way) along with the four types of bonus cards which are shuffled and placed in their respective slots on the mat.

On a team’s turn they will cast one lure down the table to the lake. The object being to get the lure to land in the scoring zones (Sandbar, Drop-off, and Honey Hole) which each have different scoring multipliers. Teams alternate casting lures until all lures have been cast at which point the round is scored. Teams score points for each lure in one of the scoring zones equal to the number on the lure multiplied by the scoring zone multiplier. For example in the image below the green team has cast their five lures; two have landed outside the scoring zone in the Weed-bed and thus get zero points, two lures (a 6 & 1) have landed in the Sandbar which has a multiplier of 1 so they score 7, and finally one lure (a 4) has landed in the Drop-off  which has a multiplier of 3 and thus scores 12. Therefor the green team’s score would be 7 + 12 = 19. The orange team would score 9 from the Sandbar and 10 from the Honey Hole for a total 19 also.

Play continues for ten rounds at which time the team with the most points wins!

For the advance play Bonus cards are introduced which are gained each time a team roles a 1 (aka the mascot). Then depending on the area where that dice is the team will take the corresponding Bonus card. For example if the team had rolled the 1 in the Drop-off they would take a Drop-off Bonus card. These cards are played immediately or over the course of the game and can either help or hinder a team. See some example cards below.

The advance game ends when one team reaches 200 points!

Dexterity games are fast becoming a hit with my family and I, so when Dice Derbi came out I immediately contacted Bryce to do a review. And besides who doesn’t love the idea of combining fishing and board games? So how does it play?

Dice Derbi is a crazy combination of darts, horseshoes, and bowling as you are rolling the dice down the table trying to hit the “target” which in this case is the Honey Hole. The closer to the Honey Hole you get the more points you get. You can even take the opposing team out of scoring by knocking their lures out of the scoring zones. Thus going last (or being in the Anchor position) can be a good thing.

Each round moves pretty quickly as teams are only casting five lures each. The only down time comes during scoring, but it doesn’t take long once you get the hang of it. The game specifies play lasts ten rounds, however players can change this to increase or decrease the length of the game. Same applies to Derbi Mode where the point total can be adjusted.

The theme of a fishing derby really melds well with the mechanics here. It really feels like I am trying to cast my lure in just the right spot to catch the biggest fish. All of the mechanics from rolling the dice to the Bonus cards really carries the theme throughout. You can tell that Bryce enjoys fishing and has been doing it for a while now. Even the way the weight of fish is determined is cleaver and fits so well. Players take the number on the face of the dice and multiply that by the multiplier of the area the lure is in and that equals the weight of the fish.

Having the two versions of the game is a huge plus. Out of the box the game is easy to get into and is really laid back. As I have mentioned it really feels like a game of darts or horseshoes. Adding the bonus cards in for Derbi Mode ads a few more rules but also ads a lot of fun. Cards range from getting bonus weight added to your total because a fish jumped in your boat to special bonuses for Snagging the Lunker Log on your cast.

At first glance consumers may pass Dice Derbi up as the cover art is a little underwhelming. With so much artwork to choose from something could have been done to make it pop a lot more. That being said the artwork inside the box is fun, playful and fits well the overall theme. The different lure characters add to the personality of the game.

This is one of the heavier (weight-wise) games that I have received to review. Upon opening the box you soon see why. The two Lake boards are heavy duty, there are a lot of Bonus cards which are solid, the scoring pad is thick, and there were a lot of dice (the ten orange and red dice that come with the base game and two limited edition packs which were sent as a bonus). The custom dice are what stands out here with the fun lure logos engraved on each dice.

As I mention above the custom dice with the special lure characters and funky colors are a lot of fun but don’t amount to much. Kind of like that really fancy bowling ball you see that one guy carrying around at the bowling alley. I think if the different characters could get special bonuses in certain circumstances it would make buying the limited edition dice even more tempting.

Dice Derbi is great for all ages and will appeal to a wide range of consumers, not just gamers. My entire family really enjoyed this one and I was even able to get my 4 year-old playing. The age recommendation on the box says 13+ however I can see that being more like 8+ as long as those playing can do math and read. 🙂 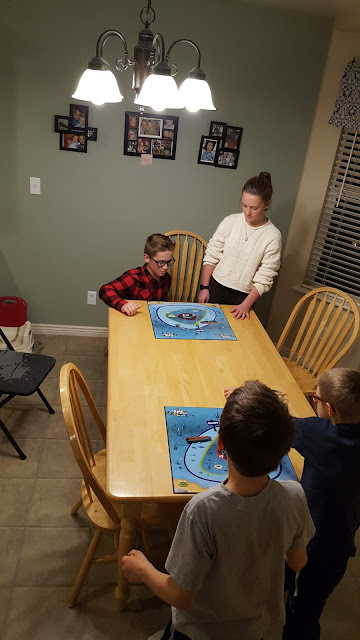 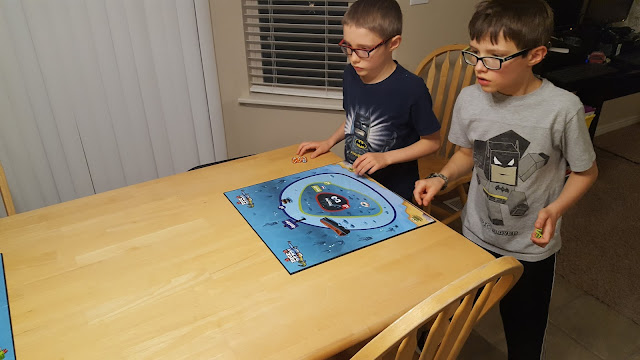 Dice Derbi is a must have for those who love fishing, horseshoes, darts, and board games. Or pretty much anyone.

I am giving Dice Derbi 8 out of 10 super meeples.

Check out Dice Derbi on: