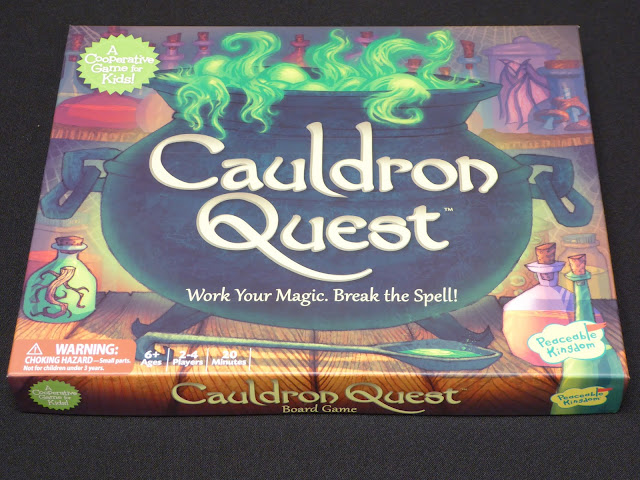 An evil spell has been cast over the realm and it is up to you and your fellow wizards to brew a magical potion to counter it. Beware you will have to find all the ingredients and avoid the evil wizard in order to be successful.

To set up Cauldron Quest players place the board in the center of play along with the two sets of dice (the Action dice and Magic dice) and the Spell Breaker Token. Players then randomly choose three cauldron ingredients to place in the center of the board on the cauldron space removing the remainder from play. The six Potion Bottles are then shuffled with the ingredient image face down and one bottle is placed on each of the six starting spaces around the outside of the board (see image below). The Path Blocking tokens are then placed near the board face down and shuffled. Lastly the Wizard Hat token is placed on the Wizard track in it’s starting position.

On a player’s turn he will roll the Action dice. There are four possible outcomes:

Note: Once per game player’s can use the Spell Breaker token to remove one Path Blocking token which is reshuffled with the others not in play.
The game ends when either all paths to the cauldron are blocked in which case the Evil Wizard wins OR the players successfully get all three Potion Bottles (that match the ingredients) to the Cauldron.

Cauldron Quest is a great game that teaches kids the basics of cooperative game play. It has simple mechanics which allows kids to play on their own and choices that will have them working together to find the best solution. The theme is super appealing to the target age group and the game play is a great complement to that.

Cauldron Quest also teaches kids some basic math skills like addition and knowing even and odd numbers. Both of which were good for my 4 year-old to learn and for my older boys to review.

The artwork is really fun and works well with the theme. The board has the feel of being a wizard’s tower while all the Ingredient tokens are your classic potion ingredients like Toad, Mushroom, Bat Wing, and Eye of Newt. The components are solid with thick tokens, plastic Potion Bottles and custom engraved Action dice. At some point I may upgrade by getting a wizard figure to replace the hat. 🙂

I received both Race for the Treasure and Cauldron Quest at the same time, both of which are cooperative games for kids, and I would have to say that Cauldron Quest worked much better for us. The game is not so simple that it plays itself and it isn’t too difficult that my 4 year-old wasn’t able to play along with us. All three of my boys (4, 7, and 9) really enjoyed it and had fun playing it. I imagine at some point we will out grow it, but for now it will go into our collection.

Parents looking for a game to get their kids into cooperative gaming with some educational value will love Cauldron Quest. Check it out on Amazon by clicking the link below.

I am giving Cauldron Quest 7 out of 10 super kid meeples.

Check out Cauldron Quest and Peaceable Kingdom on: