WARNING: This is a preview of Argle Bargle. All components and rules are prototype and subject to change.

Argle Bargle is a funny name for a game so, I went searching for this word on the internet and found that the late United States Supreme Court Justice, Antonin Scalia used these words in a dissent opinion in 2015. So if you’re looking for other fun game names try some of his other dissent phrases: “jiggery-pokery,” “pure applesauce,” “tutti-fruity,”or “ask the nearest hippie,” but I digress. What Scalia was trying to say with Argle Bargle, according to google is: copious but meaningless talk or writing; nonsense. Which turns out to be an appropriate name for this game.


In Argle Bargle players use the words on their cards to create insults to be flung at other players in order to reduce their “lives” until they are the only insult flinging player left.


The game really is simple to learn and play. To start each player is dealt five glass tokens representing five lives, and ten cards. The rest of the cards are placed in a draw pile in the middle of the table.


Each card has two words/phrases on them and you can use one of them to develop an insult, and each word/phrase has a point value (some easy words are worth zero while harder phrases have higher point values). On their turn a player can either trade in as many of their cards for new cards as they want or play an insult and direct it at another player.

For example, I was able to combine eight cards to say: “Derek, YOUR NASTY LOVER LOOKS LIKE A TWISTED STUMP FOOT”

The insults may not be perfectly what you’d like to say, but you have to use the cards you have. This insult was worth 0+1+3+1+0+1+2+1 = 9 Points. Since insults hurt, Derek would lose some of his life points. Five or more points costs the insulted player one life, ten or more is two lives and fifteen or more costs the player three lives AND the insulting player takes one of those lives for their own.


There are also three special play cards. If Derek has a REDIRECT in his hand, he can play it after my insult and send the insult to another player, so now Dane has a nasty, ugly lover. If Derek has a REVERSAL in his hand, I now have a nasty, ugly lover. The last special play card is a Boom card. If you add this card to the end of your insult Derek can’t redirect or reverse the insult.


Each player insults others in turn order, and a player is out of the game when they have no lives left. The final player with lives wins.

NOTE: Derek Maggs is also a reviewer of the Everything Board Games Network and you can read his review of Argle Bargle on the Australian Tabletop Game Network.

Rules and Setup:
Simple, Simple, Simple.  This leaves it as a great party game since you can be playing in five minutes.

Theme and Mechanics:
The style of the game is not one I tend to be drawn to. This game is definitely a PG version of an insult game, but the web site appears to have other, future versions that might be a little more R rated. This one didn’t bother me much, but you could certainly see where this could get out of hand quickly.

Mechanics were simple enough. It’s a little bit of a Scrabble set up where you have to create something with what you have. The fact that there are two words/phrases on each card adds a little complexity to the thought process.

Game Play:
The game rolls along pretty quick. I could see this turning into the seriousness of a Scrabble game where you spend a ton of time trying to create the best phrase to get the best score, but I don’t think that is what this game is supposed to become. If you play to have fun, then the 15-30 minutes is probably a good time frame estimate.

Artwork and Components:
The presentation of the prototype was impressive. I think this is the first time where the prototype might be nicer than the final product. I mean check out this box: 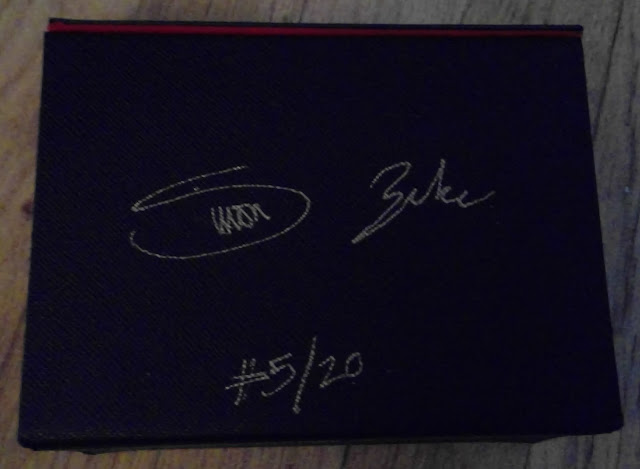 The components in the box were nice quality cards and counters.

The Bad:
This genre of insult games really appeals to some, I’m not one of them. There are a lot of options when it comes to these types of games. I did appreciate that this was not as crude and vulgar as some, so it is great option if you want something that is this style.

Final Thoughts:
I think there is a place for this game in the market. It can be played easily and quickly and break the ice for some types of groups. It isn’t meant to be a serious, cut throat type game and likely appeals to a lighter game crowd who doesn’t mind the insulting component.

Players Who Like:
Obviously, Cards Against Humanity is the king of this genre, but if you are looking for a more family friendly style game, this might be for you.

I am giving Argle Bargle 7 out of 10 super meeples.

Check out Argle Bargle on:

Argle Bargle is on Kickstarted between now and February 16, 2017.