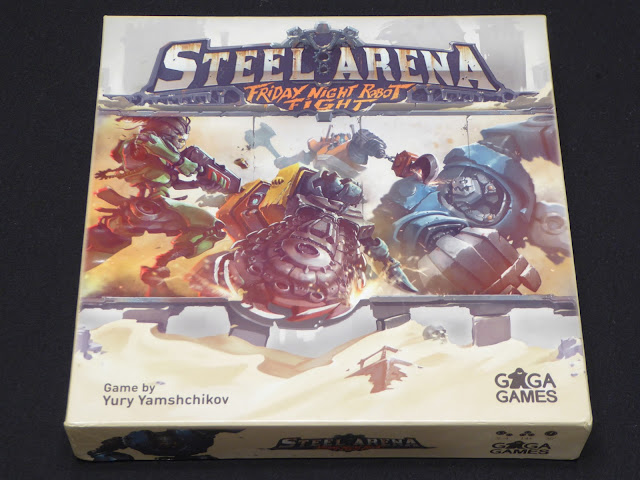 Let’s get ready to rumble………..! Grab your Quasar, Cuckoo, O.R.C., Flea, and Crab it is Friday night and time to fight.

In Steel Arena players will be taking on the role of robots who gather every week to battle. The objective is simple, be the first robot fighter to earn 10 victory points or the last one standing. Victory points are earned by damaging your opponent’s or by upgrading your robot.

On a player’s turn he will do one of two things during the first phase; activate one Module or cool down all Modules that have Overheat tokens on them. To activate a Module he will place a Overheat token on the Module he wants to activate and then resolve it’s action. As mentioned above there are four types of Modules: turn, move, attack, and defense.

Once a player has taken his action he will enter the Upkeep phase where he will add the Module tile he ended his turn on (if it is a Module and not a Terrain tile), switch his robot back to Normal mode if his robot contains over five Modules (including Robot board itself), discard all Overheat tokens on auto cool Modules, replace empty spots in the field of play with Generation III Module tiles from the draw pile, and lastly switch their Robot board to Forced mode if there is five or less Modules on his robot including the Robot board itself.

Note: A player may only have twelve total Modules on their robot at a time.

As mentioned at the beginning of this overview, players will receive victory points whenever they are able to damage an opponent’s robot. Damage occurs when any attacks are not deflected/absorbed by the opponent’s defensive Modules. Damage is tracked by the defending robot losing a Module(s) of the owner’s choice. The Module(s) is then given to the attacker as victory points. The other way to earn victory points is by upgrading your robot past the twelve Module limit. Once at twelve Modules a player must remove a Module before adding a new one. The old one then goes into the player’s victory point pile.

Once a player has finished his turn the next player will take her turn in the same manner. This will continue until one player has reached ten victory points or the other robots are completely destroyed or players can no longer draw Generation III Module tiles to fill the empty spaces on the field of play at which time the player with the most victory points wins (or the last standing robot).

This is my fifth GaGa Games title that I have had the pleasure of reviewing and as with most their other games, Steel Arena is awesome. Game play is fast and furious and a whole lot of robot smashing fun!

This one took me a bit longer to figure out and set up, however once we got going the game was fairly easy to play and fast paced. Players turns are boiled down to two phases, phase one which is taking an action or cooling down then phase two which is doing the upkeep. Although the turn sequence and actions a player takes on their turn is not complex, deciding what to do with the action can be meaningful and ultimately impact the outcome of the game. These decisions can include weather or not to try and take an action opposed to cooling down, standing and fighting over moving into position to gain another Module, and many others.

I really enjoyed the flow and speed of Steel Arena as each player’s turn is relatively short. There is no down time as you are constantly watching your opponent’s move and planning your next move. The robots start out pretty basic only being able to move short distances, turn a small amount, inflict minimal damage and deflect damage from one direction. As the game progresses your robot gets stronger, faster, and more maneuverable. Some of the Generation II and III Modules have auto cool symbols on them allowing you to spend more time taking actions and less time cooling down. Also there are Modules that allow you to activate a second Module on your turn or more depending on how you combo them together.

The artwork awesome, Konstantin Porubov did an amazing job bringing these battle bots to life. I also really enjoy the variety of Modules and the different actions they offer. Many of them are quit humorous as well. For example there is a weapon called Dorothy that rotates the target several times as well as inflicts damage. “There’s no place like home!”

The components are okay. As usual this is one of my only knocks against GaGa games. Their quality seems to be a little bit lower than some other publishers. For example the box cover had a couple bubbles, some of the Module tiles stuck causing the printing to come off during separation, and some of the overlay paper is peeling up from the card board tokens. These are minor complaints compared to how much I enjoyed the game play.

Steel Arena can be a bit luck heavy as the typical set up the field Module tiles require them to be placed face down so players don’t know what they are getting when they take one. That being said there is a variation where you can set up the field Module tiles face up so there is complete transparency. This makes for a more strategic and balanced game.

I am really hoping there will be some expansions for Steel Arena that add more Modules (possibly of different types), asymmetric robots with special powers (IE increased melee damage for the big robot or extra movement for smaller faster robots). I would also love to see miniatures here, the game is screaming for them!

All-in-all Steel Arena really scratches an itch for me. I enjoyed the simplicity of the game play along with the complexity of the choices. I like that the game moves quickly with limited down time. My 7 and 9 year-olds were able to easily pick this one up and they had a blast doing so. Unfortunately they were so busy getting each other they forgot about me. Insert evil laugh here. 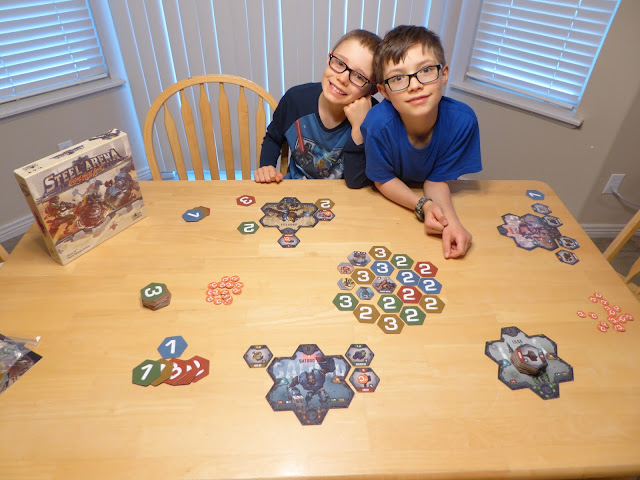 I highly recommend picking up a copy of Steel Arena for anyone who likes tactical war games or players looking for a quick and easy shoot em up game.

I am giving Steel Arena: Friday Night Robot Fight 7.5 out of 10 super meeples.