A new Red Dragon Inn themed game? Yes! It’ll be great. It’ll be funny. I want it now.
So, here we go.

Red Dragon Inn: Battle For Greyport is set in the Red Dragon Inn universe, but is not at all like any of the Red Dragon Inn games. Instead of getting drunk and gambling at the Inn after raiding our favorite dungeons, we find ourselves ambushed in town before we can even get started drinking. Now our intrepid adventures must use their actual battle abilities to confront a series of villains, and everyone must survive.

Red Dragon Inn is almost strictly a “take that” game. Battle For Greyport is a cooperative game in which you must all work together to take out the bad guys and survive to the end of the battle.


Red Dragon Inn is a casual, fun, sometimes brainless game that you can pull out almost anytime for an opening session of gaming or an end of the night, light cleanser. Battle For Greyport is not. It is not easy. It is not really casual. It is not brainless. It takes everybody working together very closely for you to win. But it is possible.

Gameplay:
This review would be 45 million pages long if I tried to describe every detail of the gameplay, but I’ll give you an overview. (There is a video here that is easier to understand).

Basically, some of the characters from Red Dragon Inn have made their way into this game. Dierdre the Priestess, Zot the WIzard, Gerki the Sneak, and Fiona the Volatile are all back for more fun.

At the beginning of the game, you will choose one character and take their starting deck (9 rather simple, not very powerful cards). You will also take their character card, which is a much better option. You will choose a scenario to play; each one has between 2 and 3 locations to save and usually a Boss villain to fight. You and your fellow adventurers must work your way through all of the encounters and survive in order to win the game. Sounds easy, right? Wrong. Very Wrong. 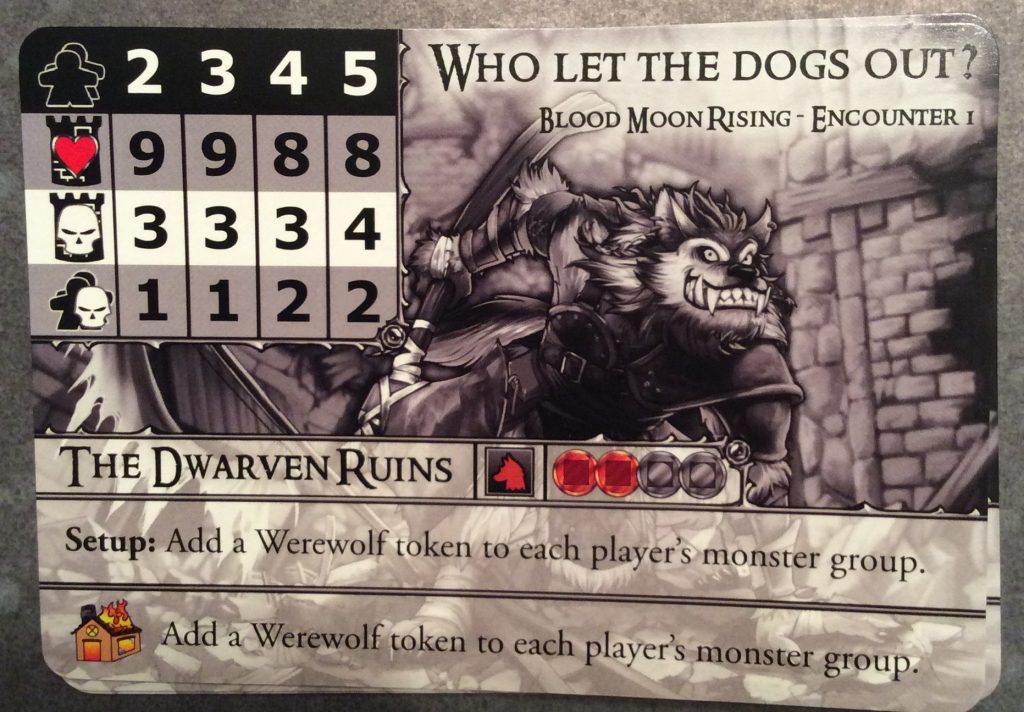 So basically you start by being overwhelmed by enemies and with less-than-stellar cards (yay).

Each round, everyone gets to act in any order the party sees fit. If Player 3 wants to attack first, cool. If Player 2 is dying to go first, okay. Any order is fine. But here’s the kicker: only one of the sets of enemies can be attacked each round. For every round, there is a Defending Player – this changes each round. The Monster cards that are in front of the Defending Player are the Active Monster and must be attacked first. 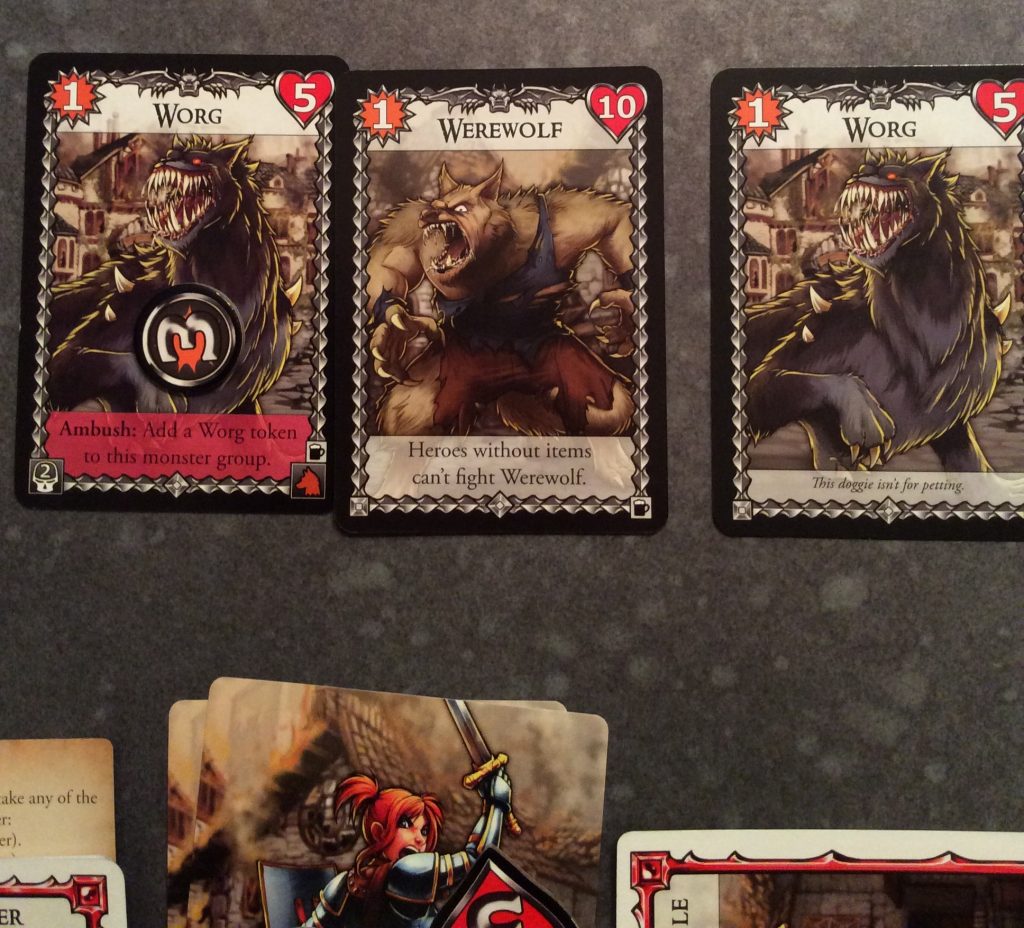 All of this actually works out though, because if all of the Monsters were active all of the time, the game would not last very long at all – everyone would die very quickly.

It’s not all bad news, though. After each round, the Defending Player gets to recruit a new Hero or Item from the Market, using gold, silver, or copper coins (presumably found in the last Dungeon you raided). 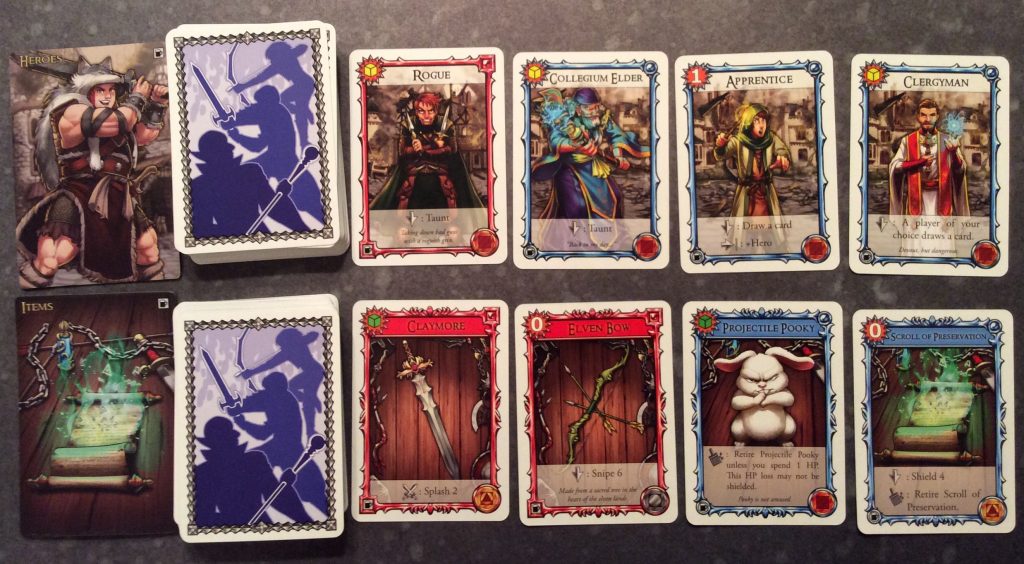 Plus you get to discard whatever cards you don’t need from your hand and refill back up to 5 cards and always keep your Character card. So after your turn at being the Defending Player, you feel much better about your situation, but you are the only one who does. No one else gets to recruit, and no one else gets to refill their hand. You must use what you have in your hand until you are the Defending Player again. (This part stinks). So it really takes working together to make it out alive. Planning and communication are key. No one gets to pull a Leeroy Jenkins.

If you manage to survive the First Encounter of the Scenario (which is usually pretty easy) you move on to the Second and then Final Encounters. They get much harder each time.

Like I said before, this is really just a quick version of how to play, but once you understand it, it becomes second nature and you are able to focus on strategy rather than always having to check to find out in what order things should happen next.

So what happened when we played?
Let me say that the first time we played it, it took us a little while to catch on. We were constantly flipping back through the rulebook to find out the next thing to do. But, we soon caught on and then it made the game a lot more enjoyable, but still not enough. We almost just quit and gave up on the game completely.

The scenarios are designed to be a real challenge, and in that they succeed. The introductory Scenario may actually be impossible to win. I found myself comparing it to the Introductory episode of Space Alert, which after you lost said something like, “So this is why you lost, right…Well now you know not to do that thing again.” (Not an actual quote, in case you were wondering). But this game didn’t tell us that, it just recommended starting with The Interrupted Party and so we did. And we got our butts kicked. Royally. It was extremely disheartening and really felt like there was absolutely no way to win; it was just too hard. I started looking at some of the forums and everyone seemed to agree, saying things like, “Has anyone actually won a game yet?” But then I came across a post that said to skip the First Scenario altogether. Move on to the others and try one of them.

And thank God we did, because this game is really really good, and really really well-designed.
Don’t get me wrong, it is incredibly hard still, and there were moments when if we had rolled badly or not stopped to consider all of our options, we would have lost. But we didn’t. We defeated the Werewolves and proceeded into the Inn for our much deserved Drinking Contest. 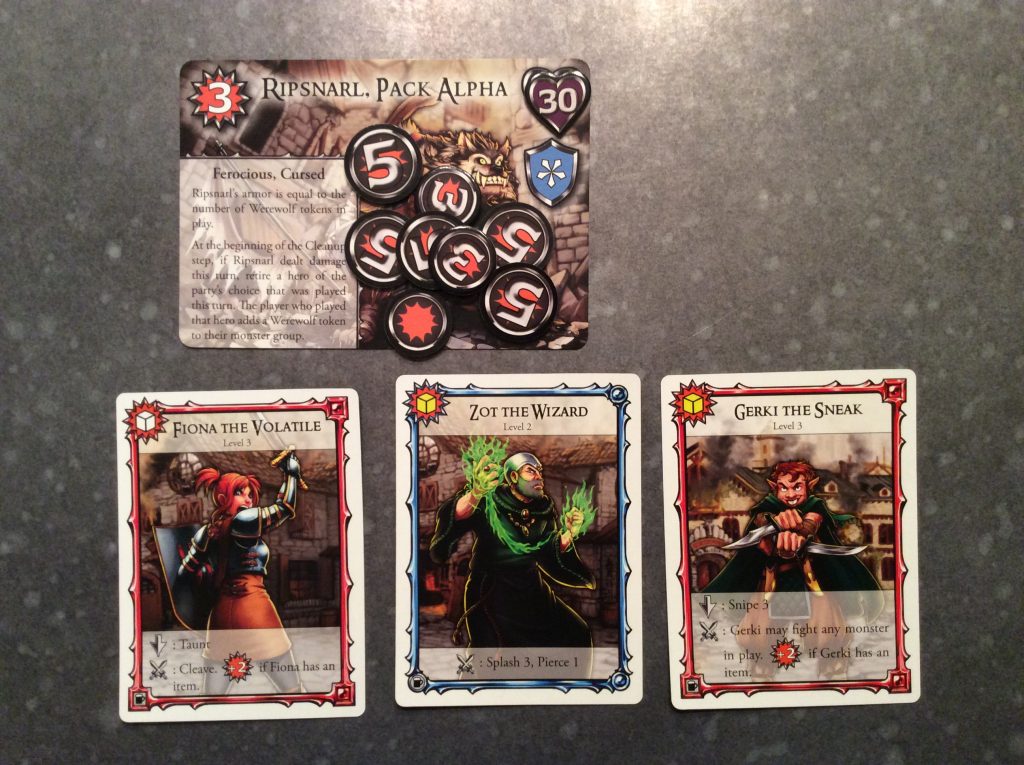 So…Thoughts?
So, first let’s get the obvious out of the way. This is not a Red Dragon Inn game. It has some of the same characters and artwork, both of which are fantastic, but it really feels like the Red Dragon Inn flavor is pasted on. You could have easily just set this game in any fantasy universe and had it turn out just fine. I was a little bit disappointed by this at first, because I really was expecting a new Red Dragon Inn game. Battle For Greyport does not have the humor that the original game possesses. But I really think that is okay; it doesn’t need it. The game is helped by the artwork, which I really feel is great and is the only real connection to the original series. But please don’t let the lack of RDI flavor lead you astray. There is a really good game in this box.

That being said – throw out the First Scenario. Skip it altogether. Burn it in a fire. Something. Just don’t expect to win. It’s nice as a teaching tool, but don’t let it crush your soul. It’s cursed. 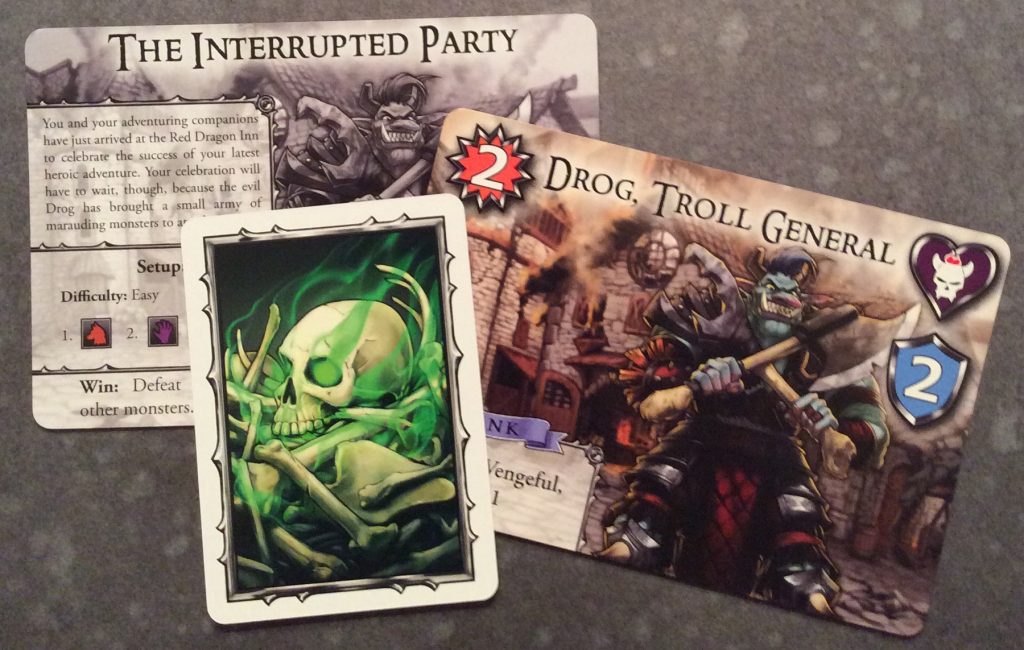 Move on to the Werewolves, they are just cool (everytime Ripsnarl does any damage to anyone he basically turns one of your party’s Heroes into a Werewolf).

So what about the mechanics? At first they seem a little restricting. Only the Defending Player is allowed to refill his hand. This seems harsh, but there are bunches of games that allow you to play cards off-turn and only refill your hand at the end of your specific turn, (so not unheard of). The only real difference is that everyone plays every round (or at least hopefully they do), so when you are all out of good cards, it is hard to make a real contribution. Luckily, you can use your Character every round, which balances this problem somewhat. But it still feels unbalanced until you start recruiting better Heroes and Items and making each round count for a lot more.

The Monsters only attack the Defending Player and the Location, which is really nice, because sometimes that is all you can survive. Plus eventually everyone gets cards with the Taunt ability on them, which enables you to move the Monsters cards around to be in front of different players at different times. This allows you to control who is going to get attacked each round, and for how many hit points. The Taunt ability also lets you draw Monsters away from the Location before it is destroyed, which usually gives you a pretty good bonus immediately.

The Recruiting mechanic is nice. At first I thought it was a bit underused, but having actually won one of the Scenarios, I think it is just about right.

The Components of Battle For Greyport are good. I think the cards will hold up and the artwork as I said before is really fun and a throwback to RDI. The box is fantastic. It is very sturdy and comes with plenty of room for expansions. It already comes with 5 Heroes to play and 10 Enemy decks to challenge you, as well as 7 Scenarios. When you first open it, you might think it looks a little sparse, but there is plenty of game in this box.

At first I was not sold on this game; in fact, completely the opposite. I was ready to pass it on to someone else. All of my friends who opened it together were skeptical, and after playing the First Scenario, even more so. But I am now completely convinced. A lot of effort went into this game. It is hard, and there will be people who balk at the difficulty and say, “No thanks!” But I also think that the gamers out there that enjoy a challenge will really enjoy this one.

It reminds me a lot of the Pathfinder card game, except much much more simple mechanically, and in that everyone is acting each round, which I really like. There is very little down time since everyone needs to be discussing and deciding which actions to take and when. It is also a little less luck-driven. There are a lot of Hero characters whose attacks are determined by dice rolls, but it never seems to take over the game and hinder someone who constantly rolls badly (me).

Overall, I am sold. It’s not going to be a game that I bring out all the time, but when we are looking for a challenge, and have a couple of hours to commit, this one will definitely make it to the table.
Ninja Approved!

Slugfest Games sent us a preview copy of Red Dragon Inn: Battle For Greyport as part of the Everything Board Games Network in exchange for an honest review, which is exactly what we gave.