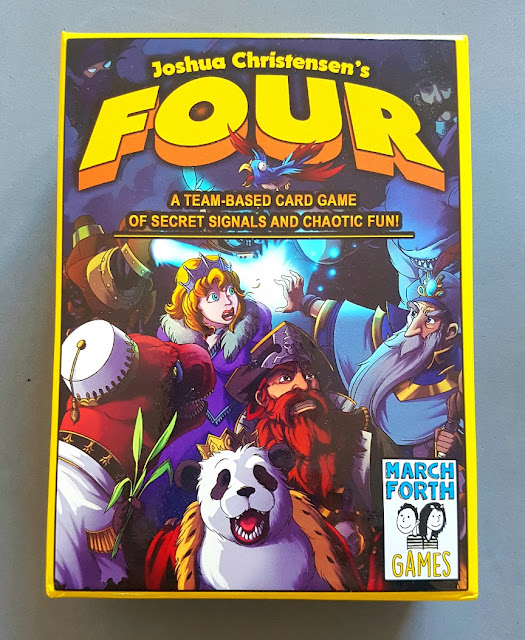 It is truly is amazing how small physical gestures can go unnoticed or mean so much. It is believed that more is said though nonverbal gestures but how many of these gestures go misunderstood or unnoticed? What if you knew you were looking for a nonverbal gesture as part of a code or communication between two people? Could you tell when a rub of the nose is simple just that or a code to tell someone you have achieved the directive. Only time will tell!

The Objective of Joshua Christensen’s Four is to collect four character cards of the same type. Once you have four of a kind you signal your partner to claim the victory point, the first team to four points wins!

So before the game starts, break into pairs (best played with 2-3 teams of two). Each team will separate themselves from the other teams and come up with a secret signal. It could be a word used in conversation or something as simple as rubbing your nose.

Step up for a basic game of Joshua Christensen’s Four is very easy:

Once the top two cards are on the table; you can start switching any of your cards for any of the cards on the table. To switch a card, you must put one of your cards face up on the table and grab the card you want. Remembering there are no turns, so you must be the first player to place your card down and pick up/or touch the card you wish to switch. If you do not want any of the cards in the center, you may say ‘pass’ if all players say ‘pass’ the two cards in the center are discarded and two new cards are turned over.

The only other rule in Joshua Christensen’s Four is claiming. Any player can claim at any point in the game, but once a claim is called all play stops immediately. Claims are broke up into three outcomes:

There are also advanced rules for Joshua Christensen’s Four, where all players are also dealt a Trash card and the powers on the cards are used. There are 4 types of character powers:

Other than these additional powers the game is played per the rules above rules.

Joshua Christensen’s Four brings back so many great childhood memories, sitting with my best mate and his two sisters playing Kent. This game feels so much like that game and then some. So when I got the chance to review this game, they were the only three people to call……. okay so only Brendan, my best mate was available, but still we got the team back together.

I am always a bit worried when I play something that is simple or reminds me of one of my childhood games. In the past I have played several ‘re-inventions’ or simpler games from my childhood and all but one has fallen short. This is most definitely not the case with Joshua Christensen’s Four. Elements like making no turns and having a free for all when the cards hit the table is amazing, especially with three teams, which turns the table into pandemonium. People throwing down cards and snatching new ones, sometimes even before you have a chance to pick up your desired card. Even if there were no advanced rules, I would have been super happy with this game. It brought back some great memories and also changed a few elements to make it more exciting.

The Advanced Rules is where this game truly shines. The special abilities really make you think and pushes this game to the next level. Being able to trash cards you know you opponent is going after or jumping into the lead on game two by using the reward cards. For me the Advanced Rules took this game from super fun to amazing.

Joshua Christensen’s Four is not only fun, it is stunningly weird too. I say weird because the characters are: Wizard, Ninja, Panda, Princess, Tyrant, Gentlemen, Shark, Robot & Pirate. How do they work or even go together? They really don’t but for some reason it gives the game a really fun and ludicrous feel to it that just works. I do really love the art of this game, the silliness is just great. The Tyrant is a Tyrannosaur Rex with a monocle in what looks like an officers dress uniform. The Ninja is upside down giving a peace sign. The panda is rocking a crown and robe while eating bamboo and the Shark has boxing gloves. The character choice and design is so ridiculous it just seems to work. I like that there is a more whimsical approach to the characters and game.

I don’t really have many complaints about Joshua Christensen’s Four, originally I thought the low card count could be an issue. As there are only four of each character; except the Gentlemen which has six. So I thought this could be a real issue when you are playing the advanced rules. You can trash a card and you are unable to win a game with that type of card, but then the wizard being able to transform helps balance the Trash effect. This really makes the Wizard valuable in the game. 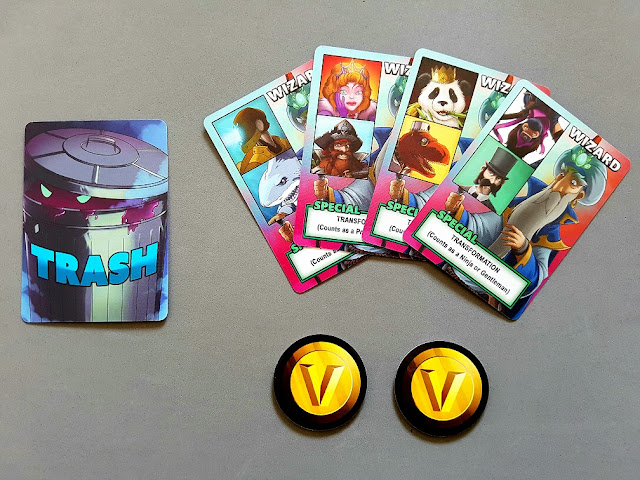 Joshua Christensen’s Four brought back so many memories of a beloved game from my childhood, then blew that memory out of the park. The quick & exciting gameplay; the whimsical and nonsensical artwork; and four hours of fun times and childlike pleasure. I just realized we played Four for four hours, such a weird coincident. This game truly is a fun, little take anywhere card game that is great for kids of all ages.

If you would like to pick up a copy of Joshua Christensen’s Four click this link (http://bit.ly/2fEE4uE), and why not pick up their expansion as well. Coz who wouldn’t want seven more characters including a unicorn with a broadsword?