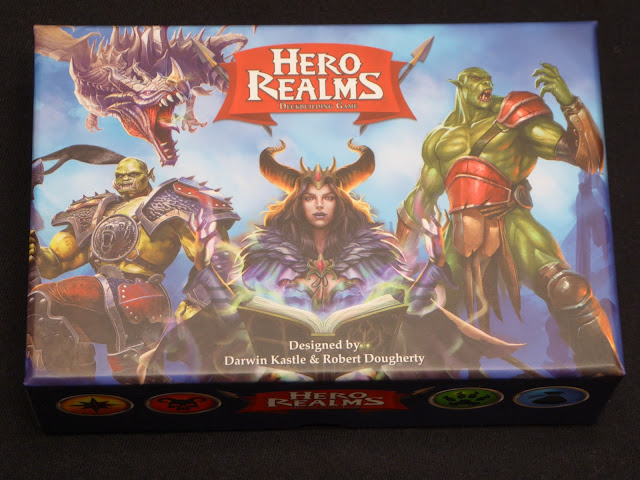 Welcome hero, the Empire is at war and you have been chosen to unify and bring peace to all the realms. Gather champions to your cause and outwit your opponents and you will be the Hero of the Realms.

In Hero Realms each player will start with a basic deck of cards which they will add to over the course of the game in order to become more powerful and destroy their opponent.

If you are familiar with Star Realms you can probably skip the set up and game play and go directly to the review. There are some differences which I will explain in that section.

There are a couple different ways to set up Hero Realms and we will be taking a look at both starting with the base game then exploring the character expansion packs.

To set up the base game each player will take two Health-Tracking Cards of the same color and set them to fifty (see the set up image below). Then each player will take a starting deck of ten cards, shuffle them, and place them face down next to their scoring cards. These cards consist of seven Gold, one Ruby, one Dagger and one Short Sword. Players then shuffle the Market Cards and draw five cards placing them face up in the Market next to the deck. Finally the sixteen Fire Gem Cards are placed face up at the end of the Market.

Once the game is set up the starting player draws three cards from her deck and all other players draw five cards from their decks. On a player’s turn she will play the cards from her hand which may include gold, actions, and champions. Gold is used for buying cards from the Market, actions are used for their primary ability (and secondary if ally cards are present), and champions are put into play for later use. During her turn she may also activate any champions that are already in play. At the conclusion of her turn she will discard the played cards (champions stay in play) and draw back up to five cards in her hand.

In a typical two player game the game ends when one player has reduced their opponent’s health to zero.

In addition to the base game I was also lucky enough to receive five character packs; Cleric, Thief, Ranger, Wizard, and Fighter. These additional packs substitute a player’s starting cards. Each pack comes with a Character Card that notes the starting health, two Health-Tracking cards, two special ability cards, and a ten-card starter deck. Each character’s starting deck consist of different variations of gold, actions, and champions.

The rules also include several variations for multiplayer games including team play and a massive six player game called Emperor. The character packs also hint at a cooperative campaign playing experience which you can check out at www.herorealms.com/coop (once the link is live).

I should start this review by prefacing it with the fact that I love Star Realms, the predecessor to Hero Realms. It is a simple to learn, fun to play, space themed, head-to-head deck building game that rocks!!!

If you have played Star Realms you can definitely play Hero Realms as most of what you do is the same in both games. That being said there are some exceptions as follows:

Other than that everything else seems to be pretty comparable.
Hero Realms sets up quickly and the basic deck building mechanics are easy to learn. My kids have been playing Star Realms on their own for a couple years now (the are currently 7 and 9) so the 10+ for this one is right in line. It is a great intro game for anyone just learning how to play a deck building style game as they will be able to easily pick up on how it is done.
I have found that the length of each game can vary depending on how the market cards come out. There may be some attack cards that can be picked up early in the game which cause one player to become more powerful ending the game quickly. I have also had other games where a lot of health cards come out enabling players to replenish their health over and over which can lengthen the game time. Either way it is a lot of fun.
The artwork is amazing, Randy Delven, Vito Gesualdi and Antonis Papantoniou did an outstanding job of creating an amazing world to base Hero Realms around. The characters and champions are amazing and the supporting cards all blend well together. My one complaint here is that some of the artwork is a little graphic and scary for younger audiences. I may have to modify a few cards with my trusty sharpie.

Hero Realms did not disappoint, I think like it even better than Star Realms with the few extra things going on and am really excited to check out the cooperative play once it has been released. I love the feel of building up your deck becoming more powerful by collecting cards that can ally with one another for awesome combos!  There is no down time and no glitchy mechanics (closing my eyes to the scoring tools) making it a smooth ride from start to finish.

My biggest complaint has to be that there are still no official solo player rules included in the instructions. I am really hoping something will be added at some point or I will have to scourer the web to find a good option.

I am giving Hero Realms 9 out of 10 super meeples.

Check out Hero Realms on: