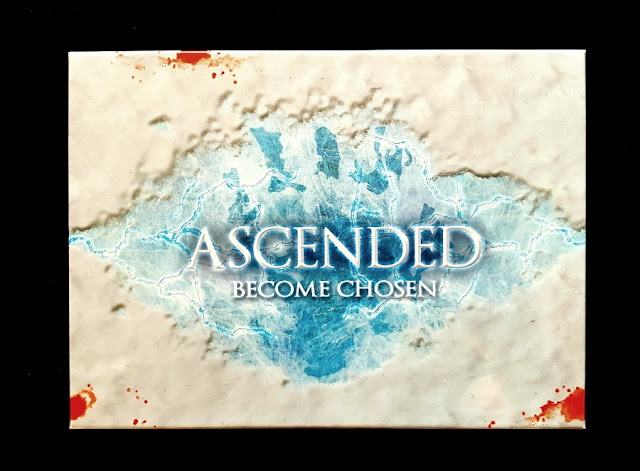 As you wake up, the cold snow kisses your face softly and your vision is blurry. The soft embrace of the snow suddenly becomes biting and painful and as you start to gain back your vision and the glare of the sun burns your eyes. You stand and know you need to find warmth and shelter. In the distance you can make out a light; possibly a shelter or at the very least a fire. You stumble in the direction of light; the cold feels like knife blades penetrating you skin. Just then you hear a noise, twigs snapping in the distance. The noise is moving closer; growing louder. Suddenly you realize whatever it is, is behind you. Y begin to panic and then feel a strange sensation, your hands changing into claws, your skin starts to ripple and form scales. What are you and how is this happening? Let’s uncover the truth.

Ascended is a gateway Euro game with gameplay lasting between 60-90 minutes for 2-4 people. This game can best be described as a mix of Strategy, Exploration, Fantasy and some Role-Playing, all in one exciting, unpredictable experience.

You start the game by choosing a path to Ascension and all players play under the same scenario. There are 3 to choose from which are:

You need to kill a particular opponent. To choose roll a D6 and follow the below chart

If any player is nominated for destruction more than once, it will activate one Mutation Card for free at the start of his first turn, and he will draw a new card after that.

The game is composed of a maximum of 40 rounds and has two cycles: Daylight and Darkness. They switch at the end of every 10 full game rounds, until the game ends – starting with the Daylight phase. When the cycle changes all terrain tiles are flipped over, keeping their relative position; At the end of Round 10 (1st cycle change), players will join their maps.

Each turn has 3 phases: Move, Decide and Breathe; See the picture below for a quick reference guide to the different Phases. The Player Card also displays your vital signs which are also listed below:

Energy – Energy allows you to activate artifacts, move faster and recover lost Hit Points. The minimum at any given time is 0 and the maximum is 10. You begin the game with 0 Energy. You can earn energy from terrain and in your Decide Phase – Hunt.

Health – Health Level is based on Hit Points, that are reduced when you sustain Damage. You start with 10 Hit Points and exit the game when you reach 0. You can recover one or more Hit Points (HP) by spending 2 Energy per Hit Point during your turn’s Breathe Phase – Heal.

Control – Control allows you to activate and protect your Mutations, and go unnoticed. You can increase one or more levels of Control by spending 2 Energy per level during your turn’s Breathe Phase – Focus. 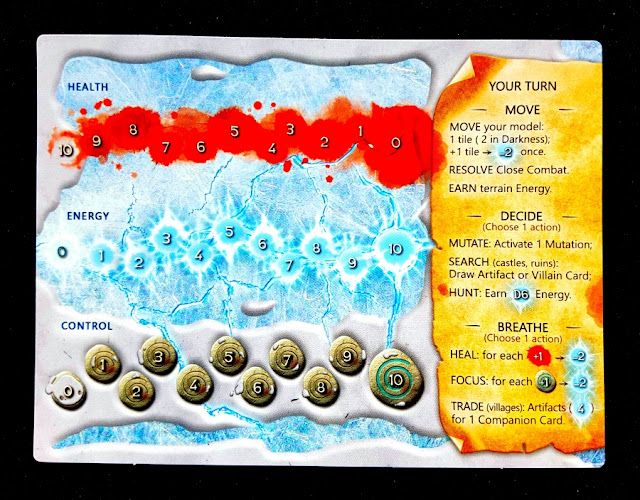 While Playing Ascended there are several cards that appear in game to help assist you and others like Villains that you will need to defeat. Here is a brief rundown of each card.

Villain Cards – Villain Cards are activated (no cost) when drawn during your Decide Phase – Search. Upon activation, you enter Close Combat (counts as attacking) with the Villain.


Companion Cards – Companion Cards are instantly activated (no cost) when you draw them during your Breathe Phase – Trade. They remain active until they die or you discard them. You can have a maximum of 2 active Companion Cards.

Artifacts Cards – You can activate Artifacts with Energy at any time during your turn and trade them in a Village (earning points) during your Breathe Phase – Trade.

Mutation Cards – Mutation Cards can only be activated during the Decide Phase – Mutate. Mutations will remain active until destroyed or you discard them (at any time). Remember: the maximum sum of all your active Mutation Cards is 15 Control. 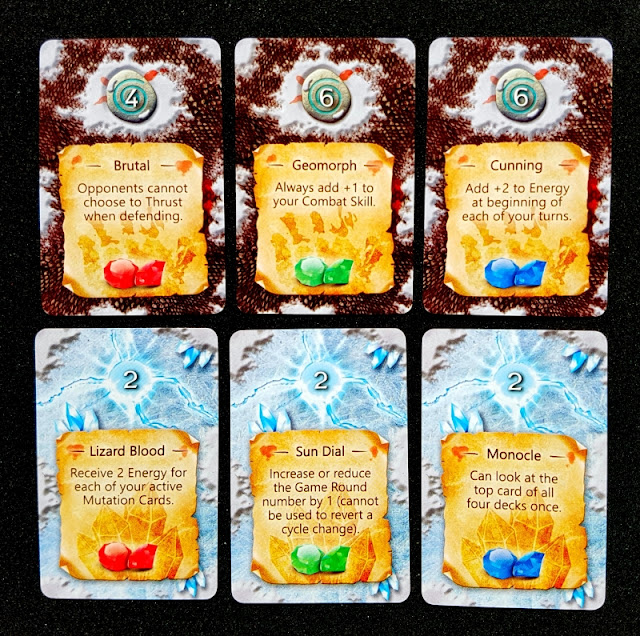 I know there are a lot of things to remember, but you can download a copy of the rules HERE and watch 8 short videos that go through every aspect of the game.

When I got the email about Ascended, I must say I was both intrigued and unsure. As I tend to be more of a small box game fan and don’t play a lot of Euro style games. But the theme of this game had me so intrigued I had to get it. The idea of playing an ascended being in a world of uncertainty, having your body and soul changing while looking for ascension. The theme just had me hooked and it was too excited to pass up. 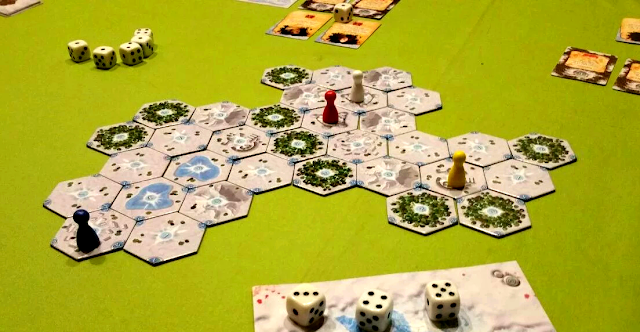 So I played this with two of my friends down from Brisbane. One who plays a lot of Magic the Gathering and occasionally goes to a board game night here and there and his boyfriend. Ty’s boyfriend who isn’t much of a board gamer thought we were just playing Monopoly or Uno when I invited them to play board games with me. So we went through the rules with him and showed him the tutorial videos on the website. Which is a great touch may I say and wish more companies did this. Nick seemed to understand so we sat down to play. We decided on the Yellow Moon Path to play, as it didn’t have any combat and thought this would be the easiest to start with. Nick seemed to take to it little slow, but we made sure to talk him through it. Then turn 10 happened and Ty and I realized we had been played. We thought Nick was not fully understanding it or just taking a while to get into it, but when all the tiles were brought together he had the most control points. And the way he put the three different sections together made us realize he had had a plan the whole time. He joined them in a way that had both Ty and I at the opposite side from the Castles and Ruins in play. I have never been more annoyed and yet impressed while playing Board Games. Once Nick had laughed his way to victory, we played the other two Paths. This time we were more mindful of that cheeky little Nick.

Ascended really is an amazing game and though the rules can look a bit confusing at first, the videos help a lot. Nick said he roughly understood the rules from the reading rule book but it was the videos that gave him a better understanding as they were easier to visualize. 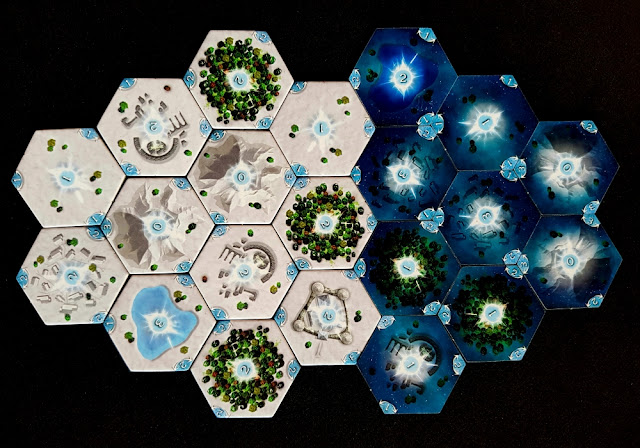 I must say, I am really starting to enjoy gateway games. I am still a small box fan but games like this really gets my blood pumping. The resource management along with the long game strategy was wonderful then throw in a little dice rolling Combat and I was hooked. I really enjoy having to think and play the long game which really tests your skill rather than your luck, and allows you to make mistakes and fix them. Ascended really does do this beautifully, it is a balancing game where a mistake isn’t going to throw your game into turmoil so that you can’t bring yourself out of.

Ascended’s theme is amazing and the intrigue continued too excited us after we finished playing. It is a theme that is a bit out there and might put of some gamers off, but trust me it is so so worth it. And I have heard a secret that they are already working on a prequel. But shhh….. don’t tell anyone.

Like any game this one isn’t without fault, I wish the Player Cards were made out of the same material as the Tiles rather than regular playing card stock. I also wish they did more with the other game components. For example the simple pawns are perfect for playing, however I would have liked meeples. I do love meeples! I also like the idea of the tiles turning from day to night, however when you get to round 30 it can be quite time consuming to flip them all over. That said it is also one of the mechanics I found most clever about this game. So I am okay with it but some players might not enjoy it as much.

Overall this is a great gateway Euro game. The theme is amazing and the game play and strategy is super fun. I truly enjoyed this game more than I expected and have played it several more times with others who have enjoyed it just as much. Also after my play through with Ty and Nick, I received an email in regards to a solo player mode, which I haven’t played but did look through the rules. It looks pretty impressive and entertaining.

The crew at Saved Games seemed to make Ascended with passion, and that passion shows through. They have a well thought out game and they have gone far beyond most games I’ve played. The simple videos focusing on specific elements of the game makes it easy for people to learn and allows you to clarify the rules if confusion arises. With the solo play mode and the announcement of a prequel to further extend the story Ascended has a ton or replay value.

This game truly is a smart well thought out game that you definitely need to add to your collection.