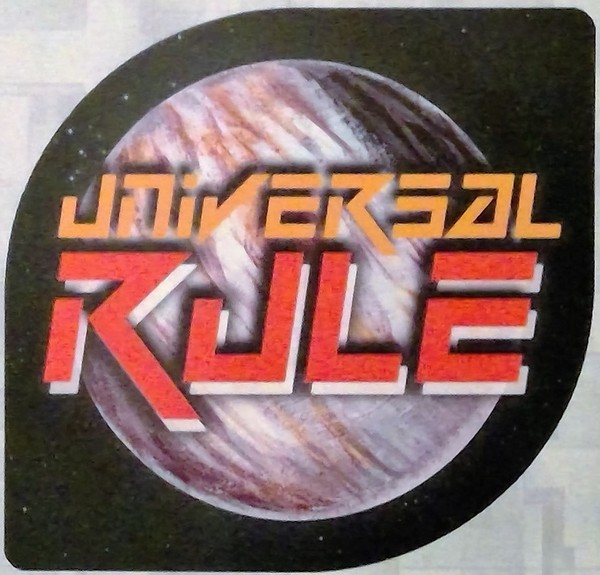 WARNING: This is a preview of Universal Rule. All components and rules are prototype and subject to change.

This tiny game packs a punch! I didn’t think I would enjoy a game that showed up with only eighteen cards, but this game was far better than expected.

To set up players are dealt three planet cards and select two to start the game with. Each player is also given three credits to begin with and that is it, players are ready to start.

On a player’s turn they can choose one of five actions (basically a 4X game with a variation on the eXpand to give a 5th option): Explore– Add a card to your hand (up to three max), Colonize– Play a planet card, Upgrade– Flip a card to a more expensive planet, Produce– Earn additional credits (up to five max per planet unless directed otherwise), or Attack– A complex battle between two players planets. Each action costs or produces credits, and any player can “follow” an action (except for Attacks) for a certain number of credits.

Play then continues on to the next player with the same choices, and the ability of the other players to follow at an additional cost.

The Attack phase is fairly complex with all players being able to join in and support an attack or help defend the attack. A successful attack results in the defending planet being downgraded or destroyed, and the player who contributed most to the attack immediately takes possession of the Universal Rule card which gives 6 Victory Points to the player who holds it.

At the end of any player’s turn, if they have a set number of Victory Points (15 for 3P, 13 for 4P and 11 for 5P) for a win, the game is over, and that player wins. Besides the stars on cards, some planet abilities add or change the way Victory Points are calculated, also every five credits can be counted as a Victory Point.

Rules and Setup:
The rules are still in progress. I am hoping this is the area the publisher spends some time making sure things are tightened up. After some back and forth with them we got the attacks figured out which made the game so much more enjoyable than how the rules initially outlined!

Setup was as easy as it comes. Deal three cards and three credits and everyone gives a card back. I like simple!

Theme and Mechanics:
The theme was a fairly standard space themed 4x game, and was fun.

The game is much like any other card/tile playing game. The mechanics were mostly clean, with the hardest thing to do was keeping track of maximum credits or cards, which is not that hard!

Game Play:
The game is easy to play and goes pretty quick keeping all the players in the game and focused. The first four options for a player’s turn go quickly and are easy to follow, the attack takes a little more time, but still involves all of the players. Once we figured the attacks out, the game played much smoother. The publisher list play time as 30-45 minutes which might have been longer than most of our games.

They also listed the ages as 12+ (at least where I was looking) which surprised me. I would say that it is simple enough for an 8 year old to play. My 9 year old played several times and enjoyed it.

Artwork and Components:
The artwork was pretty good for the little space that is left for it on the card. The planets look pretty cool too!

The cards were good quality playing cards. The Kickstarter campaign includes an upgrade to include credit counters. I didn’t mind using my own change, but it does increase the weight of the game.

The Good:
The game was pretty involved for a game that comes with only eighteen cards. Game play was fun and kept everyone involved. We enjoyed the pace, strategy and mechanics of the game once we figured it out.

The Bad:
I think there are two issues in the prototype game. The first was clearly the rule book. I think the designer was trying to keep it concise (which is good), but it didn’t spell out the attacks in a way that we could follow. The second issue that I saw (which is strictly my own opinion) was that in larger games the Universal Rule card was a little too powerful for my taste. A player who wasn’t close would make a single attack and have enough points to win.

Final Thoughts:
I am a fan of this simple but complex game. For the size and space it takes up (along with the Kickstarter backer price of $10), you get a lot of game.

Players Who Like:
This is a fairly standard 4X game, and out of the games I have played I would compare it to Eminent Domain. Not as many cards, but probably as much fun!

I am giving Universal Rule 8 out of 10 super meeples.

Check out Universal Rule on: