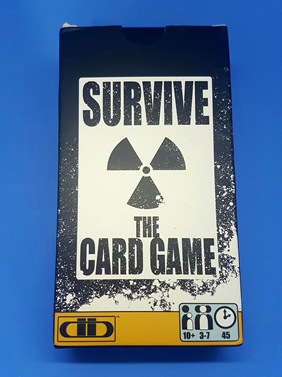 As the howl of a distance wolf wakes you from your sleep. You almost forget what has happened to the world and for a second, think you are simply camping. But realization sets in as you look up at your tent, it has seen better days, but it should last another night or two. You swallow your last mouthful of water which was so refreshing, but you know you will need to find more. As you unzip the tent, the reality that this isn’t a dream hits even harder. Then you smell the fowl odor of burning tires around the corner. You can’t believe the apocalypse happen? Why did it happen? Who or what caused it? And why are people acting like savages? None of that matters right now, all that matters is that you survive!

Once you have shuffled the cards, Deal five cards to each player and hand them three life tokens. In the first round, discard any Beast cards in your opening hand replacing the discarded with cards from the Search Deck.
Each round is broken up into two phases: Search and Negotiation.

SEARCH PHASE – In the Search phase each player takes it in turn. The player who hasn’t eaten for the longest time goes first.
First, you can place any number of cards from your Hand face up into your Stockpile. There is no limit to the number of cards you can have in your Stockpile. You can also discard any unwanted cards onto the Trash Pile, and then redraw your hand to five cards from the Search Deck. You may never have more than five cards in your Hand. You can only draw once per round.

Any Beast cards that you draw from the Search Deck must be placed face up in front of you. This indicates that you have been attacked by one or more beasts whilst searching, and must defeat them to avoid losing any Life Tokens.

Once you have drawn from the Search Deck play moves to the next player on your left. Once every player has had a turn the phase is over.

NEGOTIATION PHASE – All players now negotiate at the same time and with anyone they choose. Players with missing resources should do their best to attain them from other players to avoid losing any Life Tokens.

The only rule to negotiation is simple: you can’t steal cards from another player’s Hand or Stockpile (actually, there is one exception to this which is explained below under Weapons). You can trade, haggle, swindle, beg, coerce, threaten, lie, manipulate, make promises, break promises, form alliances, betray alliances, seek revenge, avenge others, be helpful, be unhelpful, do nothing, or do anything that you think might help you to win.

You can play any number of Weapon cards during the Negotiation phase. Once a Weapon has been played it is discarded onto the Trash Pile.

The phase is over when the majority of players agree that they’ve finished negotiating.

Each player must now discard one of each resource — Food, Water, and Shelter — onto the Trash Pile. These can be discarded from the player’s Hand and/or Stockpile.
• For each resource not available to discard, that player loses one Life Token.
• For each Beast card still in play on the table in front of them, that player loses one Life Token, and then the Beast card is discarded onto the Trash Pile.

Once a player loses all of their Life Tokens they are out of the game. 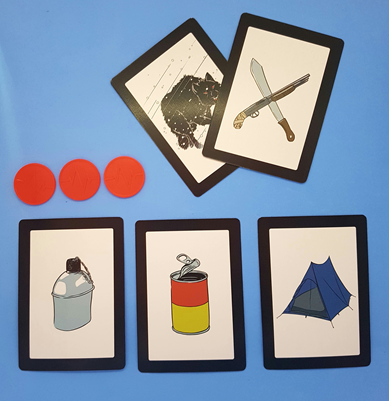 If every player is removed from the game in the same round, then nobody wins.

Let me just start by saying this, I need new friends! My friends are a batch of backstabbing As……. people! (Sorry kids almost said a naughty word!). If there ever is an apocalypse, my first thing is moving as far away as possible. I do not want to be anyway near my old Tafe buddies when it finally happens.

So as you can tell this game has ended several friendships, but this is a super fun game and really easy to learn. I believe we were in the second or third round and the boys had it down. There were friendships and alliances made and broken, there were broken alliances mended, it was a strange turn of events. In Survive the Card game it is all about balance; you don’t want to help too much, as you may leave yourself out in the cold, but don’t want be too greedy as no one will help you when you need it.

Survive the Card Game has quite simple mechanics, but not in a bad way. As games like Werewolf or The Resistance it all comes down to the people involved and how much you put in. I like these styles of games, as you don’t feel railroaded into what you can and can’t do; there is an element of freedom and self-expression. It also means no game to ever be the same; due to the interactions of the players. 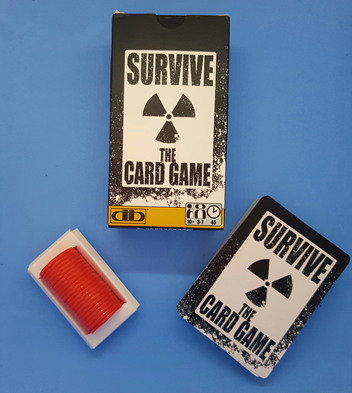 One of the things that first struck me with this game was the size. It is 120 cards, 21 life tokens and a set of rules in a tuck box the same size as my Samsung Galaxy S7, but obviously thicker. This makes Survive the Card Game a great chuck anywhere game. It is easy to learn, teach and play. Can keep a copy in your backpack or handbag and pull it out anywhere you can find a flat surface. For me personally, I love games like this. I normally always have a few small games in my backpack and I will be adding this. I find that the number of times I’ve caught up for with friends for lunch or gone to a BBQ or waiting on that one friend that is always late. So we have had an impromptu game of something. This game is perfect for that.

My only real complaint about this game is probably the art. There is nothing wrong with it, but I just believe more could have been done with it. For example, the cards below you can easily make out each card type, but part of me wants to more backgrounds to make it feel more apocalyptic and even some variation of pictures of the different items would be nice too. This doesn’t affect the gameplay, it’s just me loving game art and being picky. 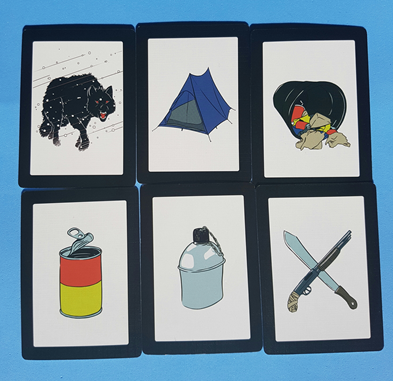 Normally when I’m told I’ll be reviewing a copy of the game, I like to check it out a little online by viewing there website and their BGG site. But with Survive the Card Game I only had time for a quick search and couldn’t find a lot online about it. So didn’t know what to expect, but was very pleasantly surprised. This is a great little game, actually a lot better than I expected. But as I mention before, like Werewolf or The Resistance, it all depends on how much you get involved. Involvement is the determining factor with this game. If like me, you like Werewolf or The Resistance, I would definitely check out this game. You will really enjoy it.
Please Note: friendships will not be the same once you finish!

You can purchase a copy of this game at DB Games store. (Price is in Australian Dollars)

Derek ‘Dez’ Maggs comes to us from the Land Down Under. He has been bit
of a fanboy of miniature games, growing up with HeroQuest and moving into Warhammer Fantasy and 40K. An avid RPG & causal Magic the Gathering player. But his heart and passion lies in board and card games. Feel free to follow him on Twitter @Derekmaggs81 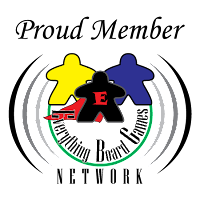