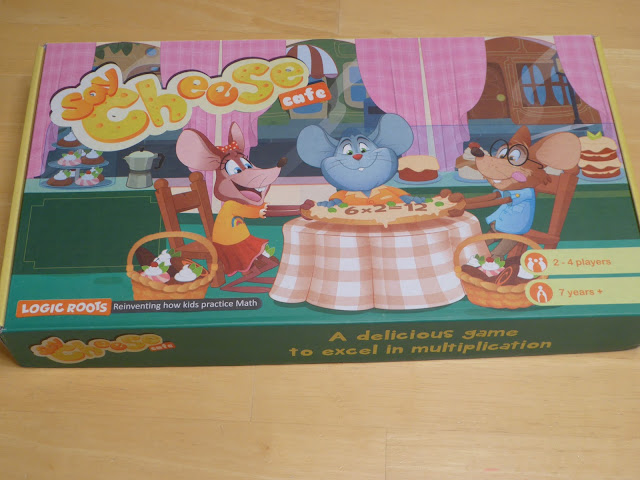 The second game in my Logic Roots review series is Say Cheese. This is also a math game but focuses on multiplication as opposed to addition.

To set up Say Cheese players place the spinner and basket in the center of play. Players then take the pizza tokens (each one having a number on it) and divides them into roughly equal piles to the number of players (IE four players, four piles). Finally each player is given a draw bag in which to place their pizza tokens.

The starting player is determine by each player drawing a pizza token from their draw bag with the highest numbered token winning. The first player will then spin the spinner and choose which number she would like to use for the round (there are two numbers per space). For example the spinner lands on the “2, 6” space and she chooses the 6 which will now be the multiplication table used for this round. She will now draw a pizza token (blindly) from her draw bag and toss it into the basket. The next player will also draw a pizza token from his bag and toss it into the basket. If the number on his token is a factor of the selected number, that player will call out “Cheese” and then recite the multiplication fact. For example 6 was the chosen factor and player two draws a token with the number 36 on it. He throws it into the basket and says “Cheese, 6 times 6 equals 36”. If he is correct he gets all the tokens in the basket and places them in front of him. If he is incorrect play goes to the next player.

If the player was correct, a new round begins and that player will spin the spinner to determine a new factor to use. He then throws in his token and the next player takes her turn. This continues until one player has run out of pizza tokens at which time the player with the most tokens wins!

I also made a variation for younger players (pre-school aged) where you are just matching the chosen number. For example if 4 was the chosen number and a player pulled out a token with 14 on it they could say “Cheese” and say the number and what was being matched (the 4 in 14 in this example). It worked really well for number recognition with one of my younger child.

Again I will preface this review with; I am looking at the educational merits of the game and not necessarily on whether or not this game will win the Spiel des Jahres. Please keep this in mind.

Say Cheese is a little more complicated than Ocean Raiders as it is intended for older kids. The set up and game play is still straight forward, however the rules were lacking on this one. My copy of the rules had a few pages that repeated themselves and nothing in them explained what the extra basket or tokens were for. I had to make that up myself.

After getting through the rules I found that the game play was challenging and fun for my oldest son. The pre-school variation was also enjoyable for all the kids.

The components on Say Cheese were a little better than Ocean Raiders. The tokens and baskets were nice quality however the spinner was a little warped. Again not bad for an educational game which is not being held to the same standards as a modern board game.

Say Cheese is a great way to work with your kids or students on their multiplication tables 1 through 9. The game play was enjoyable and engaging and kept my kids interest the whole time.

If you are looking for ways to teach math to your students or kids Logic Roots math games and multiplication games are a great way to supplement your curriculum.

I am giving Say Cheese 6.5 out of 10 educational super meeples.

After posting the review for Say Cheese I was contacted by Logic Roots with a complete set of rules. Here are the changes to the game play I found after reading through them.

There are four different types of tokens: number tokens (as I have talked about above), garbage tokens, dessert tokens, and special tokens that allow you to take tokens from other players. If a player draws a garbage token from their bag they toss it into the basket thus spoiling the other tokens and all must be thrown in the garbage basket. The round then restarts using the same factor. Dessert tokens are played and collected just like the regular tokens are however they are worth more points at the end of the game.

With these changes in mind I will be doing some more game sessions to see how this changes the overall game play. Stay tuned!

After playing with the rules from above Say Cheese played much better. The dessert tokens and garbage tokens added a lot to the game play making this educational game more enjoyable. I am revising my score to be 7.5 out of 10. Parents looking for educational math games should definitely check out Ocean Raiders, Say Cheese, and other titles from Logic Roots.

Check out Say Cheese on: