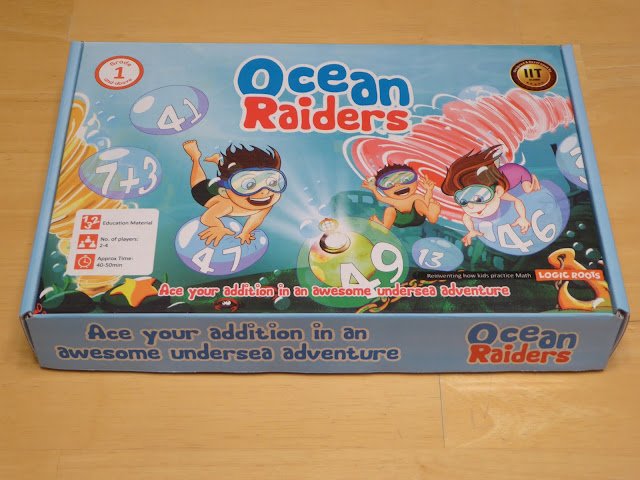 My next two game reviews are going to be for educational games from the same company—Logic Roots. The first game we are looking at is Ocean Raiders, a math game that focuses on addition.

To set up players place the board in the center of play and place their player pawn on the start space. Players then choose who will go first and the game begins.

For the first round players will each roll the ten sided dice and place their pawn on the corresponding number on the board. For the following rounds each time a player rolls the dice they will add the rolled number with their position on the board. For example player one is on space 9 and rolls an 8, he would then add the two numbers and call out the answer. If he is correct he would move his pawn to that location on the board (17 in this case), however if he was incorrect he would have to return his pawn to the starting space and start over. Play continues with the next players and goes until one player has reached the “49” space on the board. The first player to do this wins.

My review of these two games will mostly focus on the fact that they are educational games and not intended for hardcore gaming groups.

Ocean Raiders is a solid game for teaching younger children basic addition or for helping older kid’s stay sharp. The game is easy to set up and learn and the rules are well laid out and simple to understand.

My one gripe with the rules is there is nothing that says a player has to roll the exact number to land on the final space (“49”) or just equal to or higher then. If you have to land exactly on the last space the game tends to drag out.

At first glance the game looks and plays a lot like Chutes and Ladders even having spaces that move you ahead or behind. The board is laid out slightly different with the numbered spaces not being in order which forces the players to do the math in their head and not rely on counting the spaces.

The components are okay and the artwork is fun and attractive to kids, kind of what you would expect from an educational game. Nothing great but at the same time it isn’t terrible.

Ocean Raiders is not an award winning Euro game that is going to end up on BGG’s Hotness list, however it does a decent job at what it was created for which is teaching kids addition while having fun. My kids (4, 7, and 9) all really enjoyed it and asked to play again, so that is a plus in my book!

Parents looking for ways to teach basic math skills while also being entertained should definitely check out Ocean Raiders. Also check out other math games and multiplication games from Logic Roots. 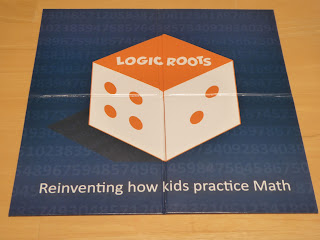 I am giving Ocean Raiders 7 out of 10 super educational meeples.

Check out Ocean Raiders on: