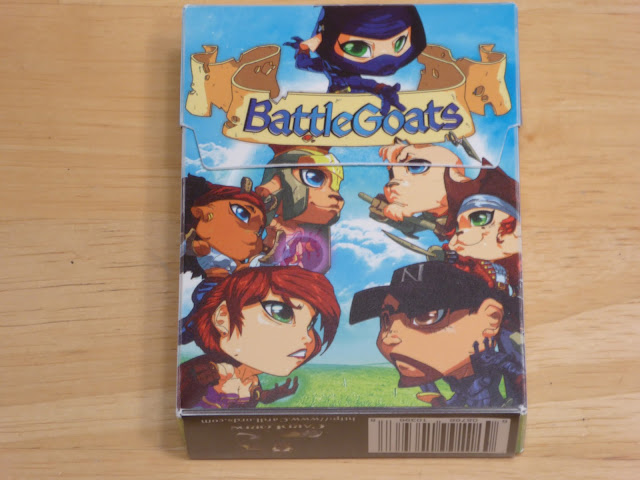 In the distant land of Goatopia the clashing of swords, the sounds of gun fire, and the bleating of goats can be heard as battle rages between two powerful heroes and their BattleGoats!

In BattleGoats players take on the role of a hero leading an army of goats (yep goats) into battle. The player who sets up the perfect battle field and successfully eliminates their opponent wins!

To set up BattleGoats players will separate out the heroes from goats (heroes being identified by the purple star icon in the upper left corner of the cards) and shuffle both decks. Players will then either draw a random hero or draw two hero cards keeping one. Next players will form their goat armies in one of two ways. The first way is to deal eight cards to each player with them keeping what they got. The alternative (and preferred method) is to deal each player eight cards and hold a draft where each player keeps one and passes the rest to the left. This continues until each player has eight goat cards.

Next players will set up their battle field (a 3 x 3 grid of cards facedown). This is where the strategy of the game comes in. In it’s very simplest form BattleGoats plays like the game War where the high number card wins. The trick here is that not only does each card have a number value but it also has text that can vary the rules/play. For instance a card might state that if it is attacking, you add +6 to the number value. So set up and placement of each card can be crucial.

Once players have their grid set up play begins. The first player (the player who set up their grid the fastest) will select one of their cards to do battle with and one of their opponent’s cards to attack. Players flip over the chosen cards then resolve, the player with the highest card value (taking text modifiers into account) wins. The winning player flips their card back over (creating a Memory game type mechanic) while the looser puts their card into their discard pile.

Play then proceeds to the next player who does the same thing. This continues until all but one player has lost all of their cards. The player with cards left in play wins!

Note: BattleGoats can be played with 2-6 players with each player controlling their own army and able to attack anyone else’s army.

BattleGoats is a super accessible game for players of all ages. The 9+ recommendation is too high, my 7 year-old easily picked this one up. I would say if your child can read, they can play. Getting the strategy down will take some time but they will catch on soon enough.

Not only is the game accessible but it is also extremely easy to learn and teach. The rules are very concise and short enabling players to get started right away.

As noted above there are a couple different ways to set up and get playing the game. For your first game I would suggest drawing random heroes and BattleGoats. Once you have the first game under your belt I would always use the drafting method for choosing your army. That way each player’s army is more balanced.

Game play is fast and fun with a ton of player interaction. Although this is a glorified twist on an old classic CardLords did a superb job of making BattleGoats engaging, strategic,  and enjoyable. The variety of cards and powers keeps you interested from game to game as different combination of cards will present themselves. The strategy of the game really comes into play with the initial set up of your battle field. Using the card’s powers to play off one another is important. For example setting up cards with bonuses for cards behind them in the front row and defensive cards behind that one is a great way to go. Choosing when exactly to play a card also becomes an interesting decision as once you play a card everyone knows where it is and will target it (or should), so play a powerful card early and it will definitely become a target quickly.

The components are very solid; great card stock which shuffles so smoothly and the box was a surprise—a sturdy plastic tuck box (sorta). Along with great components Santiago Calleriza hit this one out of the park with his artwork! If you have read many of my reviews I am a sucker for great artwork and feel it can make a huge different in how I feel about a game and this one nails it. The illustrations and layout are fantastic and really bring the theme of the game home. As I mentioned above there is a great variety of cards in the game—in fact no two cards are a like—which means there is a great variety of artwork. My boys spent an hour just looking through all the cards. 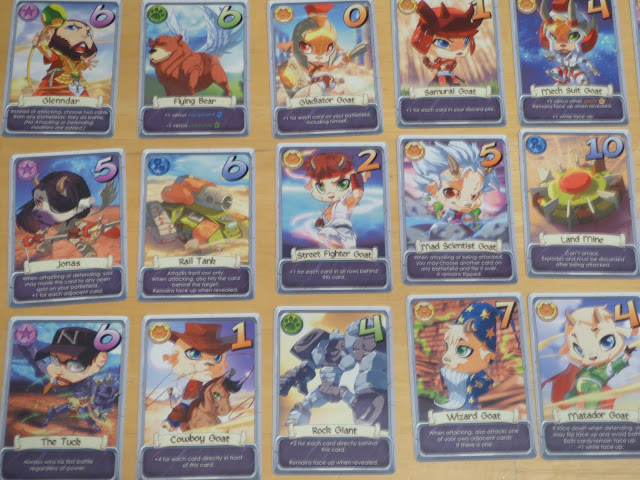 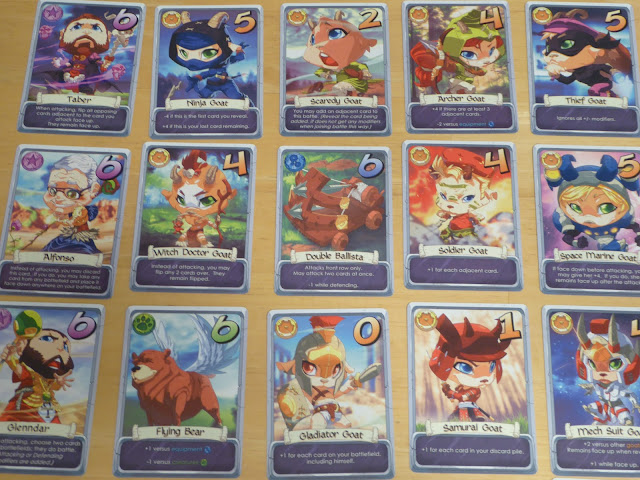 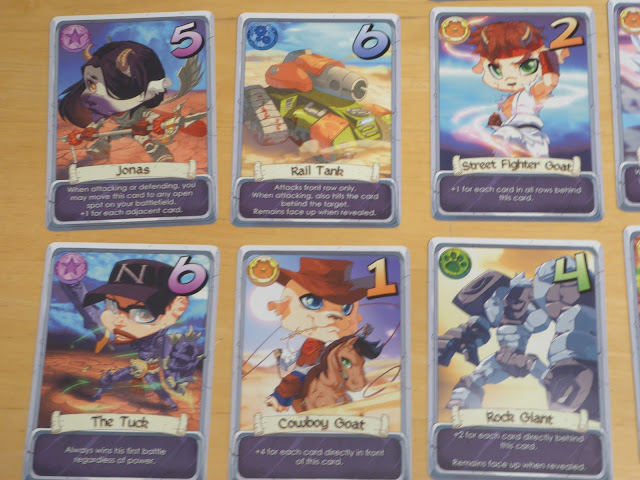 All-in-all this game was a hit with my family! It isn’t going to fill an entire evening of gaming and may not appeal to some hardcore gamers, however this is a game that will find it’s way on to many game shelves around the world with it’s low barrier of entry and it high re-play-ability and fun factor.

I am really hoping to see some expansions come out for this which will continue to add to the shelf life of the game. It is a pretty solid game for $20 and I would highly recommend it especially if you have a few younger gamers in your group.

I am giving BattleGoats 9 out of 10 super kid and adult meeples.