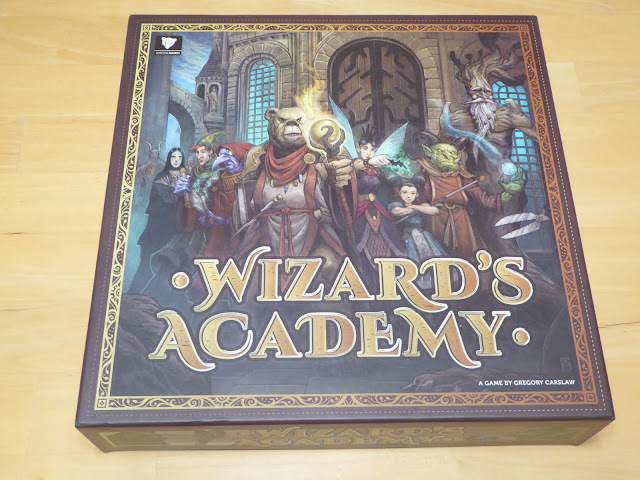 Welcome to the Wizard’s Academy, as an apprentice you will learn many spells and become a great wizard with immense power…well some day. For now you will muddle through casting the wrong spells at the wrong time in efforts to protect the academy from the powers of evil and uphold it’s values and virtues.

In Wizard’s Academy players will work together to accomplish different goals as they play through a series of scenarios that will test their skills and nerves. Accomplish the goals quickly and you and your classmates will pass, take too long or drain the Mana Crystal completely and fail.

Normally I would do a complete break down on game set up and play, however there are many ways to to do both depending on the chosen scenarios. So, I will briefly explain how to set up and play in a general sense to hopefully give you an idea of how Wizard’s Academy works.

To set up a game of Wizard’s Academy players will each select a character to play and take the corresponding player mat and miniature. Players will then set the two game boards (the Academy board and Spell board) in the center of play shuffling the Room tiles and randomly placing them on the Academy board.

Player’s now place their miniatures on the Mana Crystal room tile along with a set amount of mana depending on the scenario. Guardian figures are placed on specified rooms also depending on the scenario and Glyph tokens are placed in randomly drawn room tiles based on cards drawn from the Room deck. Lastly players place all tokens relevant to the chosen scenario nearby along with all imp, troll, and demon figures (yeah, these are cool).

To play Wizard’s Academy players on their turn will perform the following steps:

Once a player has completed these steps play goes to the the next player. This continues until the players have achieved the goal of the scenario or players have run out of mana or the Disaster deck and Progression deck have been depleted (ie time is up).
As mentioned earlier there are several scenarios (ten to be exact) and each one can be played at an easy, medium, or hard level not including the tutorial scenario. Combine that with all the different Spells cards and Disaster cards and there is a ton of re-play-ability in this game.

Rules and Setup:
Wizard’s Academy is a large game and what I mean by that is it has a lot going on. Not so much that it is overly complex but there is definitely more going on than a game of UNO. It took me some time and careful reading to get the rules down. In fact I played my first game completely wrong (non-coop, not sure how that happened). I think after about three games I finally realized how it all worked. Of course playing the different scenarios presented new rule challenges but all-in-all the game play remains pretty standard throughout those.

Don’t plan on pulling Wizard’s Academy out of the box and getting right into the play. Set up does take some time as you sort through the Spell deck and Disaster deck to set up the specific scenarios. That being said after you do it a couple times it does get easier. Especially if you have your components well organized (which is a must for me anyway).

Theme and Mechanics:
I love the theme of wizards learning spells and using them (successfully and not successfully) to defend their school from different disasters and creatures. The artwork (which I will mention more about below), mechanics, and style of play really make the theme come alive. I was easily immersed into this world although I will place and asterix here which I will get back to later in the review.

The mechanics used in Wizard’s Academy are pretty typical for a cooperative game—a player takes actions and the game takes actions. In this case the game does the action first (through the Disaster cards), but it is relatively the same. My wife said it feels a lot like Pandemic or Forbidden Desert. I agree that there are parts that are similar to those, however Wizard’s Academy has a completely different feel. The fact that not only can the game hurt you but that you can bring pain upon yourself is insane.

Game Play:
Once you get the hang of the rules game play is fairly simple as you go through the turn steps outlined above. There isn’t a lot to get hung up on unless it is to reference the rules quickly. There are a myriad of choices to be made throughout the game which all seem crucial so you don’t want to waste any turns which I really enjoyed.

Being a cooperative game the player interaction is high as players must work together to achieve the goals of the scenarios. That being said this game can suffer from Alpha Player Syndrome (APS – a player takes over the game on behalf of all players) which can be typical for any cooperative game.

The box states the game will last between 90 to 120 minutes which I would agree with. Longer if it is your first couple plays. It also states the age 12+, I would disagree here as my boys (7 & 9) can easily play. Now they would probably have a hard time playing it alone so I would set the age level at 10+.

Artwork and Components:
Wow is the first second and third thing I have to say about the artwork for Wizard’s Academy. The cover pops and begs you to play. In fact it has been haunting me for weeks ever since it showed up, sitting on my shelf looking all kinds of awesome, but other reviews needed to be done first.

The artwork translates well through out the components being very cohesive and tying everything together nicely. The one draw back here would have to be the Outer Dimension room which looks like intestines. Really? What is up with that? See set up picture bottom right of the Academy board.

When I first received Wizard’s Academy I couldn’t believe how heavy the box was (the heaviest game in my collection thus far even heavier than Star Wars Rebellion which is huge!) What makes it so heavy? Components, component, components which are amazing. The fact that they have minis in the game when tokens would suffice speaks volumes. There are six sculpts for the characters and four sculpts for the imps, trolls, demons, and guardians. And there are a ton of the latter four.

The cards, tokens, tiles, boards, and box are all of the highest quality validating the higher cost of this game. A lot of thought not only went into the game play and artwork but the components were also very well thought through. 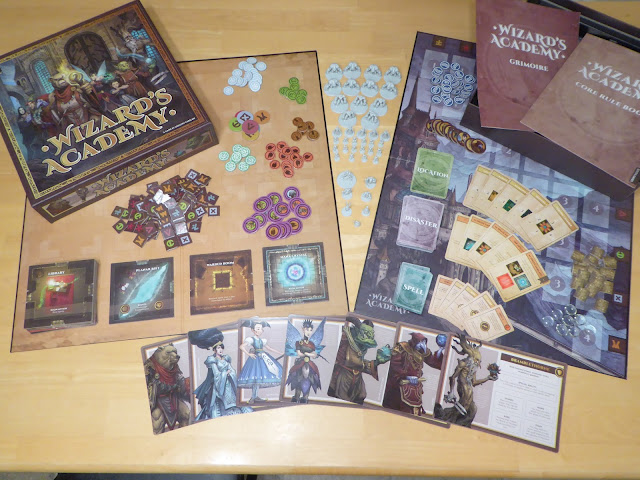 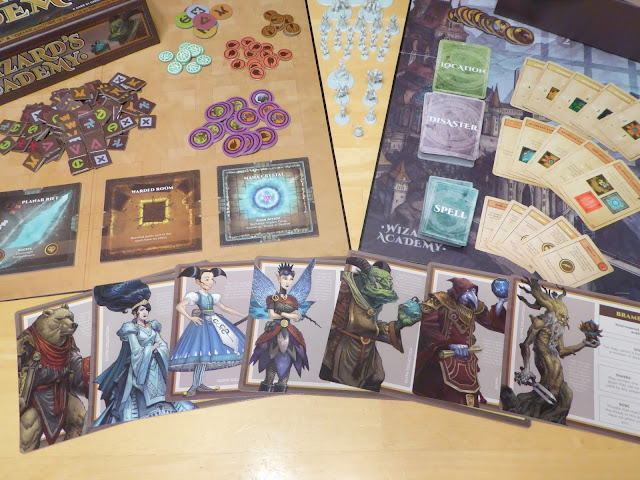 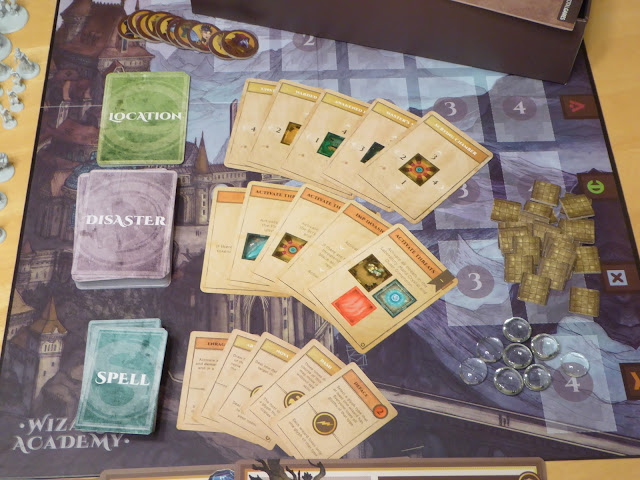 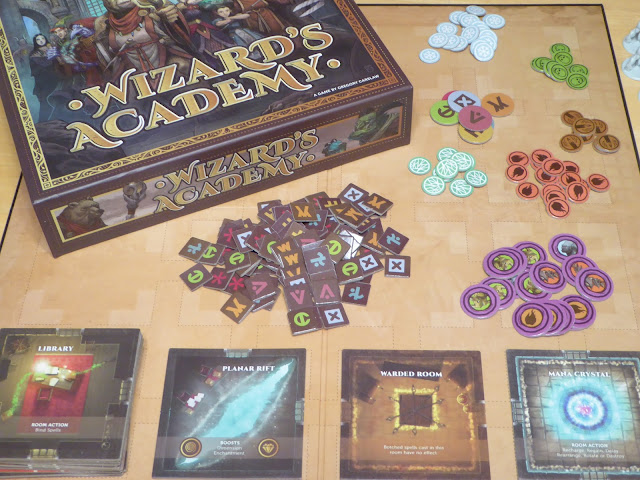 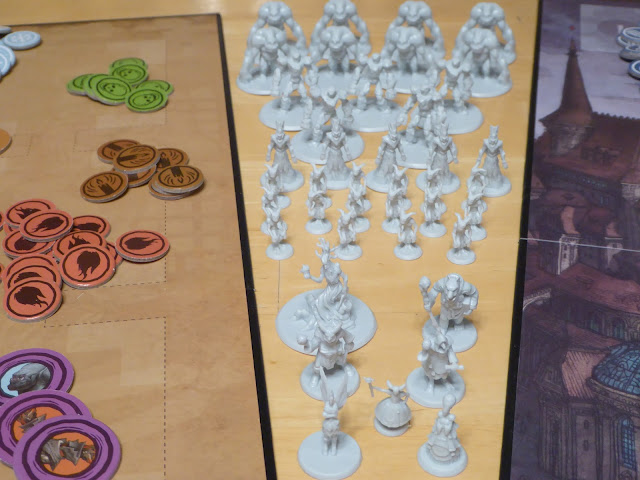 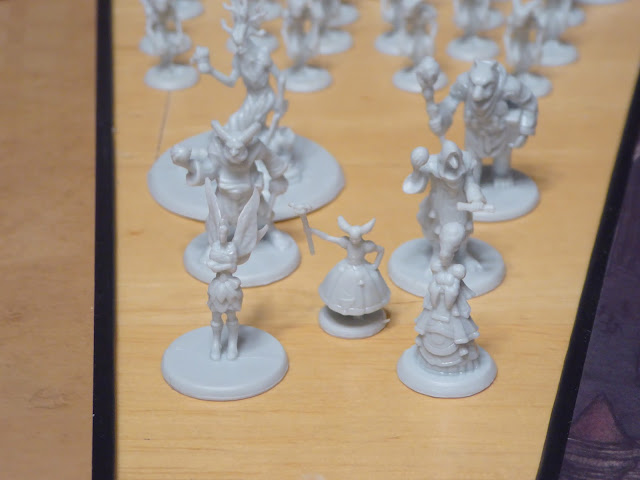 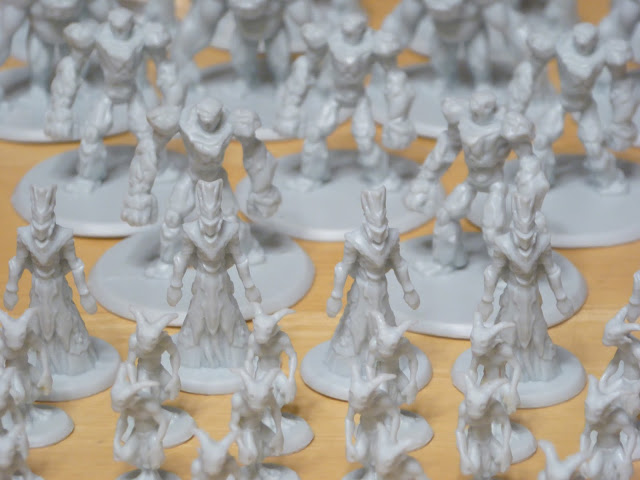 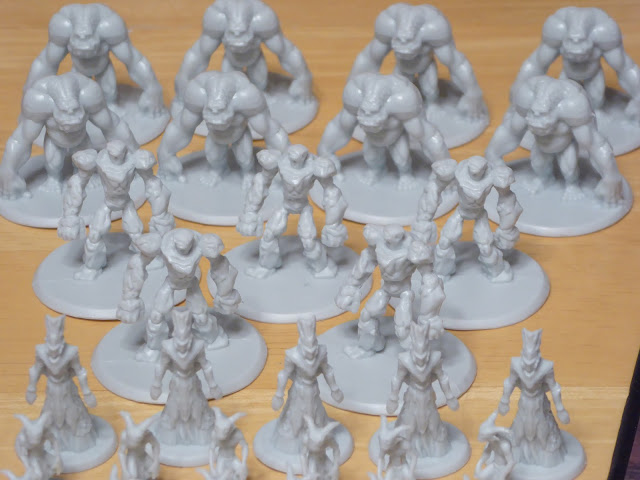 The Good:
There is so much good to say about Wizards Academy I don’t know where to start. As I just mentioned the production value of this game is on a higher level than most. The artwork is amazing and everything really ties in well to make a solid game. Game play is intriguing and suspenseful both of which you want from a cooperative game. It seems to be pretty accessible by most players and age ranges which makes it a big hit in my house.

The Bad:
Time to get back to the asterix. If I have to get knit picky on this game I would have to say the lack of a back ground story bothers me. As immersed as I get playing Wizard’s Academy it would have been so much more with a deeper story line behind it. For example there is no name of the world that this is taking place in or name for the school (beside Wizard’s Academy). I would love to know more about Bramblethorne, Nyvetta, Malkar, and the other characters. Why are imps, trolls, and demons attacking the school. Do they hate books? Why does the Outer Dimension look like intestines? And is the boat wood or aluminium? Wait that is a question for something else.

Final Thoughts:
Wizard’s Academy is a smash hit! I love just about every aspect of this game, it hits on all cylinders for me. I am excited to see if they continue to put out new content, scenarios or even an expansion for this. When they do I will be first or second in line.

My shelf is getting pretty full at this point but I am willing to sell off some games to make sure this one has a spot. My kids really like it too which means it will see a lot of playing time.

Players Who Like:
Players who enjoy cooperative games like Pandemic, Forbidden Desert, and Thunderbirds along with engine building games like San Jaun, Race for the Galaxy, and Harbour will love Wizard’s Academy. Also in general people who like to breathe air will like this game.

I am giving Wizard’s Academy 9 out of 10 super meeples.

Check out Wizard’s Academy on: