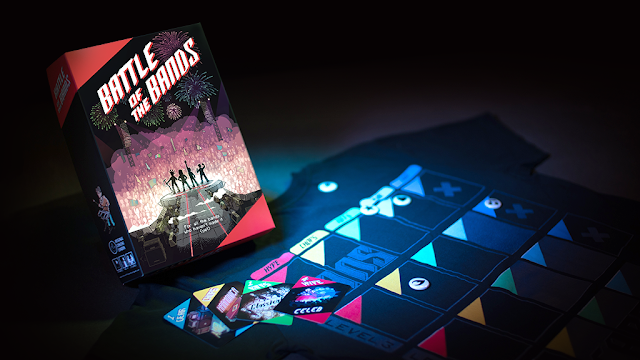 As the final note is slowly fading away, and the slight buzzing of the amp is all that can be heard in your garage. You and your fellow band mates stand there in silence surround by posters of the Stones, Pink Floyd and Zeppelin. The awe and excitement is too much, that was the best rehearsal you have ever done together. You look at each other knowing you are ready for the gig tonight; knowing this will be the first of many; knowing that your journey to becoming the Rock Legends is about to begin. Soon your name will be in lights and young boys will have your posters on their walls. 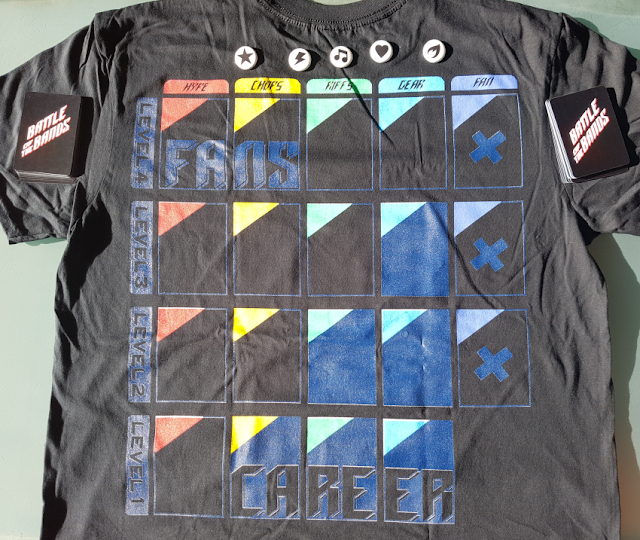 Game play starts by shuffling the passion cards and dealing two to each player, putting any extras back in the box. This is what inspired you to go into music! Tell your backstory to the other players. The player who tells the best backstory goes first, and players take turns clockwise.

On a turn, you can do one of two things:
1. Stay home and Practice – Draw one career card.
OR
2. Go on Tour – Become tour manager and try to put together a tour.

A tour has five phases. Here’s a quick overview:
1. Assemble the Band – The tour manager tries to put together a valid tour using career cards. They have to fill rows of the tour grid with cards of the right suit. They can use the cards in their hand, or allow other players to contribute their cards for a share of the spoils. If players contribute cards, they also negotiate a card to put their badge on. Badges do two things: determine the picking order of the spoils, and mark cards that players get back after the tour.
2. Reveal the Spoils – The placement and value of the career cards used on the tour determine the amount and type of spoils the tour produces – a combination of career cards and fan cards. The board is divided into “fan slots” and “career slots”. Cards on fan slots produce fan cards and cards on career slots produce career cards. High value cards produce more than low value cards. The spoils are dealt out face up on the table into one pot.
3. Divide The Spoils – Tour manager gets first pick, then band members take turns picking from the spoils, with the picking order determined by the suit in which badges were placed.
4. Clear the Grid – Band members get back the card that was marked with their badge in the first phase. The rest of the cards used on the tour are discarded.
5. Tour Manager Hand Limit – The tour manager (only!) reduces their hand to seven cards by discarding career cards or banking fan cards. Players can avoid this by staying home and practicing.

Play continues until one player has 27 fans or more.

I love the theme of this game, coz lets be real, we have all dreamed of being a rock star. Standing in front of a crowd; having fans screaming your name; and the fame and fortune. But alias it is not to be for all of us. As someone who’s brother has played in several bands over the years and also having been to several battle of the band competitions over the years, this game and theme really hit a cord with me (no pun intended). To be honest, when my brother is down over Christmas I plan on playing this with him, I think he’ll get a real kick out of it.

So I played this game with my old Tafe buddies and like most people that have read the setup already have probably thought, what the game board is a t-shirt? Yep, strange I know but kind of cool and refreshing that people are pushing the envelope of game design. Not to mention, when Big J spilled his beer on the game board after winning a game it wasn’t a complete catastrophe. Nothing a washing machine and a clothes line couldn’t fix.

This is a super fun game and really makes you feel like a tour manager at times. With Band members pulling out of the tour half way through negotiation or having band mates arguing over who gets what career. It is stressful and yet so much fun. The negotiation in this game is truly the best bit. It is tough because everyone has their own strategy and you have to work out what that is and play against it.

I’m a lover of all things 8-bit, so the art of this game makes me so happy. As it almost feels to me like an old school video game I would have played as a kid. I think the art choice for this game is a very clever one, as it is a little different but in a good way. I feel it is better than just photos of gear, instruments and etc which would make it feel too realistic and lose that gamey feel and vibe. I really like that you can go on tour and have some of the strangest tours, some so strange you actually think to yourself I would go to see them just to see how it works. For example, the first tour of our first game was the below:

Seriously though, who doesn’t want to go see the album launch of a punk panpipe band with free face painting called Anarchy Blows.
I won’t lie, the t-shirt is a great touch and the idea of ripping of your t-shirt to play a game in the dressing rooms is pretty rock star, but I do wish there was an actual game board as well. As I would never wear the t-shirt knowing if I stain it or if the color fades, I can no longer play the game. I think that is a bit of a missed opportunity, as you could have people wearing the t-shirt out and about but still have a way of playing the game if you t-shirt is in the wash or you are currently wearing it.

We also found while playing this, that sometimes the game can be dragged out as there are so many 0 value career cards. We had one solo tour that once players received there spoil cards they got mostly 0 value career cards after a rather successful Tour.
Overall, this game is a lot of fun. The art is awesome, though I do have a soft spot for 8-bit style graphics. Some of the combinations are ludicrous and the negotiation aspect is probably my favorite part. I can’t wait to play this with my brother over Christmas and *David Spoiler Alert* will probably be getting him a copy for Christmas.

Check it out on Kickstarter now. Campaign ends November 3, 2016.