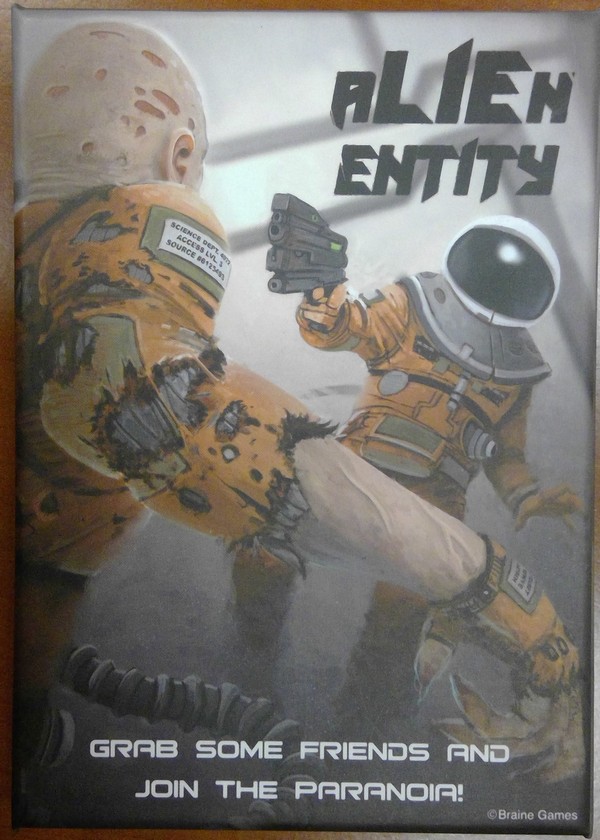 You and your team of astronauts set out to explore a hostile alien planet risking life and limb. You quickly discover one of you has been infected and has become an alien, but no one knows exactly who. The secret alien attempts to infect the rest of the astronauts while in turn the astronauts try to identify the alien in order to eliminate it, or put together the necessary pieces to build a satellite array to notify mission control to get them out of there.

To set up the game players take one of the identity cards, one player will take the role of alien for the round while the rest will be human astronauts. The identities are not revealed.

On their turn, players draw two cards from a central pile. The player then has multiple options to reduce their hand to two cards; they can play a single card in front of them that is either a piece of the satellite array or offers some kind of protection, shoot another player with the appropriate cards, pass cards to other player(s), or discard to a face down discard pile.

There are also several message cards that can be passed between players in order to share clues (whether real or deceitful) with other players.

Only the alien can pass infection cards and once another player receives one, they become a part of the alien team. There are cards that can negate the infection. The alien’s goal is to infect all other players.

The human astronaut players work together (until they get infected) to build the satellite array, or to eliminate the alien. There are three components to the array and an individual player must play all three. (Multiple players may have components of the array and the alien may play components to throw the others off). When a player shoots another player, they receive positive points for shooting someone from the alien team and negative points (-3) for shooting another human. If the player shot is not the alien, play continues, but the shot player is out of the rest of the round.

The round ends when the humans win the round by either eliminating the alien or by completing the satellite array, or the aliens win when all astronauts/humans are infected. Points are awarded for different players depending on the outcome (1-3 points for winning team players).

The winner is the player who gets 7 points first.

Rules and Setup:
The rules were a bit confusing and because of that we sometimes resorted to what we thought the rules should be.

Set up is easy, players each receive 2 cards, trading in any infection cards before identities are passed out. Then players receive their identities. The remaining cards are stacked in a draw pile at the center of the play area. Quick set up allowed for quicker play in between rounds.

Theme and Mechanics:
The theme is an interesting twist on a common game style (mystery player taking out others while being hunted themselves). The tie in of astronauts with the different components (ie. satellite array, sabotage kit, etc.) is fun and works really well.

Mechanics are a little spotty. Infection cards are not allowed to be used by humans and must be discarded, but discarding them identifies you as a human. It can be done without disclosure, but it is tricky to understand when you start. The message cards are not all that useful, but get passed around a lot which doesn’t do much for the game play. The alien either gets lucky and draws infection cards, or doesn’t. If they don’t the odds are stacked against them.

Game Play:
Play was fast once we figured it out. The three player game is not that interesting since identities are easily figured out, the four and five player game overly stacks the odds against the alien. There didn’t seem to be a happy medium.

Age recommendation is 13+. It wasn’t that difficult to play (at least by the rules we played with). In fact the game was much more well received when I played with my 9 and 11 year old.

Artwork and Components:
The cards were of decent quality. I would have appreciated having a little more differentiation between the backs of the identity cards (they kept getting shuffled back into the main deck. The art work was decent but not my style. Simple but not overly plain. The game included a comic book which is a cool feature for a game.

The Bad:
I was not a fan of some of the mechanics of the game and thought it could be so much better if just a few of the kinks were worked out and the rule book was tightened up a bit.

Final Thoughts:
If this game was in early stages of development I would suggest the designer work on a few of the sticking points to find a better way to deal with these issues. However the game has been out for a while now so I am not sure changes can be made. The younger group didn’t mind some of the problems because it made the game easier for them, but I think it detracted from the game for me. All-in-all the game has a lot of potential, and maybe there will be an Alien Entity v2.0.

Players Who Like:
This is a lot like Murder in the Dark or Templar Intrigue. Players who like social deduction games may want to check this one out.

I am giving Alien Entity 5 out of 10 super meeples.

Check out Alien Entity on: