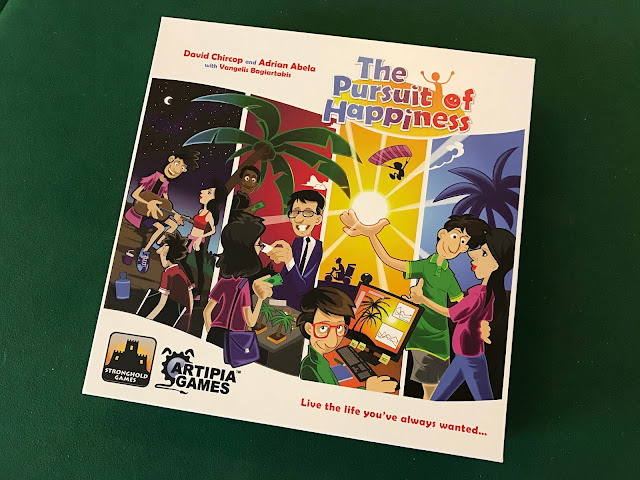 Overview
It’s a safe bet to say that most young kids who played board games probably played “The Game of Life” at some point. Fantasizing about the life you might someday have or a life you may never have has an interesting appeal to many gamers, but Life was highly luck dependent, simple, and geared toward children.

The Pursuit of Happiness takes the same theme, living out a person’s life from beginning to end, and uses worker placement mechanics to turn it into a much more interesting and strategic experience. 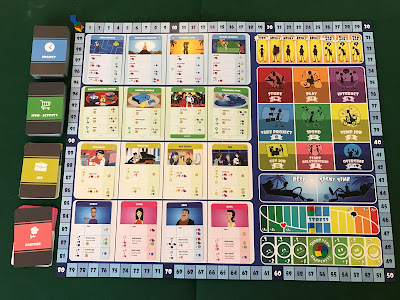 Gameplay
During the game, players are given a number of hourglass tokens to represent how much time they have to spend on different activities each round. They place these tokens on a board in order to perform certain actions such as acquiring a job, starting a relationship, beginning an activity, or buying an item. Currency in the game is made up of money and three resources, knowledge, creativity, and influence, all of which are represented by tokens. 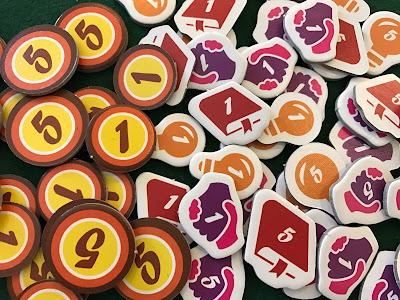 Throughout the course of each round, players must take care to maintain both their short-term happiness, which can make purchasing items either more or less expensive, their stress level, which affects how many hourglass tokens they will have during subsequent rounds as well as when their life will end, and their long-term happiness, which is the measure of victory points that will determine the final winner of the game. 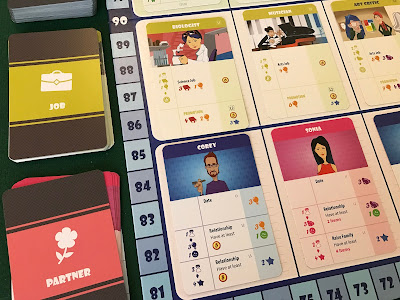 Players must strike a balance between the rewards offered by specific cards, and the time they must dedicate to those cards to reap the benefits. A job will make sure you have money to spend every round, but one or more of your hourglass tokens will need to be allocated to it to ensure that you stay employed. 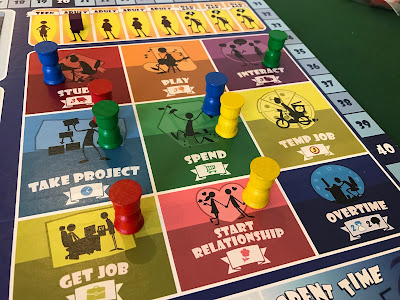 Most of the cards contain multiple levels of involvement or progress that you can move through, such as on the relationship cards when you start off dating and can eventually work your way up to having a family.

A player “dies” once their cube moves past the end of the stress track. Once all players have died, the game ends and whoever has the most long-term happiness is the winner.

Thoughts
A life-simulation game and worker placement mechanics might not seem like an ideal match at first glance, but this game has created a beautiful system that is both enjoyable and strategic. Players can play it seriously, looking only toward the finish line and a winning score, or they can approach the game in a more laid-back fashion, and simply live out a life that is funny, enjoyable, or just plain different from the one they’re actually living. 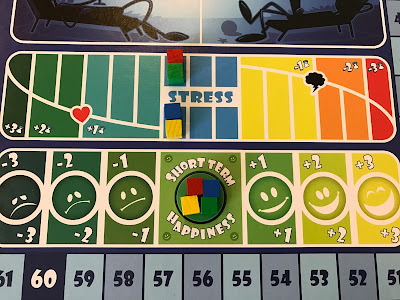 The cards and board contain spectacular, brightly-colored artwork that is cartoonish, but not in a childish way. The rule book and reference cards are well laid out and easy to utilize mid-game if rule clarification is needed. 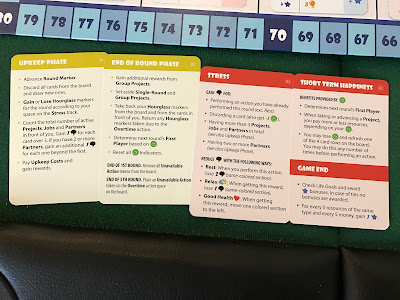 Some of the iconography and the layout of the cards can be difficult to grasp, particularly because some of the cards have similar looking iconography in similar places that mean different things in regard to how they relate to gameplay. Definitely not a deal breaker, but it can be a bit frustrating when a player is first learning the game. 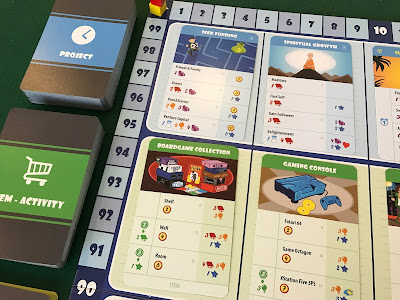 Overall, this game will help scratch that same itch that The Game of Life or even the computer game The Sims did, but with cool worker placement mechanics that even hardcore board gamers can appreciate.

The game is listed as being available for as little as $37.99 at BoardGamePrices.com.

Crystal Pisano is a word nerd and board game fanatic. She writes content for BoardGamePrices.com, co-hosts the Board Game Blitz podcast, and helps run the MeepleCon board game convention each year in Las Vegas, NV.