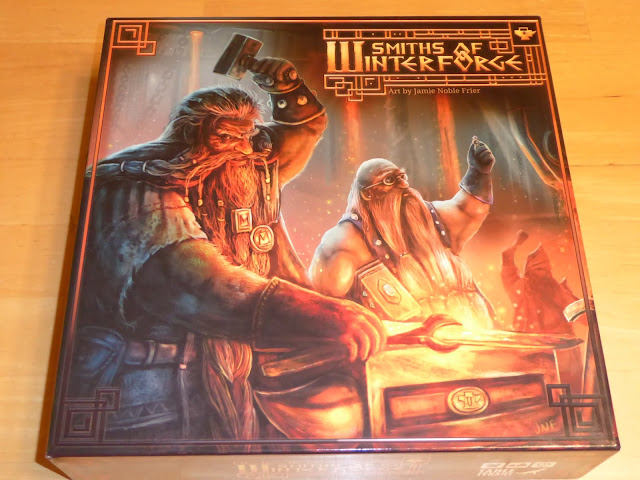 WARNING: This is a preview of Smiths of Winterforge. All components and rules are prototype and subject to change. Although I am hoping they won’t change much.

Light the forge fires and get your hammers ready the King is searching for the best Smith of Winterforge to award the royal contract to. Will you bring honor to your clan?

In Smiths of Winterforge players take control of one of the six Dwarven clans competing for resources and contracts in order to forge the best items and build their reputation. The player to do this the best by the end of the game wins the royal contract and the game!

To setup Smiths of Winterforge each player will take a player board, meeple token, three cubes of the same color, and three coins. The main board is placed in the center of the playing surface with each player’s meeple tokens being placed in the GuildHall spot. The money and work tokens are placed off to the side. The Component decks are separated into the three levels, shuffled, and three cards from each deck are dealt face up next to the corresponding deck (making nine component cards total). The Tavern deck is shuffled and three cards are dealt face up next to that deck. The loan deck is shuffled with two cards being dealt next to that deck. The contract deck is also shuffled dealing a single level one contract to each player then the number of players plus one cards face up next to the contract deck. Finally the royal contracts are shuffled with each player receiving one. The rest are taken out of the game.

Once set up is complete players determine who will go first. On a player’s turn she will take three actions either moving her meeple token between hall areas or taking one of the actions available in one of the those areas as follows:

Once a player has taken her three actions play passes to the player on the left. Play continues like this until all the contract cards are gone OR until one player has completed his royal contract.

At that point players will calculate their reputation based on the finished contract cards, skill levels, crew, and unpaid loans. The player with the highest reputation wins!

The version of the game I received also came with the Runesmith expansion. In this expansion players add an area to the board—RuneSmith—where players can purchase a Rune card for two coin. These cards can modify the requirements for a contract or give bonuses to the player.

Rules and Setup:
Smiths of Winterforge comes with a lot of components including several decks of cards, tokens, player mats, and the board. But don’t let that scare you off, the setup is relatively straight forward and easy once you have done it a couple times.

For a game with so many components the rule book is rather short, only six pages, and is very clear and well laid out. More examples would definitely help out but most issues can be resolved with a little logic.

Theme and Mechanics:
If you have read any of my reviews you know that I really enjoy fantasy themed games, so it is almost a no brainier that I would like the theme of Smiths of Winterforge. I have seen a few other titles pop up over the past couple years that specifically address Dwarven smiths (or fantasy smiths in general), however this is the first I have been able to play one.

Mechanically there isn’t a whole lot going on here. Players are taking actions to collect components (set collecting) in order to complete contracts (pick up and deliver). The final phase of that has some press your luck aspects as you may try and complete a contract with a high forge value with low dice and modifier values. This can cost a player a lot of valuable time as other players continue to complete their contracts.

Game Play:
The publisher states the game plays in 20 minutes per player making it a 120 minute game for four players and I would say that is about right. If you are playing with someone who has a hard time making choices this could get dragged out a lot.

The publisher also states it is for ages 13+. I would strongly disagree with this as I had my 7 and 9 year-old sons playing with me. While my younger son had some minor difficulties figuring out what to do in all cases my older son had no problems. I would say 10+ is the sweet spot.

There is some repetition to this game as you are gather components and forging contracts over and over, however with the ability to hire crew and take loans there can be a lot of different strategies players can use to win. Over my multiple game plays I tried a variety of different tactics and all of them seemed viable.

Artwork and Components:
Again as a warning this is a preview copy so the artwork and components may change. That being said the artwork is AMAZING!!!! I had the fortune of meeting Jamie Noble, the artist behind Smiths of Winterforge,  a few years ago via LinkedIN and have been following him ever since. I love his art and his work on this game is no exception. Way to go Table Tyrant for picking up Jamie!

I often say that the artwork can really tie the theme to the mechanics and Smiths of Winterforge really reinforces this concept. I can really feel the theme of the game as I play and it is largely due to the amazing artwork.

Even though the components are not final this really felt like a final high production value game. If the final version is better than what I received backers will be getting one heck of a game.

The Good:
When I received Smiths of Winterforge in the mail and opened the shipping box I was instantly drawn to the cover image. I wanted so badly to break open the game and see what it was all about. The artwork is the big draw for me on this one.

The game play is solid and there is a good amount of player interaction as you are hurrying to get components and contact cards.

The Bad:
My concern with Smiths of Winterforge is the repetition that I mentioned above. I think there may be some players that won’t enjoy this style of play, however this won’t be the majority.

Final Thoughts:
I love Smiths of Winterforge and have found myself wanting to play it over and over despite the number of games in the review queue. The artwork, theme, and game play all comes together to make a fantastic experience. And after all isn’t that what playing games is all about.

Players Who Like:
Pick up and deliver style games, fantasy themed games, and set collecting/crafting games will love Smiths of Winterforge.

I am giving Smiths of Winterforge 8.5 out of 10 super meeples.

Check out Smiths of Winterforge on: